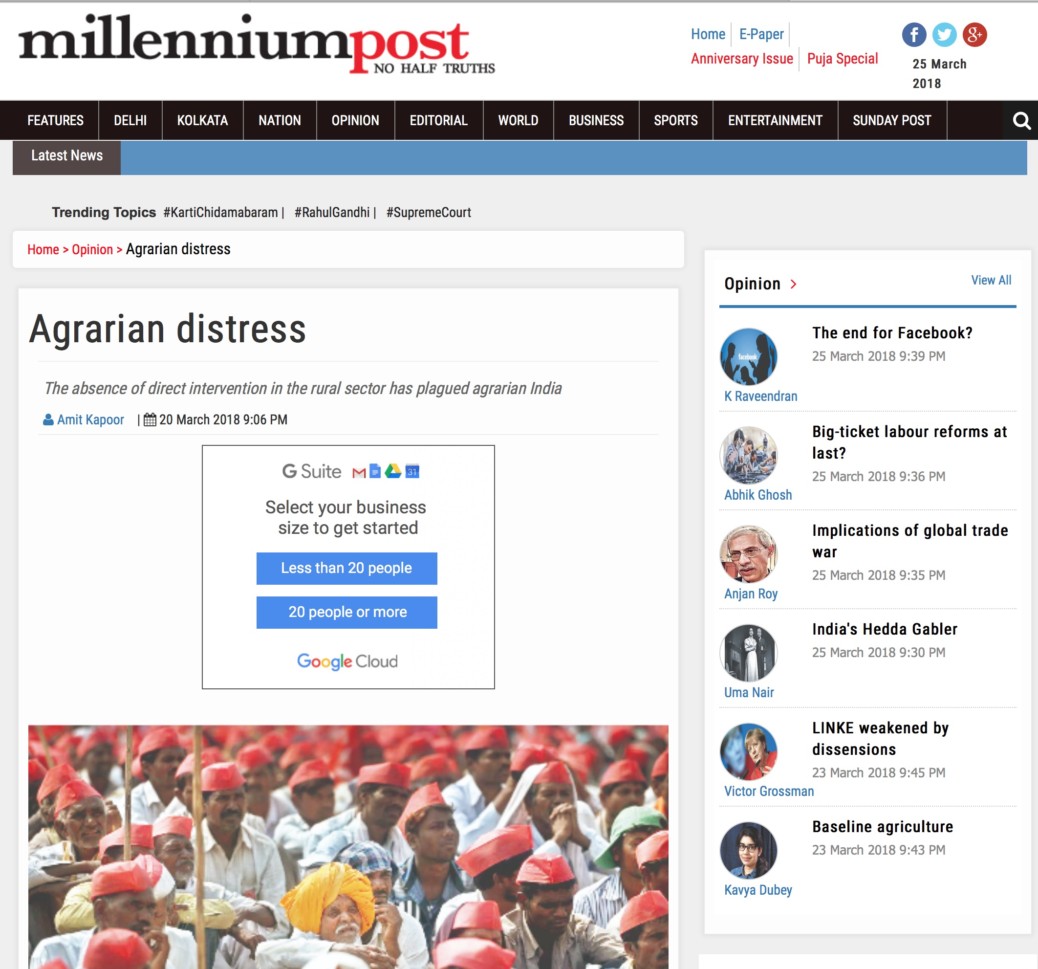 The 180 km-long march of Maharashtra’s farmers from Nashik to Mumbai that swelled to about 40,000 in number by the time it reached the state capital is a potent reminder of the burgeoning problem of agrarian distress in India. It is also indicative of how this segment of the Indian population — which comprises about 60 percent of the total — has found itself repeatedly short-changed in the country’s developmental process.

Farmers in Maharashtra have gone through a particularly bad phase, with agricultural growth turning negative in the last three of four years. A spate of droughts and pest attacks — combined with the disruptions in cash flow due to demonetisation and the cow slaughter ban — have had an inimical impact on the state’s agricultural sector.

Thus, the march centred on a few major demands: A complete farm loan waiver, the effective implementation of the Forest Rights Act, 2006, and revision of the minimum support price (MSP) as per the Swaminathan Committee recommendations. The government agreed to relax the eligibility criterion of loan waivers and address implementation issues for clearing land titles and setting the MSP.

There remain numerous fiscal and administrative difficulties in the actual fulfilment of these commitments, which themselves need to be explored in detail. However, the fact of the matter remains that these are by no means a sustainable long-term solution to the problem which arises each year across the country.

This year’s Economic Survey pointed out that the level of real agricultural GDP and real agricultural incomes has remained constant over the last four years. During the same period, the gross capital formation (or investment) in agriculture has also declined from 2.9 per cent of GDP in 2013-14 to 2.17 in 2016-17. Therefore, a more effective mechanism needs to be adopted to address these problems by increasing the productivity yield of farms and reducing their vulnerability to seasonal variability, price shocks and pests.

There is also a strong economic logic behind the need for agrarian reforms. The World Development Report of 2008 surveyed several developing countries over 25 years and found that growth in agriculture by one percent reduces poverty by two to three times more than a similar growth in non-agricultural sectors. In China’s case, it was 3.5 times more effective and for Latin American countries, it was 2.7 times more effective. Given that more than half of India is engaged in agriculture and that almost 75 per cent of poverty is concentrated in rural areas, the economic gains from reforming the sector are self-explanatory.

The Chinese experience with agrarian reforms holds a few lessons for India. Unlike India, when China enforced economic reforms, it began by focussing on the agricultural sector. The commune system was dismantled and replaced with the household responsibility system and much of the stifling price controls were removed from agricultural goods.

Following the reforms, the sector grew at over seven per cent per annum between 1978 and 1984 as compared to a paltry 2.3 per cent in the pre-reform period of 1952-77. Also, due to this growth spurt, real rural income rose at 15.5 per cent per year during the same period, bringing poverty levels down from 33 per cent in 1978 to 15 per cent in 1984. The reduction in poverty increased the purchasing power of the masses and created a demand for industrial goods that paved the way for manufacturing reforms and the eventual revolution that brought about its historic growth phase for the next three decades.

In contrast to China, Indian reforms were less strategic and more by stealth. They were undertaken to resolve an economic crisis by adjustments in trade policy and delicensing of the industrial sector. Agriculture was kept out of these reforms and only later were piecemeal attempts made by tinkering with the agricultural policy. The reforms did help in ushering in macro-economic stability within the economy and boosting the overall rate of economic growth, but it only impacted the rural masses through shaky dynamics that resembled a trickle-down approach.

Most of the benefits that accrued to the sector came primarily either through indirect reforms of the exchange rate or from the transmission of rising global prices between 2004 and 2011. As a result, India managed to halve its poverty rate in over 18 years (from 45 per cent in 1993 to 22 per cent in 2011) as compared to merely six in China.

Prime Minister Narendra Modi aimed to double the income of farmers by 2022 when he came to power, but maintenance of status quo can hardly make such goals a reality. Quite a few structural changes are necessary to ensure sustainable growth in the sector.

First, the incentive structure for the farmers needs to be corrected. There is a consumer bias in agricultural policies to provide food security and price stabilisation, which often comes at the detriment of farmers who end up bearing the brunt. Ad hoc and unpredictable export bans are a case in point. Such trade-restricting policies should be avoided to provide a similar incentive structure as provided to the industries.

Second, considering that more than half of Indian agriculture is still rain-fed, a higher proportion of investment needs to be devoted to improving the agricultural infrastructure.In the total agricultural budget for 2018-19, merely 12 per cent has been allocated for investment while the rest is meant to be utilised for subsidies and safety nets.

Finally, there is practically no attempt at research and development (R&D) in agriculture.India spends merely 0.46-0.6 per cent of its agricultural GDP on R&D of the sector against a recommended norm of at least one percent for developing countries. With such a lopsided policy intent, where is the scope of doubling farm incomes?

The article was published with Business Standard and Millennium Post on March 20, 2018.