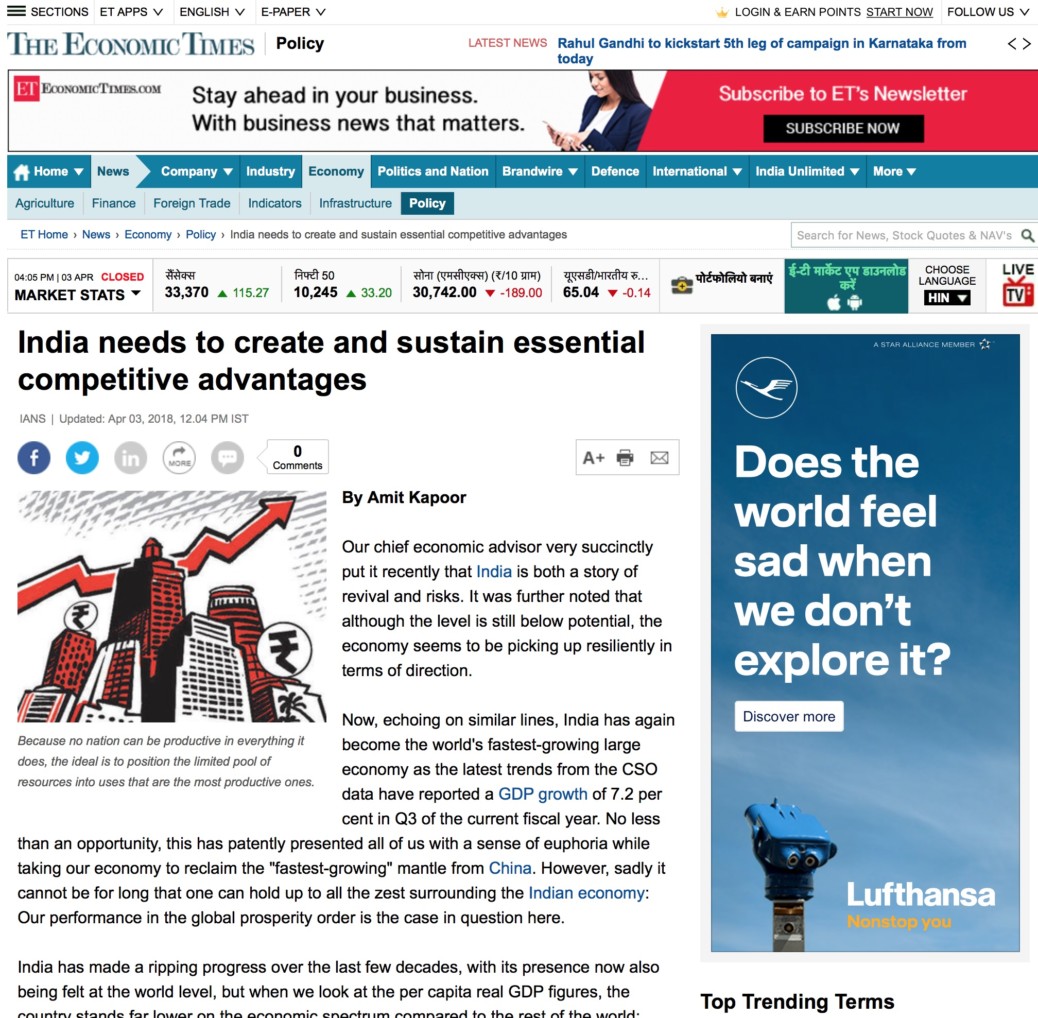 Our chief economic advisor very succinctly put it recently that India is both a story of revival and risks. It was further noted that although the level is still below potential, the economy seems to be picking up resiliently in terms of direction.

Now, echoing on similar lines, India has again become the world’s fastest-growing large economy as the latest trends from the CSO data have reported a GDP growth of 7.2 per cent in Q3 of the current fiscal year. No less than an opportunity, this has patently presented all of us with a sense of euphoria while taking our economy to reclaim the “fastest-growing” mantle from China. However, sadly it cannot be for long that one can hold up to all the zest surrounding the Indian economy: Our performance in the global prosperity order is the case in question here.

India has made a ripping progress over the last few decades, with its presence now also being felt at the world level, but when we look at the per capita real GDP figures, the country stands far lower on the economic spectrum compared to the rest of the world: $1,861.5 at 2010 prices for 2016 (World Bank data).

Keeping its economic peers in mind in going by this measure of prosperity, a quintessential question that besets us is why is India where it is today in terms of standard of living for its citizens? Is there a “magic sword” that some countries swing in their favour and maintain decent levels of living standards? Well, differences in GDP per capita across countries have abstracted much of growth and development economics amongst economists which continues even today. However, no less than a magical sword or a master key, the answer lies in looking at the competitiveness of India’s national economy.

Conventional definitions of competitiveness would normally involve discussions about the availability of cheap abundant labour and natural resources, interest rates, exchange rates, the state policies in action and the management practices adopted. But an idea which is single-handedly much more eloquent to the theme of competitiveness is productivity. In its simplest form, productivity is the value of output per unit of input used. National competitiveness, then, is defined as the productivity of the factors of production (labour, land and capital) employed during production processes.

This explanation of productivity being the most meaningful concept of competitiveness is sufficient by itself to demonstrate that there tends to be more broad and complex forces at work than ones that have been traditionally talked about.

Since it is an overriding goal for a nation to produce a high and rising standard of living for its citizens, its ability to be able to deliver on this front depends entirely on the productivity of some of the principal factors of production. Depending on the quality as well as the features of the product, productivity is concerned with the efficiency with which this product is produced.

Being the root cause of national per capita income, productivity, however, must not be mistaken with higher participation of the labour force although it is productivity which determines the rate of return that a factor can earn for itself. This is because it is possible for the overall output to rise even though the per worker per hour productivity goes down. Hence, sustained standards of living and productivity growth require that an economy continually upgrade itself.

An economy that is made up of companies and a set of industry segments must incessantly work towards improving productivity by boosting production efficiency through added quality and features. In the process that is unleashed, capabilities must be developed to compete in more advanced segments as well in entirely newer sections. Because no nation can be productive in everything it does, the ideal is to position the limited pool of resources into uses that are the most productive ones. The search then is for the unwavering quality of a country that can allow its industries and companies to create sustained competitive advantage in selected fields, not only locally but also globally.

Therefore, policymakers seeking to unravel higher levels of living standards must first fully understand the determinants of productivity and its growth. It is incontestably about how and why that underpins the process of achieving and upgrading a nation’s productivity. To find answers to some of the basic caveats, the economy then must not be studied as a whole but in terms of specific defining industries and segments where companies in the modern international competition set-up compete with global strategies involving both trade and foreign investment. This approach has the capability to provide for an understanding why a nation like India can build up a home base for its companies that compete on a global level.

The home base here which is to be built over time is nothing but the nation itself where essential competitive advantages are created and hence sustained.

The article was published with Business Standard, Economic Times and SME Times on April 3, 2018