A Coming of Old Age Story 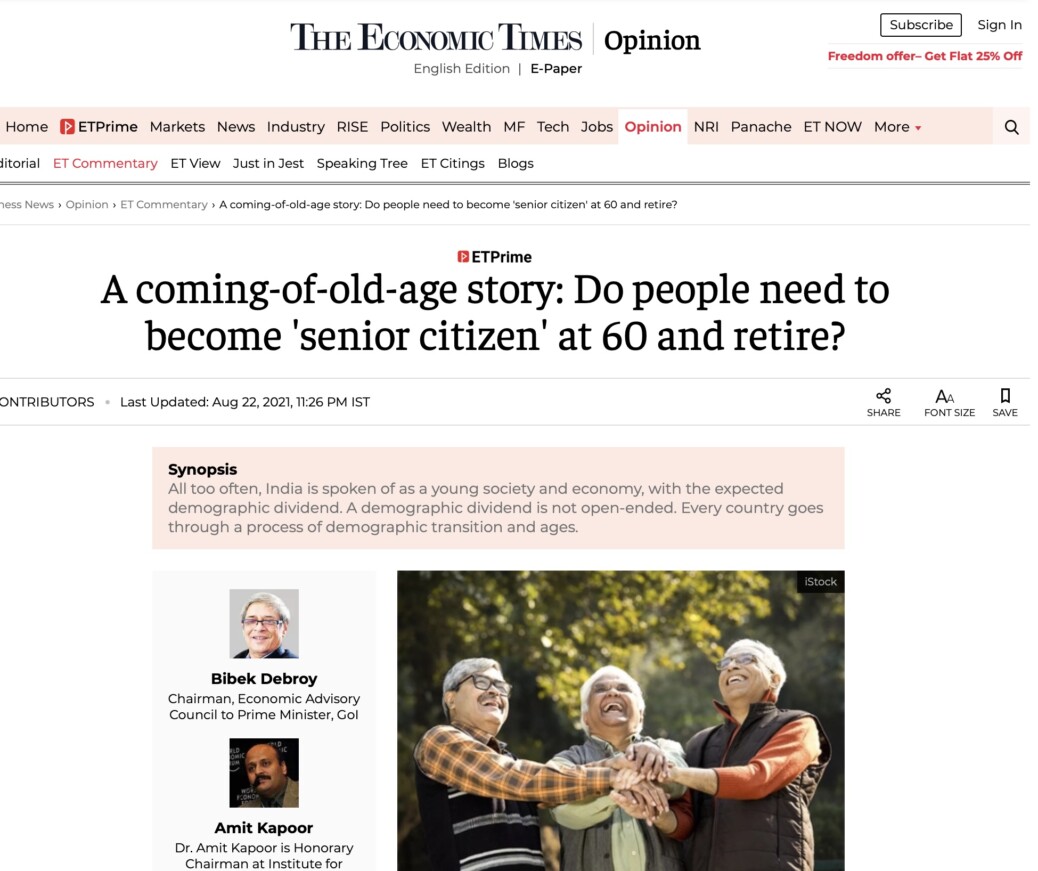 A Coming of Old Age Story

All too often, India is spoken of as a young society and economy, with the expected demographic dividend.  A demographic dividend is not open-ended.  Every country goes through a process of demographic transition and ages and greys, and sometimes, unlike in the West, these changes are compressed into a couple of generations, with medical advances increasing life expectancy dramatically.  According to Longitudinal Ageing Study in India (LASI), India will have around 320 million people who are aged 60 and more by 2050.  That’s more than three times the number we have now (104 million in Census 2011).  60 years and more makes a person a senior citizen.  80 years and more makes a person a very senior citizen.  At the time of Independence, India’s life expectancy was 27.  In 1951, with a redefined India and better data for former Princely States, it increased to 31.  If the life expectancy is 27 (or 31), one can think of vanaprastha at 50 and sannyasa at 75.  But when the life expectancy at birth is 68 years, should a person retire and become a senior citizen at the age of 60?

This is further complicated by two reasons.  First, when one uses the expression life expectancy, one means life expectancy at birth.  But the Sample Registration System (SRS) can be used to deduce life expectancies at different age-groups. For example, at the age of 70, the all-India expectation of life will be more than 11 years.  A person who has lived till the age of 70 can expect to live for at least 81 years, facing problems not very different from issues faced by the old in more advanced countries.  UN has declared 2021-2030 as the Decade of Healthy Ageing.  India is already greying and will grey even more by 2030 and beyond 2035.  Hence, while young India is important, old India can’t be ignored.  Roughly, 10% of India’s population is 60+ now (2019, not 2011 Census) and that number will approach 20% by 2050.  Second, there is considerable variation among Indian States.  At the age of 70, expectation of life is 14.3 years in J&K and 14.5 years in Uttarakhand, compared to 9.2 years in Chhattisgarh.  Life expectancy at birth is 74.9 years in Kerala, compared to 63.9 years in Assam.  Ipso facto, the age dependency ratio varies widely from State to State, with Kerala at one extreme and among major States, Andhra at the other.

This is understandable, because States are at different levels of demographic transition.  But the aging problem Kerala faces today, will be a problem Bihar will face further down the line. To illustrate with projections, life expectancy in Bihar is expected to increase from 68 years in 2011-15 to 73.7 years in 2031-36.  In Kerala, it is expected to increase from 75.17 years in 2011-15 to 77.32 years in 2031-36.  Consequently, not only do old age dependency ratios vary among States, there will be a temporal tendency to them to increase across all States.  Are we equipped to handle the problem, specifically articulated in something like SDG-3?  There is a scheme like the National Social Assistance Programme (NSAP), covering old-age pensions and food security to targeted beneficiaries.  Indeed, the National Policy on Older Persons is of 1999 vintage an there is also the 2007, Maintenance and Welfare of Parents and Senior Citizens Act.  In passing, one should mention a gender angle too, the feminization of aging.  Many more women than men are reaching older ages.

The broader eco-system transcends government policies.  How is income security ensured for the aged, through pensions or otherwise, and not merely for those who are targeted and subsidized beneficiaries?  (Pensions do not have to be invariably funded by government, not across the board.)  How are the old defined and do we have adequate data?  Do people need to become old at 60 and retire?  Is increase in retirement age and reskilling possible?  Is that definition of the old in consonance with increases in life expectancy?  Are the old, however defined, integrated into the economy?  Are there efficient health-care and other services?  Is there sufficient digital literacy among the old, irrespective of the income slice? How do old-age homes function? Some of these are meant to be rhetorical questions.  According to 75th round of NSS, only 5.3% of 60+ males can operate a computer and 5.8% can use the Internet.  Not surprisingly, the respective figures for women are 1.7% and 1.9%.  Some issues of delivery of goods and services (which needn’t always be delivered by different layers of government) are age-neutral.  That is, provision of physical and social infrastructure and financial products are inadequate and inefficient, regardless of age.  However, this does tend to hurt the aged relatively more.

Swami Vivekananda wrote something in Bengali, titled, “Swadesh mantra”.  It is fairly well-known and has been translated into English, though it sounds better in the Bengali. “India’s society is the cradle of my infancy, the pleasure-garden of my youth, the sacred heaven, the Varanasi of my old age.”  As a society, we have focused a lot on the cradle of infancy and pleasure-garden of youth.  The Varanasi of old age awaits.

The article was published with Economic Times on August 23, 2021.