View: Modi’s move to dismantle bureaucracy, the demonic relic of the Raj, deserves a standing ovation 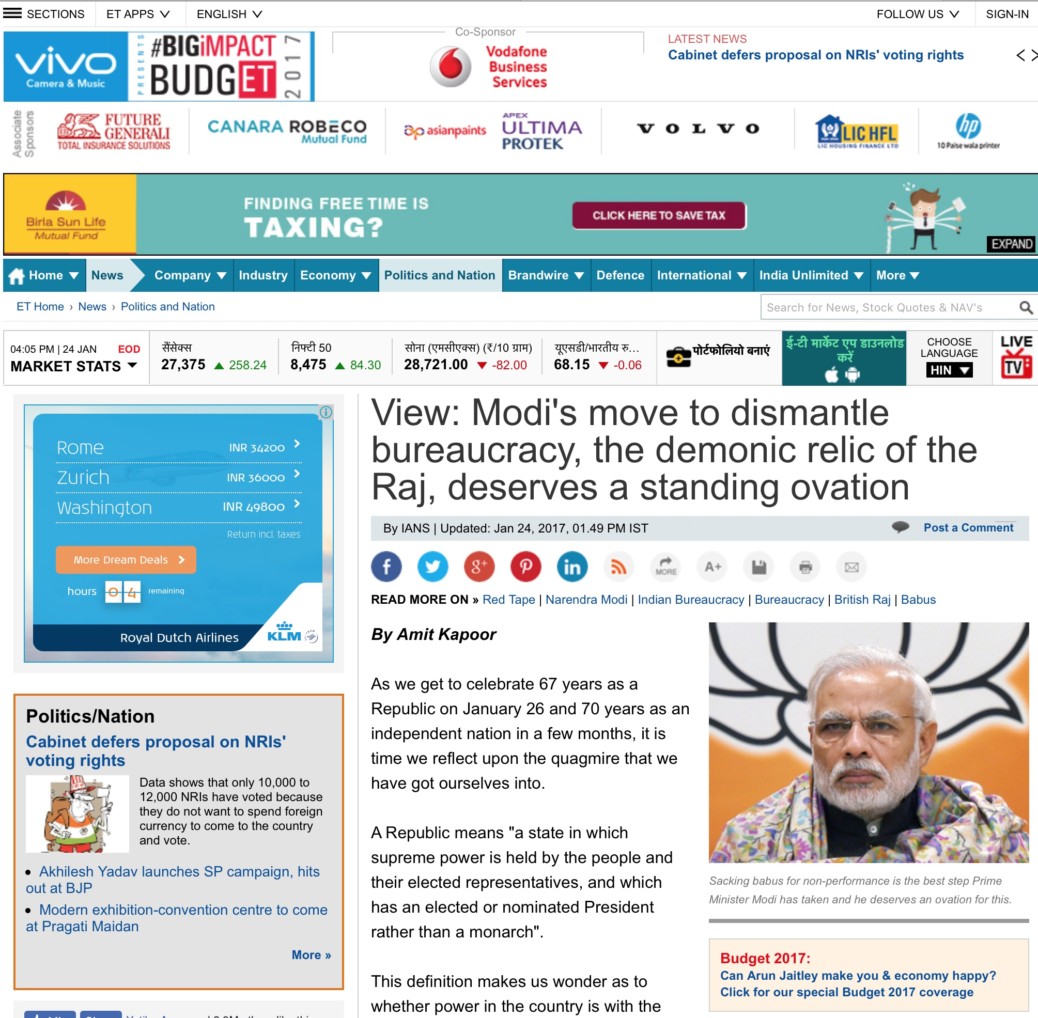 As we get to celebrate 67 years as a republic on January 26 and 70 years as an independent nation, in a few months, from the clutches of the British, it is time we reflect upon the quagmire that we have got ourselves into.

Republic as the definition stands means “a state in which supreme power is held by the people and their elected representatives, and which has an elected or nominated president rather than a monarch”.

This definition makes us think as to whether power in the country is with the people or is it a façade of power to the people. I would tilt towards a point wherein despite having elected leaders the country is under absolute control and in the clutches of the bureaucracy and bureaucratic processes. The present-day bureaucracy reflects the age-old analysis propounded by Socrates that the strong (bureaucrats) have the advantage. Herein we need to ask the question as to what is the job of a civil servant? Is it to enable or control? What I see is that process in the country have been built to perpetuate control at all levels possible, and the bureaucrats have ended up being the de facto rulers of the land. The advantage that the bureaucracy has is accentuated by information asymmetry that gets perpetuated through masquerading control via processes that slow things down and thereby enhance corruption.

Bureaucrats, as it should be, are representatives of the state and not the state in themselves. They though behave as if they are the state with arrogance and know all attitude. These are the people who I see as the biggest folly of our democracy that none of us have seen or thought of setting right. I see the Babus as the people who have been waging war against the people of this nation, by enslaving their will, destroying and stalling the pace of change & sending back the country to a perpetual abyss and realms of everlasting tyranny. We do see some examples of courage, within the bureaucracy, who try to change the system, though these are the people who are far few and subjected to peer pressure that curtails their thinking and will. This though only reflects the shrillness and silence of moral corruption.

This shows that the country is still governed with an iron fist by the last remnant of the Raj. What I see is that we entered the age of bureaucratic authority and control somewhere within two or three decades of independence. We as a nation got free from the British only to be enslaved by the brown sahibs. Gandhi once said that India would be enslaved by the brown sahib and how right he was. I am sure if he were alive today he would be very worried and very pained by the state we the people are in.

The population has been oblivious of this fact & many are sold to the story of freedom. However, the demonic process wherein we have clearly lost our idea reflects the dichotomy wherein we choose the government but having no say in choosing the governance mechanism we wish to have. Why is it that we are perpetually asked to suffer a career bureaucrat under whose fear and perpetual brutality we live under? The enslaving of the country by its people is a repulsion that cannot be explained or put across in words. The bureaucrat is a symptom of all problems that we have or face and reflects their failure to do their job sincerely. For them destroying a life or an idea is ever so easy to that they can protect their turf and playground.

By the time the realization would dawn it would be so late to seek redemption and we shall live in the throes of an ever-painful existence.

Having given this abysmal picture, I see hope in the coming years. The idea is to overhaul the system and reduce the elected leaders’ dependence on career bureaucracy. I see the beginning of the dawn of a new era wherein recently some of the bureaucrats have been sacked for nonperformance. I must though say that I am elated and delighted with this news. This is the best step Prime Minister Modi has taken and deserves an ovation for this. I do hope this is the beginning of the end of the last relic of the Raj and the incestuous structures bureaucrats have created around themselves. Prime Minister Narendra Modi is the best bet for us in the country as he has the mandate to bring changes within the country that no other democratically Government at the center has had in the last three decades. What India has required for ages, is change in Governance structure and it is for the first time we are seeing a Government taking the step dismantling the demonic relic of the Raj.

The article was published with Economic Times, Financial Express & Business Standard on January 24, 2017.