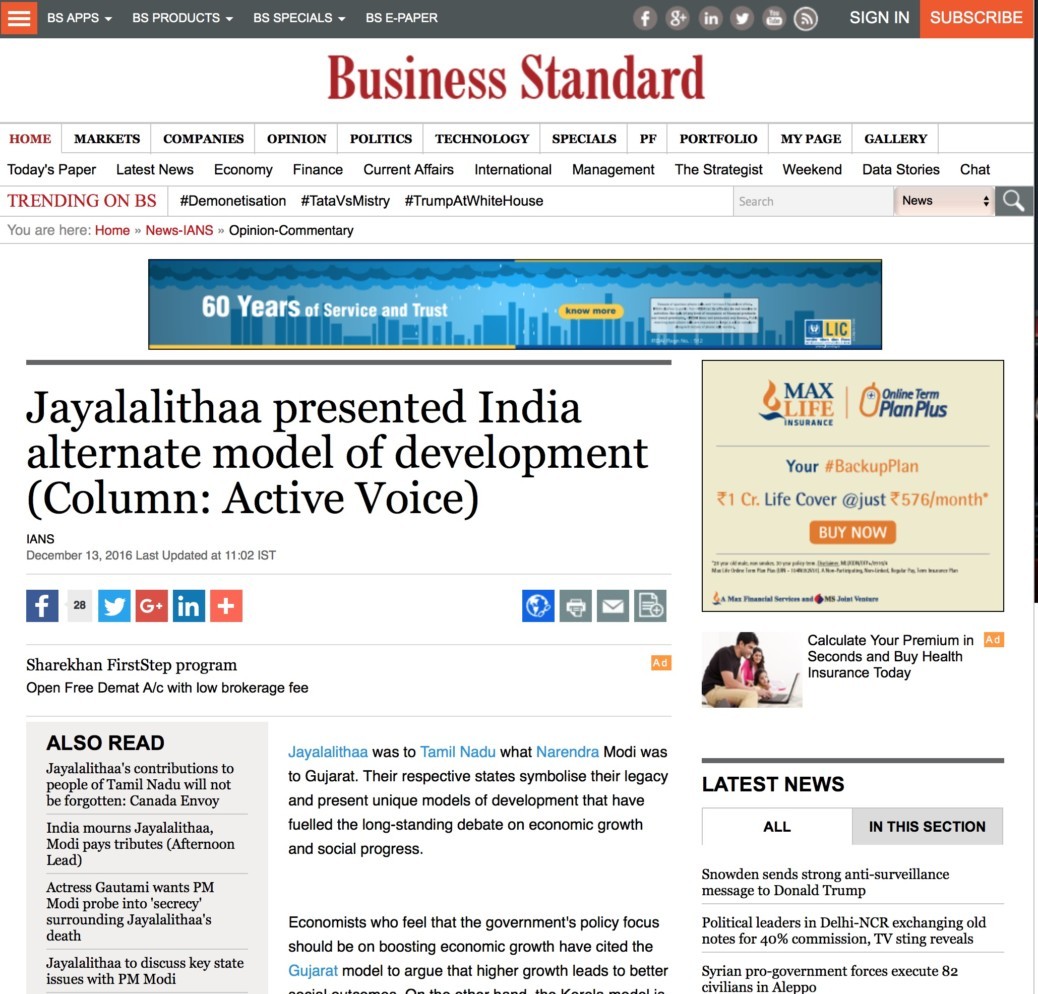 Jayalalithaa was to Tamil Nadu what Narendra Modi was to Gujarat. Their respective states symbolise their legacy and present unique models of development that have fuelled the long-standing debate on economic growth and social progress.

Economists who feel that the government’s policy focus should be on boosting economic growth have cited the Gujarat model to argue that higher growth leads to better social outcomes. On the other hand, the Kerela model is exemplified as evidence that investing more in social infrastructure can boost the productivity of people and thereby growth. However, the comparison seems unfair as Kerela has had a historical advantage over Gujarat and social indicators of the former have been better than the latter since the time of independence. Also, the Kerela model is often criticised for doing well on the social front but not on the economic side.

Tamil Nadu, however, presents a fair counter-example. Unlike Kerala, the state had no historical advantage. In fact, Gujarat was doing better in many indicators before the 1990s. They also had almost similar Gross State Domestic Product (GSDP) at the time. Moreover, both states have almost similar geographical area, population size and access to the sea. They are as similar as two different states can be and thus, all differences can be safely attributed to public policy.

Since the early 1990s, when India undertook economic liberalisation and Jayalalithaa first came to power in Tamil Nadu, both states have maintained consistently high economic growth rates. The average growth rate in the two decades following liberalisation was 7 per cent per annum for Tamil Nadu and 8.3 per cent for Gujarat. Even though Gujarat has grown slightly faster, the gap between the two has been consistently growing narrow.

Inequality has almost remained the same in Tamil Nadu while it has gone up in Gujarat. Life expectancy is better in the former as well.

Apart from Gujarat, the state has outperformed the average Indian trend in numerous social and economic indicators, an analysis by Institute for Competitiveness has found. Infant mortality in Tamil Nadu is the second lowest in the country, and fertility rates are the lowest. Similarly, crime rates against women and children are among India’s lowest. On the economic front, it has the highest per capita income among India’s large states and also more factories than any other state in the country.

The reason behind Tamil Nadu’s stellar performance has been the state’s public services, most of which are universal in nature and among the best in the country.

On the healthcare front, the state has a clear commitment to free and universal healthcare covering a wide range of facilities and services. The state has also set up a computerised supply chain to ensure timely supply of free medicines in all government-run clinics.

Tamil Nadu was also the first state to introduce free and universal midday meals in primary schools, which became a model scheme for the entire country. The state’s PDS system, with timely distribution and lower corruption, also became a model for the country while significantly impacting rural poverty in the state. The universalism of all public amenities and schemes has played a significant role in reducing leakages and enhancing impact. As a result, very few have been deprived of the basic amenities of life in the state.

The political focus on healthcare and education in Tamil Nadu is also evident from the state’s per capita expenditure in these areas, which is one of the highest in the country. It is also interesting to note that these issues feature in election campaigns in the state, in contrast with the rest of the country.

It is evident that Jayalalithaa is not solely responsible for all the reasons that Tamil Nadu is performing well. The positive social and economic outcomes of the state have to be attributed to an organised political pressure that arises within a healthy democracy. Nevertheless, her initiatives like Amma canteens that significantly addressed issues of food insecurity require exceptional political will.

Jayalalithaa managed to carve out a model of development that inculcated the best of both the Gujarat and Kerala models. Issues of corruption might still be pending against her at the Supreme Court, but the good in her political career needs to be recognised and presented as an alternate model of development for the country as a whole. The Tamil Nadu model shows that a middle ground between the Gujarat and Kerala models can be a better pathway to development.

Published in Business Standard on December 13, 2016. To know more