Sabka Prayas: How the citizens can do their bit

Home Sabka Prayas: How the citizens can do their bit 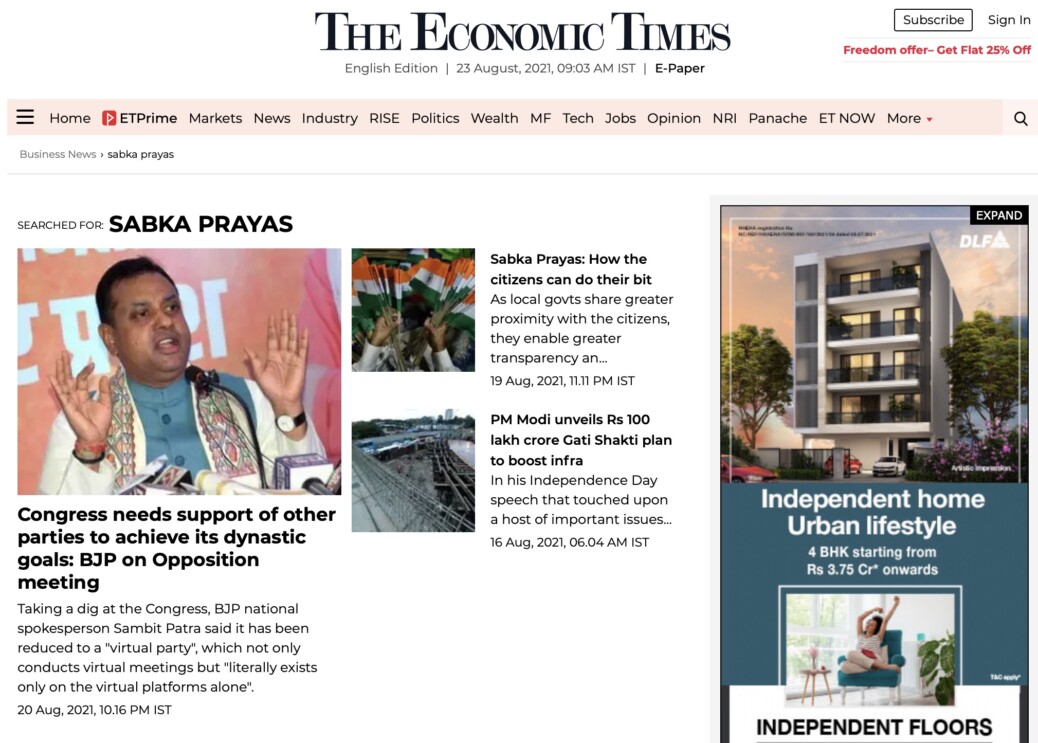 Sabka Prayas: How the citizens can do their bit

As India entered her 75th year of independence, the Honourable Prime Minister called on the nation to come together to build a new India. Expanding the motto of ‘Sabka Saath, Sabka Vikas, Sabka Vishwas’ to now include ‘Sabka Prayas’, he highlighted that everyone’s effort was necessary to take India to new heights. The addition of these two words holds immense importance. It calls on us to deliberate on the notion of governance, of democracy and the role of common man.

To reach a clearer understanding of ‘Sabka Prayas’, we must begin with discussing the idea of governance. Decades after independence, the State-citizen relationship is still viewed from the colonial lens, wherein the citizenry is dependent on the government for providing almost everything, while remaining as passive subjects. But a defining characteristic of democracy is that the citizens and the State are equal partners, wherein an individual holds certain entitlements that the State is expected to deliver on, while it is the citizens’ task to ensure that the State does so. This is a key aspect of governance.

Governance is a much broader concept than government. Besides government, governance also comprises the formal and informal institutions, public, civil society and the markets. The exercise of power by each entity then drives decision-making, and the role played by each contributes to the policy decisions. Hence, the people are an integral part of governance, and they can enable good governance when they exercise their democratic rights beyond the electoral rights to also actively engage and cooperate with the government.

One can say that good governance is intertwined with the functioning of democracy. Democracy, in turn, is not only something that can be achieved just once, but it has to be practiced every day. Although having a democratic system is an end in itself, it is also an instrument of development. Policy agenda is influenced by public sentiment, and if people themselves do not raise their voices for their own rights and entitlements as well as that of their fellow countrymen, the democratic system would not guarantee the provision of the same to them. In this sense, the idea of democracy has to be more deliberative and participative.

The question is, how can citizens actively participate in governance? The answer lies in the third tier of government. The 73rd Constitutional Amendment Act and 74th Constitutional Amendment Act have established local self-governance institutions at the rural and urban level, respectively. The idea was to decentralise governance, so that the provision of entitlements was not only contingent on the central or state governments but also on the local governing bodies.

As local governments share greater proximity with the citizens, they enable greater transparency and accountability. Thus, they not only act as a bridge between the people and the other two tiers of government, but also are also a means for citizens to take an active role in decision-making and exercise their power as stakeholders in the governance chain, thereby promoting participatory democracy. In short, the decentralisation of power down to the local level facilitates good governance through the exercise of democracy.

Hence, the nation, as a whole, should envisage collective effort at the local level of governance in order to move the needle on development. But the exercise of rights also comes with certain duties. As John Rawls’ doctrine of public reason states, “Citizens engaged in certain political activities have a duty of civility to be able to justify their decisions on fundamental political issues by reference only to public values and public standards.” By virtue of holding the right to participate in governance, the citizens also have a duty to ensure that their political decisions are acceptable to fellow citizens, that they are able to justify their political decisions on the most fundamental political issues to one another using publicly available values and standards.

In the modern context, the doctrine of public reason requires that citizens concur on basic issues like human rights, inequality, corruption, provision of health and education, and so on. It ties back to the idea of Sabka Vikas or inclusive development. Sabka Prayas would lack in spirit if Sabka Vikas is not the end in sight. Inclusive development is particularly a necessary vision that needs to be seen in conjunction with collective effort for the following reason. Citizens need adequate political power to actively participate in governance, and those who hold that political power and only use it to serve their ends, lead the society to break into two groups- the haves and have-nots. The underprivileged lack enough political power to engage in governance and thus, their needs remain unfulfilled unless their fellow countrymen help them overcome their disadvantages. Collective effort implies that those who hold enough political power utilise it to empower the ones who lack it.

In India, disadvantages stem from various sides- economic class, caste, gender, region, language, etc. Therefore, when citizens exercise their role in governance, they have a duty to ensure that the needs of the underprivileged or minority groups are also taken into account. For example, in the provision of public education, the spirit of collective responsibility must drive them to demand that all deprived sections of the society are able to access it too.

Government on its part, need to empower citizens to help them become more active participants in democracy. In the current scenario, the hurdles to citizen participation need to be eliminated at two levels. Firstly, as previously discussed, certain sections of the society remain out of political participation due to their socio-economic location. To remedy this, the government’s role is to expand the provision of social goods that allow an individual to become capable of living a good life, and have the freedom to make informed decisions about their life. This freedom would then also extend to their political participation and engagement in governance.

Another hurdle to citizen participation lies in the devolution of power to local governing bodies. The existing research on decentralisation in India largely concur that urban local governments do not have enough autonomy to effectively realise the idea of decentralisation. The Constitution identifies 18 broad functions for the urban local bodies but the devolution of these functions is left to the decision of the state government. Secondly, the capacity to deliver on those functions is also restricted as taxes form a major part of their revenues and the state governments hold the power to assign revenues from specific taxes to urban local governments. Thus, to realise effective citizen participation, reforms are needed that empower local governments.

India boasts of a robust 75-year legacy of democracy, but at this moment in our journey, we cannot remain complacent and remain as passive voters. We need to take a step beyond and become equal partners in India’s growth story. Without Sabka Prayas, India cannot overcome its developmental challenges – which have only mounted in the wake of the Covid-19 pandemic – and stay consistent on the path of ‘Amrit Kaal’ or auspicious time.

The article was published with Economic Times on August 20, 2021.