World markets ripe for the taking, but where is India’s strategy?

Home World markets ripe for the taking, but where is India’s strategy? 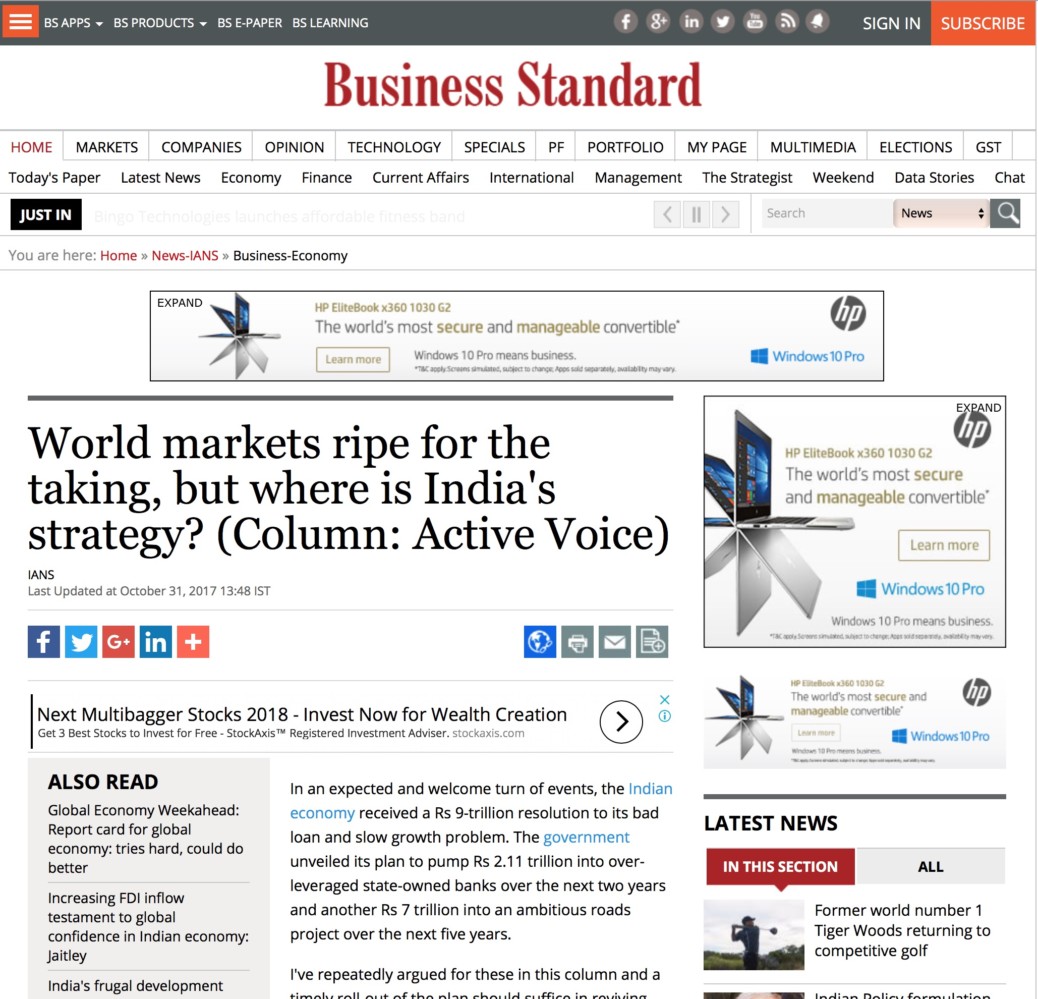 World markets ripe for the taking, but where is India’s strategy?

In an expected and welcome turn of events, the Indian economy received a Rs 9-trillion resolution to its bad loan and slow growth problem. The government unveiled its plan to pump Rs 2.11 trillion into over-leveraged state-owned banks over the next two years and another Rs 7 trillion into an ambitious roads project over the next five years.

I’ve repeatedly argued for these in this column and a timely roll-out of the plan should suffice in reviving the dampened animal spirits within the economy. However, now that issues on the domestic front have been tackled headfirst to the best of the government’s fiscal capabilities, the external sector should be explored for lucrative economic possibilities.

Fortunately for India, the global economies are showing signs of recovery for the first time after the financial crisis of 2008, rendering the world markets ripe for the taking. The IMF resonated this in its latest World Economic Outlook by raising the global growth forecast for 2017 to 3.6 per cent. This came due to growth improvements in countries like China, Russia and emerging Europe while India was awarded a downward revision in its growth.

Most importantly, India’s major trading partners like the US (2.2 per cent), China (6.8 per cent), Hong Kong (3.8 per cent) and Singapore (2.5 per cent) are showing better than expected growth rates. Under these circumstances, India could easily leverage the external upswing to boost its growth momentum.

Moreover, the external sector has already been showing some positive signs of late, with exports shooting up to $28.61 billion in the second quarter of this year as compared to $22.8 billion in the same period a year ago. As a result, the trade deficit has reduced from $9.07 billion in FY16 to $8.98 billion in FY17.

In fact, India’s exports have been falling since 2014 and have only seen a recent recovery. It may come as a surprise to many that India’s export performance had been deteriorating earlier because of dampened oil prices. Petroleum products constitute 25 per cent of the country’s export basket, making them a leading determinant of the export sector’s performance each year.

This raises a number of issues. A popularly accepted theory of trade dictates that a nation will specialise in goods that require resources that are plentiful in the economy. India is not an oil-rich nation by any means. It is a labour-rich country and even oil refining is a capital-intensive process. So, the dominance of refined petroleum products in its export list is inexplicable. This is clearly indicative of the fact that India is missing out on potentially lucrative export markets where it can be globally competitive.

Moreover, oil is also India’s leading import item. Even though the value of oil imports are almost three times that of the country’s oil exports, any change in global oil prices has to have an adverse impact on the external sector. Thus, even when oil prices dip, and India’s import bill does fall giving the government a fiscal bonanza, it negatively impacts exports and dampens the gains.

Another reason for India’s poor show in exports over the last few years was a sharp fall in discretionary spending among consumers as a result of subdued demand since the financial crisis. Consequently, India’s other leading items of export like diamonds and jewellery witnessed a sharp downturn. Now, as the global economy recovers both demand for petroleum products and discretionary products will see an uptick. But the fact of the matter remains that these should not be the products defining India’s export performance.

As mentioned, India is a labour-rich nation and is currently in desperate search for avenues to find employment for its workforce, which is expanding at an annual rate of over 11 million. Nudging the export sector to compete in manufactured goods should be a beneficial strategy in this case.

As China gradually vacates its position of being the world leader in low-cost manufacturing and graduates into higher value-added products, India should not miss out on the opportunity to become the next manufacturing destination. It has already lost considerable ground to Bangladesh in textiles and Vietnam in electronics.

It also recommends the creation of a supportive infrastructure for exports, including more laboratories for testing and more tool rooms and plant quarantine facilities, among others.

However, these are merely supply-side issues which are important in themselves but do not have much impact in altering India’s export composition. To strengthen manufacturing competitiveness in India, there is a dire need of bold structural changes in the economy like labour reforms, for which I have argued at length in this column quite recently.

Another bold reform can be inspired from the early years of Chinese growth with the encouragement of entrepreneurship at the village-level.

There remain multiple avenues for India to adopt a trade-focused, pragmatic approach which can ensure long-term gains for the country’s trade competitiveness. If the government falters at this juncture, India could very well miss an inflexion point in the country’s export history.

The article was published with Business Standard and Millennium Post on October 31, 2017.