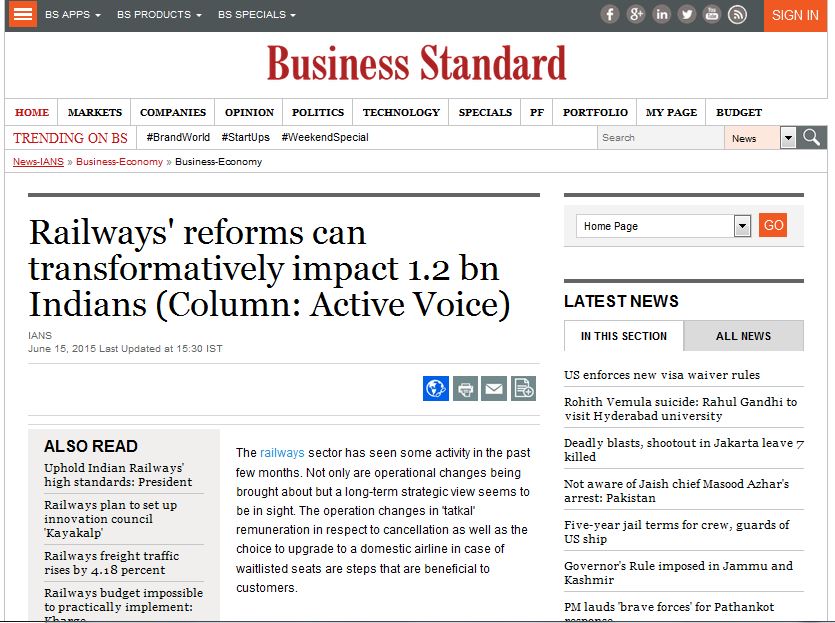 The railways sector has seen some activity in the past few months. Not only are operational changes being brought about but a long-term strategic view seems to be in sight. The operation changes in ‘tatkal’ remuneration in respect to cancellation as well as the choice to upgrade to a domestic airline in case of waitlisted seats are steps that are beneficial to customers.

The long-term view seems to come from the recently constituted seven-member committee under the chairmanship of economist Bibek Debroy on Mobilizing Resources for Projects and Restructuring of Indian Railways. The report proposes five fundamental points for the IR, specifically and the railways sector to look into:

First, what is the core role of the IR in India? This question is pertinent to understanding the core activities and the peripheral ones and separating the commercial from the social role of the IR. At present, there are a lot of activities that take up considerable time and effort on the part of IR. These include the medical service that IR runs with an infrastructure of 125 hospitals, 586 health units and 14,000 beds. Also, pertinent in this regard is the 1 degree college and 168 schools that IR runs. These along with the railway protection, catering, real estate development, housing and the like, according to the committee, are non-core activities that can be clearly outsourced.

Second the report calls for proper accounting procedures and commercial considerations in IR. A formally reformed accounting system will enable the Ministry of Railways that has administrative control over 6 established production units and 16 public sector undertakings (PSUs) to keep proper accounts. Similarly, it will also enable the understanding the level of subsidization in the 17 zones and 68 divisions into which the IR at present is bifurcated. A case in point that finds mention is the Kolkata Metro rail. Any future suburban systems according to the committee should be built on a JV route with state governments (on a 50:50 basis), and the cost should not be borne by IR.

Third, the report recommends streamlining the HR procedures and processes in IR. It is fundamental to carrying out the organizational transformation. It is primarily to be achieved by merging and consolidating the eight Group ‘A’ services into two services. These could be respectively called the Indian Railway Technical Service (IRTechS) comprising of the existing five technical services (IRSE, IRSSE, IRSEE, IRSME and IRSS) and the Indian Railway Logistics Service (IRLogS), comprising the three non-technical services (IRAS, IRPS and IRTS). Aligned with the streamlining of HR procedures is the decentralization of the authority and responsibility to at least the level of Divisional Railway Manager (DRM). The DRM is in charge of one of the 68 divisions of the IR. The financial authority, as well as the power in handling tenders connected with works, stores procurement, to DRM’s, ensures that departmentalism is reduced – and there is accountability within the IR.

Fourth, is the issue of ensuring competition and liberalization in the railways sector. The committee has for specific reasons refrained from calling the liberalization of the railways sector as privatization or deregulation. Essentially the committee recommends and encourages open access to private players who want to operate trains on tracks. It is in line with what is practiced at present in some parts of Europe and Australia. Liberalization and open access also call for an independent regulator for the sector and the committee report recommends setting up the same statutorily with an independent budget. The regulator – Railway Regulatory Authority of India (RRAI) – for economic regulation, including, wherever necessary, tariff regulation.

The recommendations of the report are timely and present a systematic roadmap to restructure the IR behemoth in specific and the railways sector in general. However, as with the previous committee reports much will depend upon the acceptance of the report and ultimately its implementation on the ground. One will have to wait and watch as to how the strategic restructuring in this critical sector unfolds over the next decade. It truly has the capability to have a transformative impact on the lives of India’s 1.2 Billion people.

Published in Business Standard on June 15, 2015. To know more