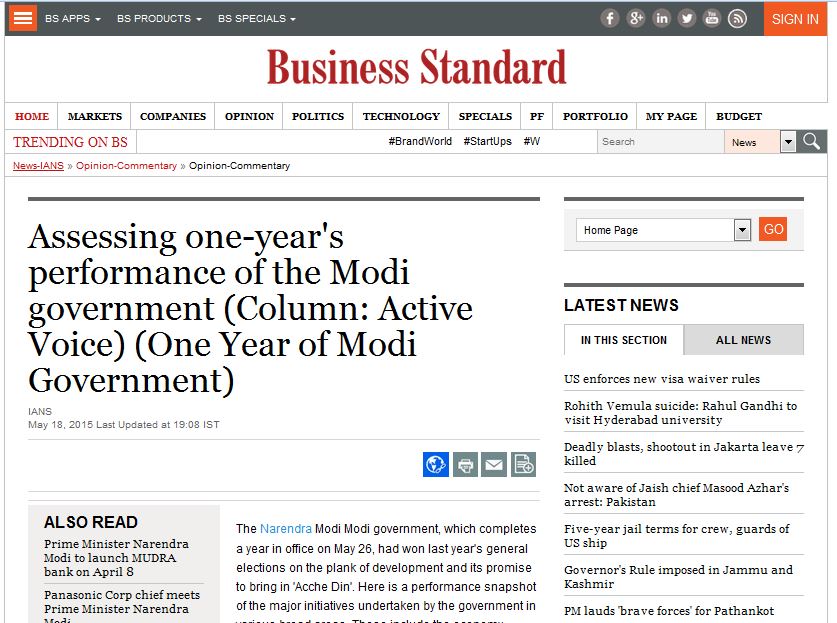 The Narendra Modi Modi government, which completes a year in office on May 26, had won last year’s general elections on the plank of development and its promise to bring in ‘Acche Din’. Here is a performance snapshot of the major initiatives undertaken by the government in various broad areas. These include the economy, foreign engagement, agriculture, infrastructural development, social security schemes, urban development, industrial development, health and environment, education and entrepreneurship and employment.

Let’s first turn to the economy. The economy observed three broad level trends. First, there was the global fall in commodity prices that lead to a gain for oil importing countries as their import costs suddenly reduced from approximately $120 a barrel to $60 a barrel. Second, was the government’s acceptance of the Fourteenth Finance Commission’s recommendations in the context of devolving more funds to the states. The figure now stands at 42 percent of the total revenue collection, up from the earlier 32 percent. Third, was the revived economic growth forecasts lead by IMF, which in its April 2015 report, revised its forecasts for India to 7.5 percent ahead of any other major developing economy, including China. The ADB similarly pointed to a bettering economy with core inflation down to 5 percent. With an overall bettering situation, the economy scores 7.5 out of 10.

Let’s now turn to the area where there was much ‘sound and fury’ – namely foreign engagement and defence. But unlike the phrase, it did signify India’s increasing global stature and aspirations. It included, among other things, trips by many domestic/foreign dignitaries to and from India. The resolve to talk and negotiate contentious border issues was also observed. The passing of the Bangladesh Land Accord Bill was a historic step aimed at transferring enclaves with a clear demarcation of territory. In the defence sphere, there was the decision to acquire 36 Rafale fighter jets that was again an imperative since the squadron strength of Indian Air Force is already down to 35 against a sanctioned strength of 42. Adding two more squadrons will help India protect, to some extent, its skies. Overall a score of 8.5 out of 10 foreign engagement and 7.5 out of 10 on defence.

The agricultural sphere witnessed erratic weather and the lack of urea availability made the overall condition bad. Added to this was the land acquisition bill that made matters worse for the government as well as the farmers. The land bill will help the farmers with alternative sources of income and provide employment to the youth. The government’s focus seems to be on irrigation schemes and helping farmers in distress. But much more could have been done and communicated appropriately. An overall score of 6.5 on 10.

The industrial, FDI and power sectors saw varying degrees of success, the most successful being the power sector with an increase in coal production as well as an increase in power capacity and generation. The FDI inflows also saw a spurt in the equity inflows as well as the fact that defence and insurance have been opened up to 49 percent foreign participation bodes well for the economy. The industrial sector was a bit subdued in spite of the Make in India programme. Some more steps need to be taken for Make in India to be successful. Overall a score of 6.5/10 for industries and a score of 8/10 for power.

The education sector saw many schemes being launched like the GIS mapping of schools, the Swachh Vidyalaya Abhiyan and the like. However, the historical legacy of the education system fails to let go. Therefore, parents prefer private schooling to government schools. Also, with respect to higher education, mere opening of institutions will not serve the purpose. Quality and quantity should be the twin pursuits. An overall score of 6.5 out of 10.

The social schemes have been very impressive and in the reach of the common man. The Jan Dhan Yojana, Pradhan Mantri Jivan Jyoti Bima Yojana (PMJJBY) Pradhan Mantri Suraksha Bima Yojana (PMSBY) and Atal Pension Yojana schemes together have close to 19 crore takers. The government seems to have a social focus on benefitting the poor. An overall score of 8 on 10.

In the context of urbanization, the 100 Smart Cities project has not seen that much activity, barring the launch of GIFT city and the development of DMIDC cities. An overall score of 6.5 on 10. Health is an area where the government has not been able to do much, apart from increasing the prices of cigarettes. The state of rural health delivery remains decrepit. Pollution of air, water and land, as also the rise in noise levels, has ensured that people continue to face serious health issues. An overall score of 6 on 10.

The government’s plans, policies and functioning seem to be in line with the country’s overall growth and trajectory. With respect to the challenges, the government seems to be prepared with adequate steps. In the coming years, most of the things will depend on the pace of decision-making and speed of implementation.

Published in Business Standard on May 18, 2015. To know more