US election, another spectacle of polarized democracy 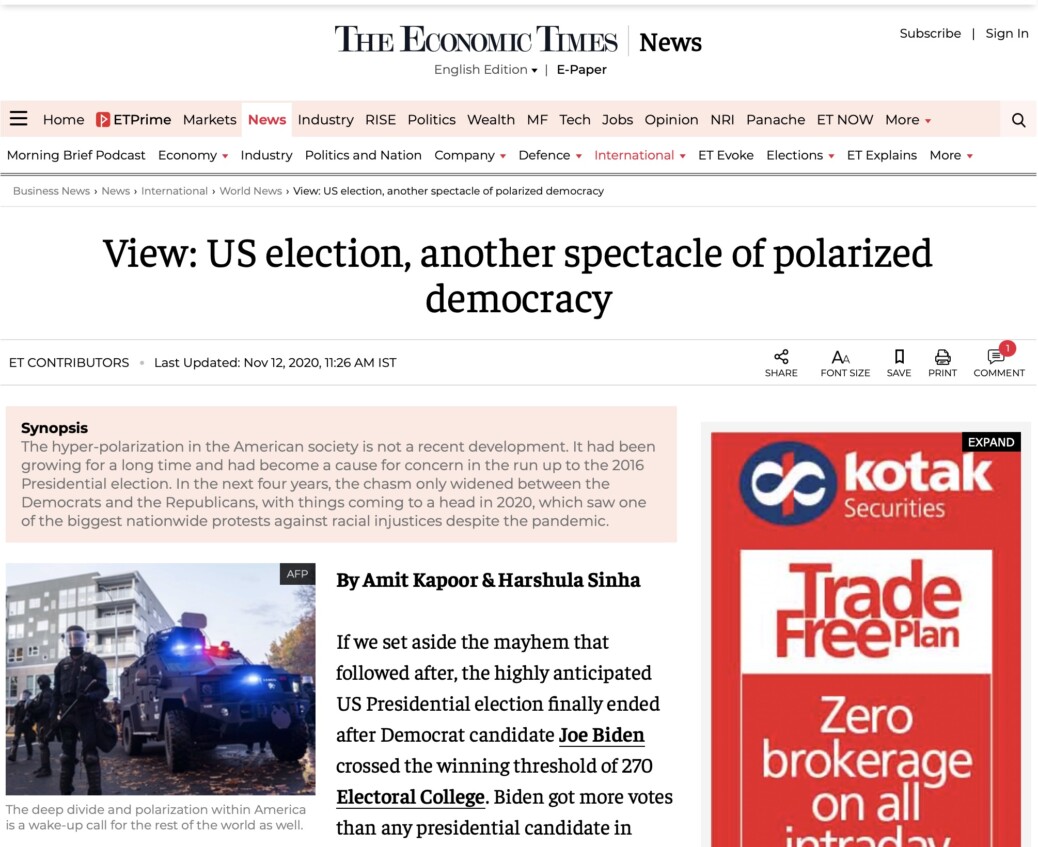 US election, another spectacle of polarized democracy

If we set aside the mayhem that followed after, the highly anticipated US Presidential election finally ended after Democrat candidate Joe Biden crossed the winning threshold of 270 Electoral College. Biden got more votes than any presidential candidate in history. After the four years of Donald Trump that included the U.S. pulling out of the Paris Climate Agreement, sexual misconduct allegations against the President, anti-immigration and anti-Muslim policies, impeachment of the President, and over 240,000 deaths during this pandemic, one would have expected a landslide Democrat win. The race was but a close one whose fate hung on the swing states. The popular vote count reveals that 47.5% of Americans were willing to give Trump another chance, thus also revealing that America is deeply divided.

The hyper-polarization in the American society is not a recent development. It had been growing for a long time and had become a cause for concern in the run up to the 2016 Presidential election. In the next four years, the chasm only widened between the Democrats and the Republicans, with things coming to a head in 2020, which saw one of the biggest nationwide protests against racial injustices despite the pandemic. The protests as well as the pandemic showed that the people of America were not so “united”.

Another report named ‘Political sectarianism in America’ published in the Science Magazine suggests that partisans have not grown any more supportive or loyal to their own party, but their hatred for the other camp has increased. It is safe to say that Democrats and Republicans don’t see the other as opponents but enemies.

The increasingly negative opinions harboured by all for the opposing side has created a wall of mistrust between the Americans. It doesn’t help that their social identities overlap with their partisan identity. As per several surveys and research, Republicans are rather a homogenous group of White Christians, whereas non-White and non-Christians choose the Democratic party. Experts concur that it is a significant factor behind the wall of mistrust that exists between the two sides. When we surround ourselves with people who share the same opinions, the contrary opinions become even more alien to us. Having this coupled with the differencing social identities, the two camps have grown even more alien to each. They do not see themselves in the people who belong to the opposing party. The result is that partisans dehumanize their political opponents.

When we cannot see our opponents as humans, the animosity extends beyond politics. Opinion on immigration, healthcare, abortion, same-sex marriage, government spending, and gun control are not just opinions determinants of one’s value system. It further determines people’s relationships with one another. An American citizen is therefore willing to break relations with someone who does not share the same political opinions. Politics is indeed personal, now more than ever.

It is partly a result of Republican policies that drove up the stakes for each camp. For instance, Trump’s anti-immigration policies left many American immigrants’ future up in the air, and so one’s opinions on the matter could not be seen as just political opinions but opinions on one’s life. It could not be more evident than during the pandemic, when Americans’ opinions on the validity of the Coronavirus and wearing of masks were also divided on partisan lines. Preventing the spread of the pandemic was a test to every country’s sense of community, which required complying with social distancing norms to not only protect oneself but also other members of the community who could be more sensitive to the effects of COVID-19. The disagreement between Democrats and Republicans, and many Republicans’ refusal to take any precautions posed a threat to people’s lives, which drove another wedge between the two camps and increased the personal antipathy between the two.

This reveals that people also use partisan cues to determine their stance on a wide array of subjects, rather than taking the pains of getting down to the nitty-gritties of a subject matter and doing their own research. This is further reinforced by the echo chambers of partisan media and social media, which prevents people from confronting with views that contradict theirs. The result is binary thinking that leaves no common ground for dialogue and discussion. Evidently, the US found to have the highest rate of polarization among nine Western democracies in a study conducted by the National Bureau of Economic Research this year.

The deep divide and polarization within America is a wake-up call for the rest of the world as well. It is a reminder for every democracy that one’s partisan identity should not hold stronger than their national identity. A unified national identity is the glue that holds together a democracy, especially one as diverse as the United States. Secondly, America is an example of how zero-sum thinking can fracture the society, and a race to the bottom can only be won by losing the national unity. Politics should not be a zero-sum game, but instead be a space for dialogue, contestation, and compromise, so that common ground can be achieved.

If President-elect Biden’s call to “put away the harsh rhetoric, to lower the temperature, to see each other again, to listen to each other again, to make progress,” and to stop treating each other as enemies is any indication, America may still have hopes to heal from this hyper-polarization. However, a moderate Democrat for President may not be enough to stitch back the country unless the Americans themselves are willing to do so.

The article was published with Economic Times on November 12, 2020.