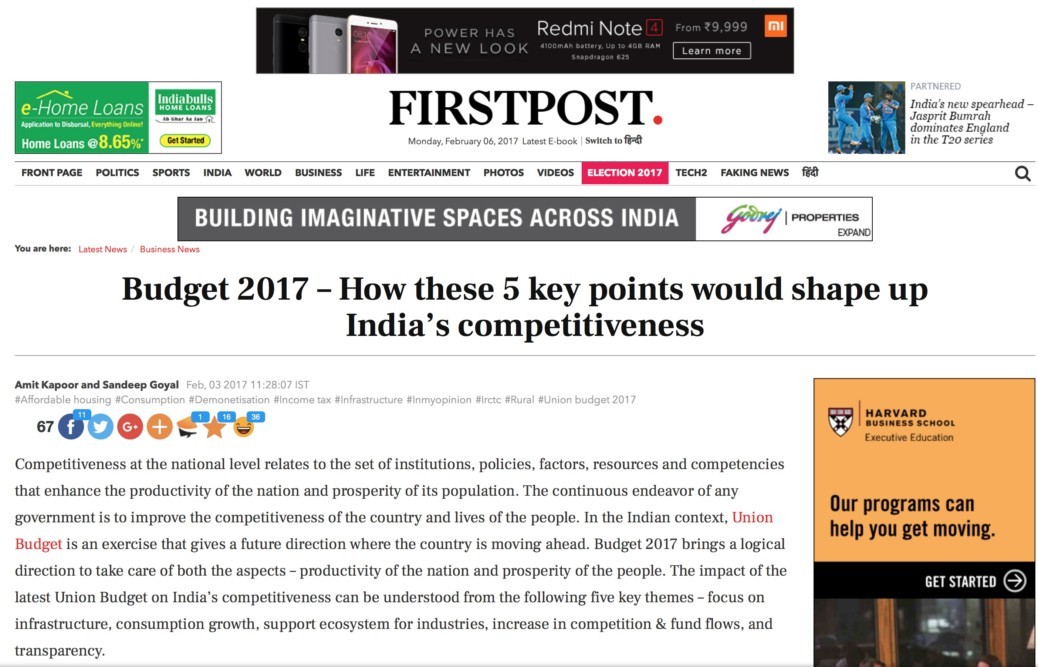 Competitiveness at the national level relates to the set of institutions, policies, factors, resources and competencies that enhance the productivity of the nation and prosperity of its population. The continuous endeavor of any government is to improve the competitiveness of the country and lives of the people. In the Indian context, Union Budget is an exercise that gives a future direction where the country is moving ahead. Budget 2017 brings a logical direction to take care of both the aspects – productivity of the nation and prosperity of the people. The impact of the latest Union Budget on India’s competitiveness can be understood from the following five key themes – focus on infrastructure, consumption growth, support ecosystem for industries, increase in competition & fund flows, and transparency.

One, the integration of railway budget with union budget is a big step towards harmonising the rail network with roads, air, and water transport. This is a significant shift towards creating an ecosystem having an end-to-end connectivity. Second, the budget has announced setting up the mini labs in Krishi Vigyan Kendras and increasing the irrigation corpus to Rs 40,000 crore thereby pushing further the access to irrigation and understanding of soil and crop patterns. This step will enhance the productivity levels of the crops as well as income levels of the farmers. Third, the enhanced budget outlay on Bharat Net project will act as a stimulus for rural connectivity, which is necessary for last mile channels for value creation and delivery. However, one point, which seems to lack attention here is regarding the underlying complexity in laying out the fibre-optics network. There is a need to explore the alternative technologies, which can lead to faster execution and have ease of maintenance.

Other steps like 100 percent electrification, increase in sanitation coverage and access to piped drinking water, etc. are seen as catalysts in enhancing the prosperity due to increased working hours, reduction in healthcare costs and better lifestyle. The continuing focus on core infrastructure in the current budget is bound to have a multiplier impact on enhancing the productivity of India and prosperity of the people, especially the underserved rural masses.

Another key aspect of enhancing the competitiveness of the country involves providing a stimulus to the local customers and needs. Budget 2017 highlights three main steps to influence the consumption patterns. The first step involves increasing the disposable income of the individuals by reducing the tax rate from 10 percent to 5 percent for the income slab of Rs 2.5 lakh to Rs 5 lakh. According to the budget discussion, 1.9 crore Indians declared their annual income between Rs 2.5 lakh to Rs 5 lakh. The decrease in income tax from 10 percent to 5 percent leads to an annual tax savings of Rs 12,500 per person. For 1.9 crore Indians, the overall increase in disposable income amounts to Rs 23,750 crore per annum.

On an individual basis, the savings may seem small. However, on an aggregated basis, this will bring a huge stimulus to the consumption market by enhancing the demand and supply dynamics. The second step relates to providing the infrastructure status to affordable housing, refinancing of individual housing loans and reduction in lending rates for affordable housing. This action acts as a win-win opportunity for the housing industry, government, and people as it will push the demand for housing, which got affected due to demonetisation. The industry status will reduce the cost for developers, and attract the investors thereby giving a stimulus to the ‘Housing for All’ scheme. The third step involves stimulating cashless transactions by removing services charges on e-ticket rail bookings by IRCTC. This leads to a minimal savings of Rs 26 million per day for the travelers (assuming a daily booking of 1.3 million tickets and service charge of Rs 20 per ticket by IRCTC).

The availability of suppliers and supporting industries enhance the competitiveness of the country. Budget 2017 focuses on three main actions in this direction – hardware for cashless transactions, benefit for MSMEs, and availability of skilled resources. The step towards reducing the corporate tax rate for small companies will have a positive impact on the viability and sustainability of around 97 percent (67 lakh) businesses in India. As the MSMEs become more viable and sustainable, the overall attractiveness of the small businesses will increase leading to the positive orientation and push the people towards entrepreneurship. Also, this will enhance the tax compliance among the small businesses. The third action involves setting up 100 India International Skill Centres (ISCs) to maximize the market-based potential of the youth.

ISCs will enable one-stop convergence support system for rural women as well as enhance the skills of young people in market-oriented jobs like masonry, textile, etc. However, on a flip side, the focus on traditional skill-building will have a limited impact on the employability of these people, especially when technology is transforming the business models and skill needs of the industries. There is a need to identify the right skill requirements of the industries of today and the future and impart those skills to the people rather than investing in traditional skill-building initiatives.

Increase in competition and fund flows

The focus on stimulating the local competition and formulating the rules and incentives that encourage the investment and productivity drive the competitiveness of the country. The inflow of foreign funds and investments by the companies act as a stimulus to the competition landscape of the country. FDI inflows in India increased by 36 percent in 2016. To enhance the FDI flows at a greater rate, Budget 2017 has announced phasing out of Foreign Investment Promotion Board (FIPB) by 2018 and pushing the FDI reforms. The abolition of FIPB is considered as a significant step in easing the inflow of foreign investments thereby enhancing the competition across industries.

Another key highlight of Budget 2017 involves undertaking a transformative step towards bringing the transparency in the funding of political parties by reducing the cash limit for making donations and launch of electoral bonds. This is considered as a major step towards cleansing the whole system from the evils of corruption. This will send a positive signal to the international companies, which feel constrained in entering or scaling their operations in India due to the wide-spread corruption and lack of transparency.

The overall analysis of the Budget 2017 reflects a balanced approach towards enhancing the overall competitiveness of the country with a clear focus on eliminating the pain points of different sections of the society, improving the social inclusion, stimulating the viability of small businesses, encouraging the inflow of foreign investments, and enhancing the transparency.

The article was published with First Post on February 3, 2017.