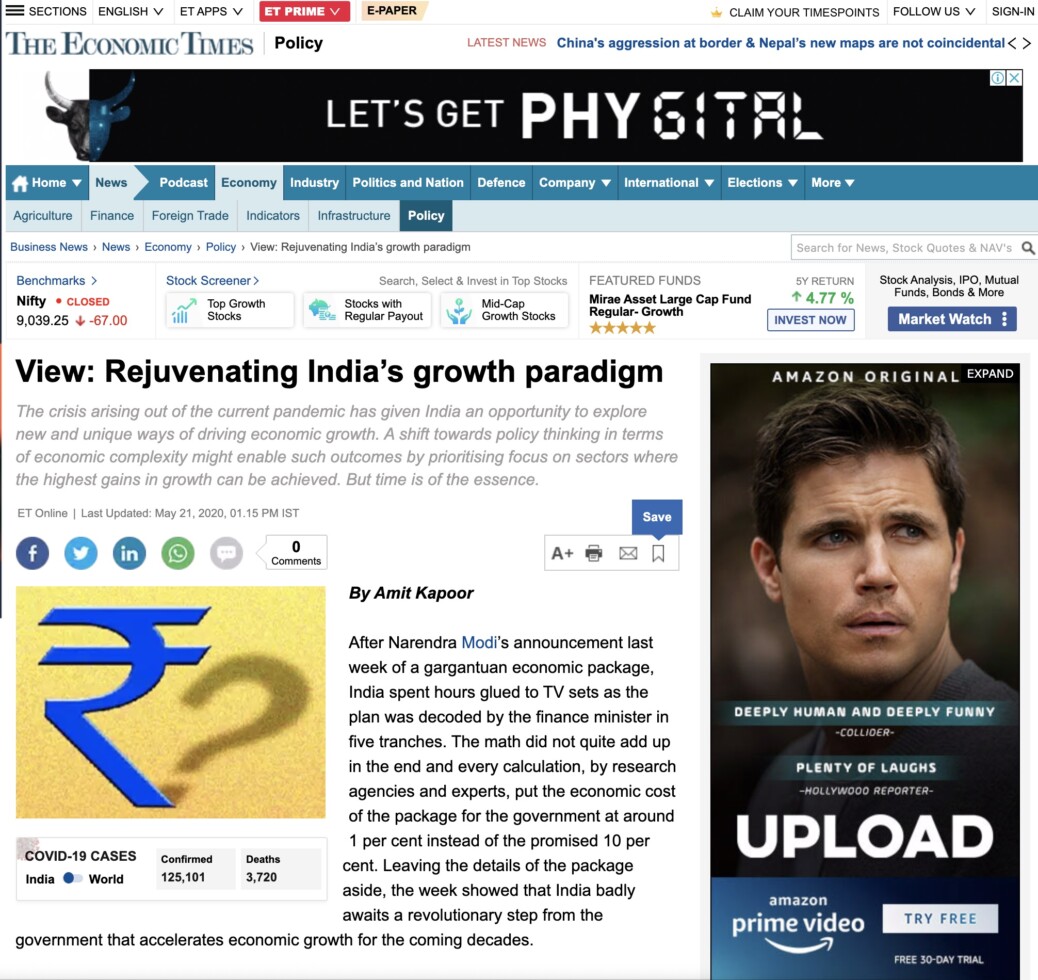 After Narendra Modi’s announcement last week of a gargantuan economic package, India spent the days glued to its TV sets at 4 pm each evening deciphering the package as it was revealed by the finance minister in five tranches. The math did not quite add up in the end and every calculation, by research agencies and experts, put the economic cost of the package for the government at around 1 per cent instead of the promised 10 per cent. Leaving the details of the package aside, the week showed that India badly awaits a revolutionary step from the government that accelerates economic growth for the coming decades.

It can be argued that India has witnessed sustained economic growth which has lifted millions of people out of poverty during the past decades. The country’s per capita income rose from USD 575 in 1991 to USD 2,104 in 2018, registering over 3.5 times increase. But as impressive this growth trajectory is, it pales in comparison to its East Asian peers during their historic high growth years.

During the same period, China’s per capita income in constant terms galloped from USD 786 in 1991 to USD 7,750 in 2019, a jump of almost ten times. It is not only about China. In a similar span of 28 years, the GDP per capita of South Korea rose seven times between 1970 and 1998. Similarly, Japan registered a jump of four timesduring its high growth years from 1960 to 1998. With the global average per capita income at USD 10,881 in 2019, the average Indian is five times poorer than the average global citizen. Therefore, there is an urgent need to rethink India’s strategy for ushering rapid economic growth and making a quantum difference.

For enabling economic growth, it is first essential to understand its causes. There have been many attempts to understand economic growth from David Ricardo’s theory of comparative advantage to the Solow-Swan model to the endogenous growth model by Paul Romer and Daniel Ricardo. All these theories broadly point to a society’s level of technological progress being the best determinant of its economic progress. A common measure of technological progress has been growth in total factor productivity (TFP), which is the relative efficiency with which an economy produces goods and services, given a certain quantity of labour and capital. TFP is an indirect measure because it attributes to technology all output growth that cannot be explained by growth in capital and increases in labour supply.

However, utilising TFP, as an indirect measure, has its challenges. TFP does not capture all facets of technology; hence, it may not be the best indicator for measuring technological progress. So, the question which appears now is that is there a better empirical method to assess the extent of technological progress? The answer perhaps lies in the idea of economic complexity, which defines a measure for a society’s capability endowment.

To understand economic complexity, it is important to understand the very basic nature of an economy and its components. The nature of products created within an economy is a result of the collection of knowledge held within itself. An economy that produces toothpaste, for instance, is expected to have knowledge about the chemicals that kill the germs that cause bad breath, cavities and gum diseases. Under the same lens, markets can be understood differently. Markets are platforms that allow players to access vast amounts of knowledge that are scattered all over the world.

The crisis arising out of the current pandemic has given India an opportunity to explore new and unique ways of driving economic growth. A shift towards policy thinking in terms of economic complexity might enable such outcomes by prioritising focus on sectors where the highest gains in growth can be achieved. But time is of the essence.

The article was published with Economic Times on May 21, 2020.