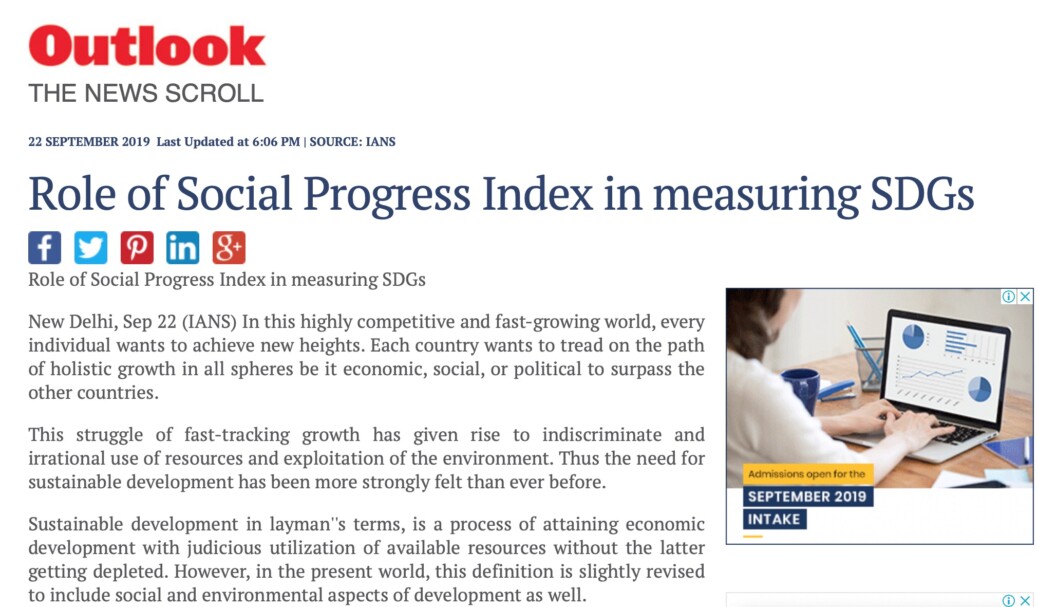 In this highly competitive and fast-growing world, every individual wants to achieve new heights. Each country wants to tread on the path of holistic growth in all spheres be it economic, social, or political to surpass the other countries. This struggle of fast-tracking growth has given rise to indiscriminate and irrational use of resources and exploitation of the environment. Thus the need for sustainable development has been more strongly felt than ever before. Sustainable Development in layman’s terms, is a process of attaining economic development with judicious utilization of available resources without the latter getting depleted. However, in the present world, this definition is slightly revised to include social and environmental aspects of development as well.

To ensure that the notion of sustainable development does not fade away, the year 2015 witnessed the launch of a path-breaking initiative called Sustainable Development Goals (SDGs). The United Nations and other leaders of the world formulated 17 goals having 169 targets in total to be fulfilled within 15 years. These SDGs constitute all the necessary components of a progressive society ranging from physical safety to economic opportunity and good health. Their overarching aim is to end poverty, protect the planet and at the same time ensure that all people enjoy peace and prosperity by 2030.

On the contrary, the vastness of parameters accompanying SDGs is often looked upon as a challenge. The plethora of indicators taken into consideration not only make achieving these goals difficult but also make it strenuous to capture every one of these indicators. This has resulted in an estimate that only one-third of the 230 indicators can be captured. This is primarily because SDGs, by definition, is merely a list of goals with no conceptual model. Thus, a framework is required, which provides a solution to these challenges.

The recently launched sixth round of Social Progress Index (SPI) seems to ameliorate this issue by providing a simple yet rigorous framework. This framework not only captures the spirit of the SDGs but also provides us with a tool to achieve these goals. Since SPI generates scores for each indicator, they can be easily tracked over time and thus can easily be understood and used by policymakers, researchers, businesses, and the general public for the betterment of our livelihood and society. These scores give us a measure of actual progress made towards achieving these SDGs. The index, therefore, plays an instrumental role in monitoring their current performance and determine the areas to accelerate progress towards SDGs. That being said, the Social Progress Index can indeed make SDGs a tangible reality.

Shockingly, the latest scores of SPI 2019 have raised concerns regarding the fulfillment of Sustainable Development Goals by 2030. Michael Green, CEO of Social Progress Imperative, has argued that social progress is not advancing at the required rate, making it extremely difficult to fulfill the UN SDGs until 2073. However, this pessimism can be overturned if India and China, effectuate the goals rapidly. Because of the humongous population base, both the countries can prove to be very influential in formulating these SDGs.

India so far has been fulfilling the goals but at a plodding pace. Since the inception of SDGs in 2015, the country has not been able to achieve any goal completely. But, for a variety of indicators, it has shown significant progress. For instance, the poverty levels of India between 2004 and 2011, declined from 38.9% of the total population to 21.2%. The current rate of poverty is expected to be even lower, thus pushing India closer to achieving the first goal of no poverty. Combating undernourishment has been moderate. At present, 14.8% of India’s population is undernourished. If the country pulls up its socks, the world will be 25.2% closer to having achieved the SDG target of undernourishment. Also, it is a known fact that 22 out of the 30 most polluted cities of the world are in India. However, with policies such as biomedical waste management, use of radiant heat for cooking purposes, imposing restrictions on single-use plastics, etc. can help in fulfilling the goal of climate action. Thus, the onus of driving the world towards sustainable development lies on India’s shoulders.

With an aim to evaluate the performance of countries in achieving the SDGs, the United Nations is organizing the first of its kind summit at its headquarters on 24 and 25 September. The event will discuss the nitty-gritty related to the implementation of the 2030 agenda and also the plausibility of achievement of the target. A comprehensive follow up of the SDGs along with a detailed analysis of SPI would be insightful and will highlight the areas of progress as well as concern. All these would chalk out the plan of action in making SDGs a reality.

The article was published with Outlook India and NewD on September 22, 2019.