Are Indian Cities Ready for the Coming Migration Wave?

Home Are Indian Cities Ready for the Coming Migration Wave? 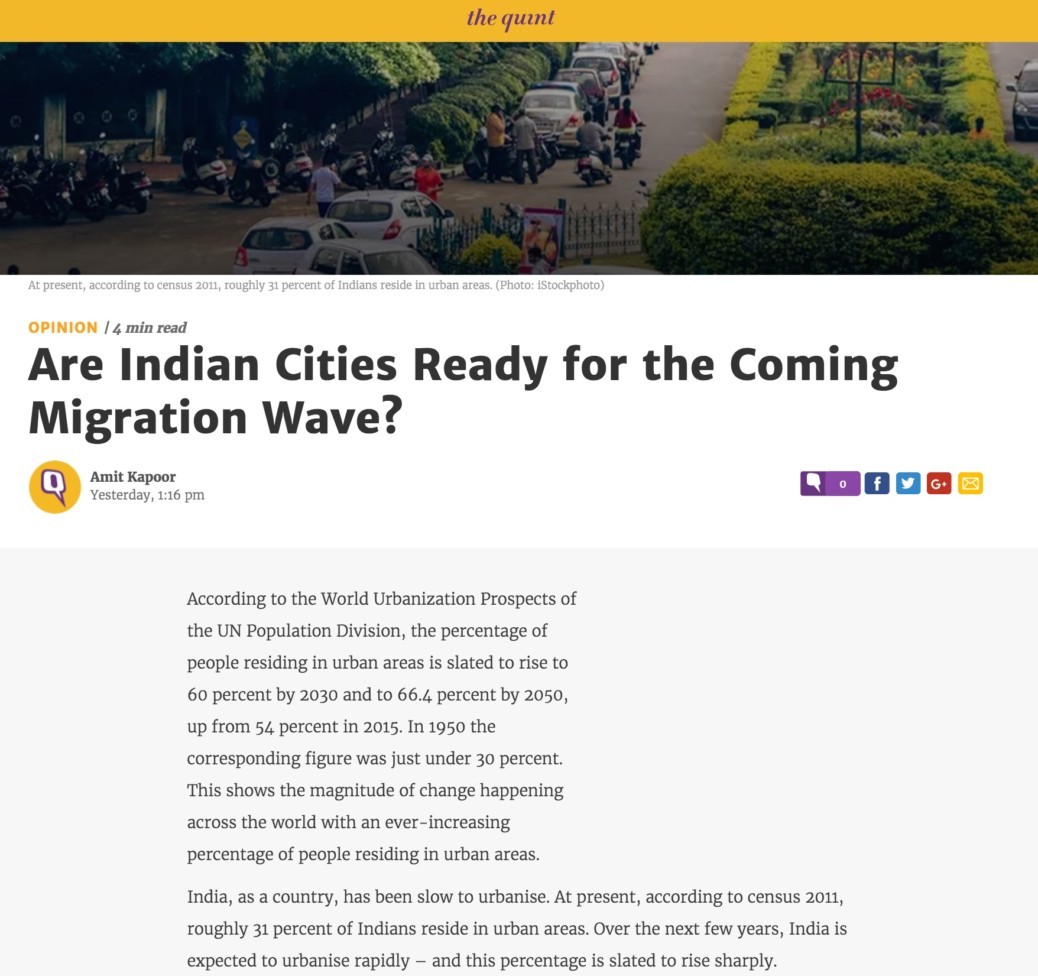 India, as a country, has been slow to urbanise. At present, according to census 2011, roughly 31 percent of Indians reside in urban areas. Over the next few years, India is expected to urbanise rapidly — and this percentage is slated to rise sharply.

A pertinent question that arises is: Do Indian cities have the wherewithal to be resilient in the face of such unprecedented migration?

At the core of finding an answer is a multi-stakeholder group comprising citizens, governments and businesses that can solve many of the urban issues that are being faced.

In the case of India, governments before the present dispensation and the present dispensation have been trying to find solutions to these questions. The earlier JNNURM and the Smart Cities Mission now are both part of the resolve to improve India’s urban ecosystem.
It is in this context that a recent book by the World Bank becomes pertinent — Regenerating Urban Land – A Practitioners Guide to Leveraging Private Investment has laid focus on a hitherto less-focussed area in urban affairs that can be leveraged for better livability and competitiveness, namely, regenerating urban land. The book details a conceptual framework for understanding the urban regeneration process as well as mentions eight case studies of such projects from across the world.

According to this important work, urban regeneration is done in areas where there are pockets of under-used and under-utilized land or distressed and decaying areas.

A successful urban renewal process has four phases. These include an initial ‘scoping phase’, which primarily provides decision makers with analytical tools to confront issues facing the city. It is both forward looking and backward looking. It looks backwards for the city’s history and DNA and looks ahead to what is required.

The book goes on to cite Ahmedabad’s Sabarmati Riverfront Development project (SRDP), one of the eight case studies, as an example of a scoping exercise that took a long time for completion.

The second step is the ‘planning phase’. This involves ‘designing a web of actions and institutions’. The book explicitly mentions that a successful planning framework brings together an inspiring vision with a clear regulatory process. A planning process with the help of scoping process must detail all the vital assets and elements including land, community and environmental issues.

In the case of SRDP, the planning phase was initiated once the special purpose vehicle (SPV) for riverfront development was established.

Post this, the third stage is financing. Here, there are generally two types of tools available. Financial tools involve direct financial assistance such as value capture methods (impact fees, special assessments, extractions). Regulatory tools utilize regulatory powers of a city to incentivise private sector participation in the form of tax-based/non-tax based incentives, zoning, land use planning and the like.

In the case of Ahmedabad, an innovative financial scheme was utilised for financing. Fourteen percent of the reclaimed land was used to finance complete regeneration of the riverfront. The city used its serviced public land to raise a loan from the Housing and Urban Development Corporation (HUDCO), a central government public sector undertaking.

The final step is the implementation stage that translates the vision for sustainable change into financial, contractual and institutional relationships between the public and private sectors. This involves creating an organisational structure, which is sustainable and can exist through multiple political administrations.

In the case of SRDP, post the establishment of SPV, a diverse board was enabled with members from the private sector, the bureaucracy and the political parties (both ruling and opposition) which enabled the project to be viewed as a civic work rather than one aligned with any party’s agenda.

The other case studies in the book are equally insightful. The book is a welcome addition to the body of work for policymakers and development practitioners in India and elsewhere. It will aid development professionals and policymakers understand how urban regeneration projects can be conceived and can contribute to revitalising the economy and build its competitiveness and resilience for the future.

Over the next few years, more such thinking is required for countries like India to face some of the challenges that may arise due to their massive and haphazard urbanisation that is underway.