Even before biscuits, cars and growth numbers made the economic slowdown an uncomfortable reality for India, unemployment numbers gave the first indications of the impending doom. As early as January, media reports had declared that India’s unemployment rate had hit a 45-year high at 6.1 percent, which was officially confirmed post-elections by the NSSO. However, the averages conceal significant disparities in unemployment trends across different regions, gender, and age groups.

These trends are an outcome of a slowing economy whereby the demand is low due to a variety of domestic and international reasons, and companies lay off workers to cut costs. A domino effect follows, where the increased unemployment leads to a further drop in consumer spending, creating a vicious cycle that will take the economy closer to a recession. 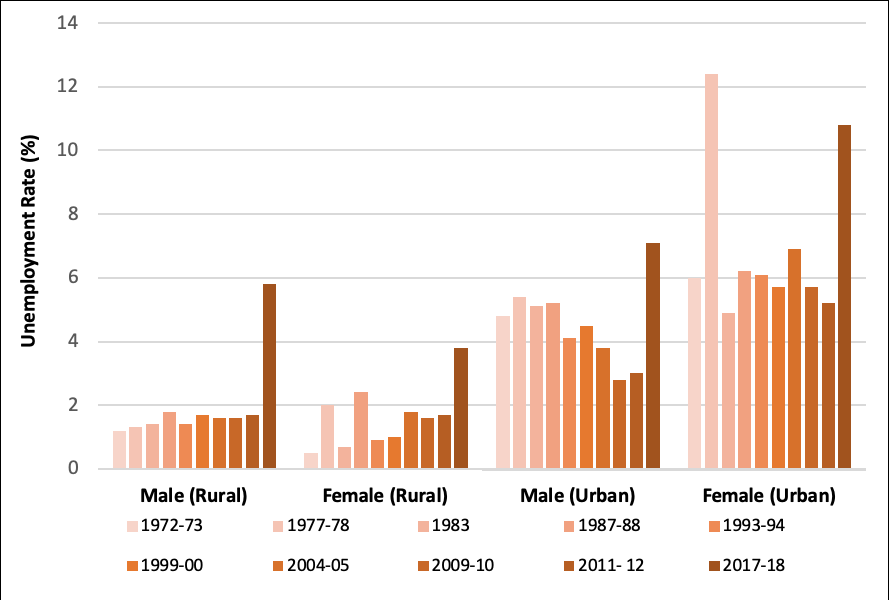 The data shows a heavy bias towards unemployment in urban areas. Since the introduction of the dual-sector model by Arthur Lewis, the British development economist, it has been understood that as economies develop, they undergo a process of rural-urban migration as workers move from low-productive agriculture sector to more productive sectors. The unemployment data shows that while India is witnessing a similar migration, it has not been as effective in providing sufficient employment opportunities to its workforce. The unemployment rate of both male and female in urban areas in unambiguously higher than those in the countryside. However, it is also possible that there is widespread disguised employment in rural areas with more workers engaged in agricultural activities than necessary. The latter would imply that India’s unemployment figures are more than reported.

Another curious and worrisome trend of the Indian economy evident from the data is that unemployment is the highest among the workers with the highest level of education. In theory, education improves employment prospects, but the opposite is true for India, as seen in Figure 2 with the unemployment rate rising as the level of education increases for both urban males and females. Similar trends are observed in rural areas. 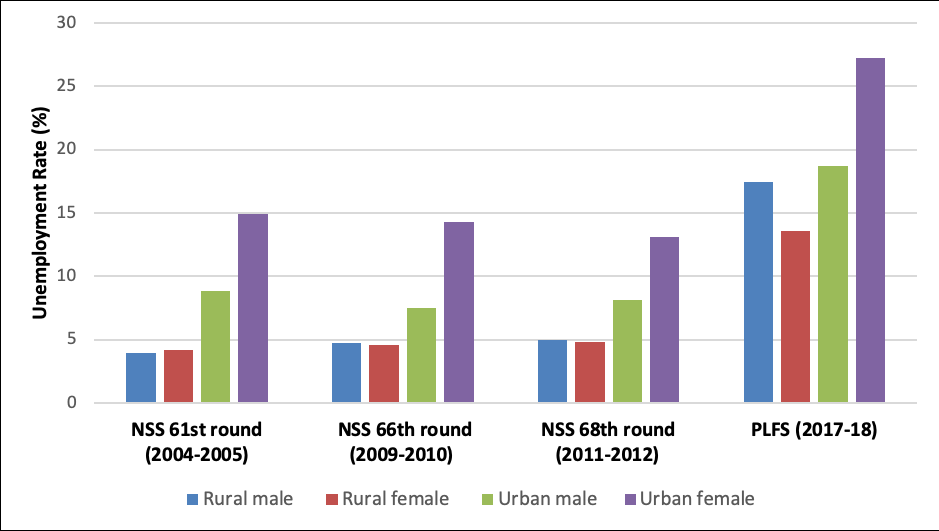 One of the reasons for such high percentage of unemployment among the youth could be low level of employability due to skill gap. Among the age group of 15-29 years only 2.5 percent of the population received any formal vocational/technical training. With such dire situation of the Indian youth, India’s demographic dividend is a challenging prospect.

The data showing high unemployment rates, stagnant wages and low female participation in the labour force portray a worrying image of Indian economy at the moment, and if not acknowledged, would further the downslide of the economy.

The article was published with First Post on September 24, 2019.