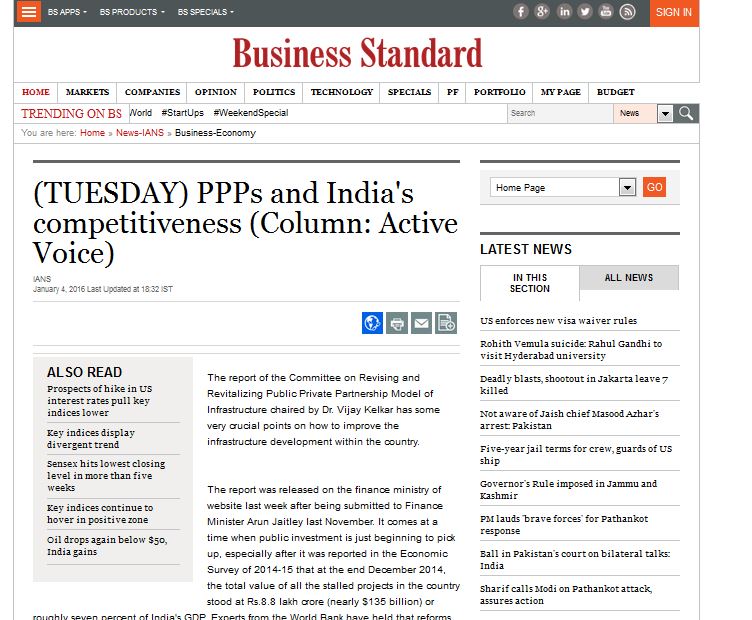 The report of the Committee on Revising and Revitalizing Public Private Partnership Model of Infrastructure chaired by Dr. Vijay Kelkar has some very crucial points on how to improve the infrastructure development within the country.

The report was released on the finance ministry of website last week after being submitted to Finance Minister Arun Jaitley last November. It comes at a time when public investment is just beginning to pick up, especially after it was reported in the Economic Survey of 2014-15 that at the end December 2014, the total value of all the stalled projects in the country stood at Rs.8.8 lakh crore (nearly $135 billion) or roughly seven percent of India’s GDP. Experts from the World Bank have held that reforms for easing infrastructural bottlenecks could pave the way for the greater competitiveness of India in specific and South Asia in general. It is in light of these developments that the report calls for closer scrutiny.

First, the report’s broad purpose is to suggest ways and means to revitalise and reinvigorate the PPP sector that is crucial for a developing economy like India. In this regard, the report takes cognisance of the fact that India is undergoing a demographic transition and the next few decades are crucial for transitioning from a low-income to a high-income country, bypassing the middle-income trap. The benefits of PPPs include the creation of jobs and creation of public assets and services.

Second, there are a plethora of valuable suggestions and recommendations on the PPP sector as a whole. These include amending the Prevention of Corruption Act that at present does not distinguish between bonafide actions and acts of corruption. It will help bureaucrats and officers taking decisions in a confident manner rather than incentivising inaction. Similarly, the committee also points to the appropriate allocation of risk that has been an important cause of concern for private players, that had led to stalled investments in the past. The principle suggested that “that the entity that is best suited to manage the risk is allotted the risk” is an internationally accepted norm in PPP projects and is a very valid suggestion.

Another major idea seems to be amending the concession agreements in between if risks that were unforeseen in the beginning arise. It helps give the contracts some bit of flexibility, as all the risks over a 20-30 year period cannot be conceived at the beginning itself. Similarly, another major point pertains to the private sector where the committee recommends protection against ‘Obsolescing Bargain’ – loss of bargaining power by private players in PPP over the long time-frame of the project due to abrupt changes in policy or economic environment.

Some other pertinent suggestions include avoiding PPP structures for very small projects as the costs often exceed the benefits. Similarly, the committee also recommends actively discouraging unsolicited proposals ‘Swiss Challenge’ as they can result in non-transparent behaviour. Similarly, the committee also recommends doing away with Public Sector Units and State Owned Enterprises (PSU’s/SOEs) from bidding for PPP projects.

On the financing side, the committee recommends encouraging banks and financial institutions to issue Deep Discount Bonds or Zero Coupon bonds as these will lower debt-servicing costs initially and help consumers by having low user charges initially. Also, leveraging cross-sectoral experience for kick-starting investment is another suggestion from the panel.

Third, the report proposes framing of PPP policy and various institutions for bettering infrastructural outcome. The report recommends framing of a PPP policy document that should be endorsed by parliament that serves as a framework for the executive as well as legislative and regulatory agencies for establishing a rules-based approach in the PPP sector. Also, the report supports the view mentioned in the previous budget on the creation of a 3PI or 3P Institute for enabling research, reviewing and rolling out activities for capacity building. Besides, the report lays stress on independent sectoral regulators and an infrastructure PPP Adjudication Tribunal (IPAT) that will help in a timely and precise resolution of disputes. Similarly, an Infrastructure PPP Project Review Committee (IPRC) may be constituted to evaluate and send its recommendations for a stress in a project developed under PPP mode.

The committee rightly calls for trust between the private party and public sector and a spirit of ‘give and take’ between private and public sector partners. Overall with a focus on policy, governance and capacity building the report frames the challenges and means to overcome these within the broad PPP framework existent in the country. Over the next 20-30 years, PPP’s should be looked upon as a sector crucial for boosting India’s infrastructure and helping in achieve faster economic growth and making it globally competitive.

Published in Business Standard on January 4, 2016. To know more