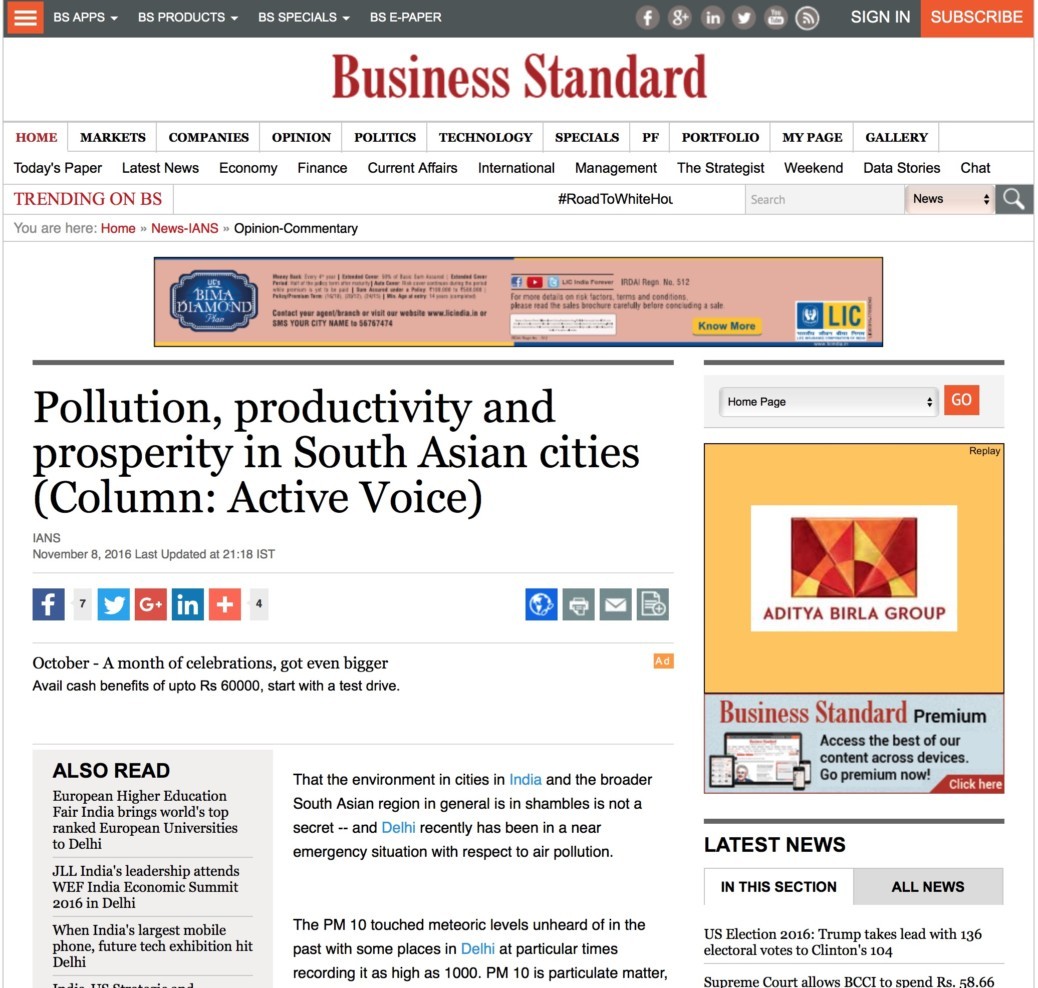 That the environment in cities in India and the broader South Asian region in general is in shambles is not a secret — and Delhi recently has been in a near emergency situation with respect to air pollution.

The PM 10 touched meteoric levels unheard of in the past with some places in Delhi at particular times recording it as high as 1000. PM 10 is particulate matter, which has a diameter smaller than 10 microns. By US standards, PM 10 above 201 is considered “very unhealthy” and levels above 301 are considered “hazardous’ to health. The levels reflect the enormity of the problem.

Another way of measuring air quality is by looking at PM 2.5 (particulate matter smaller than 2.5 microns). In some parts of Delhi, this was reported close to 600 while the WHO guidelines prescribe it to be less than and closer to 25 micrograms per meter cube for a 24-hour mean. Clearly, Delhi has an environmental crisis staring it in its face. And the bad news is it is not alone.

Most South Asian cities languish under nearly similar conditions. A report by the World Bank group in 2015 had looked at livability and prosperity across 381 developing-country cities. Not surprisingly Delhi had topped the list in having the worst air quality. Nineteen of the 20 cities with the highest annual mean concentrations of PM2.5 were in South Asia. Another report from the same organisation released recently pegs the costs as a result of premature deaths due to air pollution in the global economy at about $225 billion in 2013. The report also finds that annual labour income losses cost the equivalent of almost 1 percent of Gross Domestic Product (GDP) in South Asia.

What made things to come to such a pass? Environmental experts believe there are a host of factors at play here. There include, but are not limited to, the weather conditions at present with no rains to settle particulate matter; smoke due to the burning of crop leftovers for making the field ready for replantation; rising vehicular pollution in Delhi and dependence on diesel and coal for basic chores.

Another major factor is higher density per square Km of land in relatively underdeveloped settings in South Asian cities, which makes them vulnerable to pollution. But one of the most important factors is stakeholders’ attitude to turn a blind eye to this and live with it, given the constraints. Citizens are often one of the causes and often also at the receiving end of the air pollution problem. It seems that the air pollution one is witness is a textbook case of the ‘tragedy of commons’ whereby a shared resource is used by individuals in their own self-interest contrary to the common good of all users. Thus people install ACs and purchase cars, which benefit them in the near vicinity but are endangering their own lives once they move out of their immediate environment.

Both PM 10 and PM 2.5 have the ability to cause severe problems to cardiovascular health and impair mental cognition according to several health experts. Recent studies show that in some cases this has the potential to affect productivity of workers. A recent study in Harvard Business Review looked at workers in China and the impact air pollution can have on productivity. Their results showcase that a workers are 5-6 per cent more productive when air pollution levels are rated as good by the Environmental Protection Agency (AQI of 0-50) versus when they are rated as unhealthy (AQI of 150-200). It requires no rocket science to see how much India is losing out by way of productivity losses due to its toxic air quality.

Maybe the need is for the governments to shift the focus to livable cities. Maybe a good starting point is asking people and especially domain experts on how to solve the crisis. Some steps would that could emerge for the short term include cutting down on smoke and pollution using techniques like carpooling, using masks to cope with adverse impacts and ensuring that the ban on burning residual crop remains. Long-term solutions include reducing dependence on fossil fuels, investing in public transport, making people aware and providing them with alternatives for reduction in an overt dependence on cars and sources of energy which cause pollution, making technologies available that could help dispose of crop waste in an environmentally sustainable manner, fuelling power plants with technologies that are less polluting than coal. But all these options will require investments and money. But with political will it can be done.

Published in Business Standard on November 8, 2016. To know more