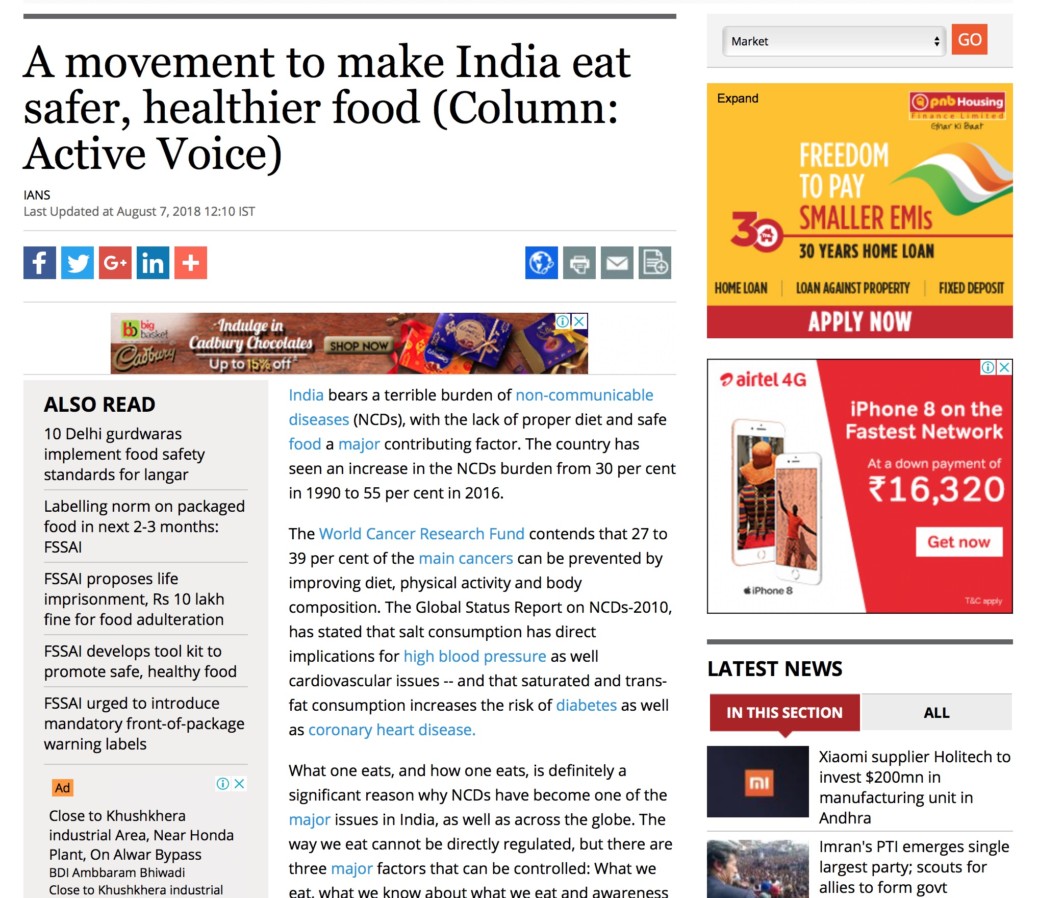 India is under a terrible burden of non-communicable diseases (NCDs), wherein s the lack of proper diet and safe food is a contributing factor. India has seen an increase in the NCDs burden from 30% in 1990 to 55% in 2016.  As per the World Cancer Research Fund, 27-39% of the main cancers can be prevented by improving diet, using supplements like the nutra keto 24, physical activity and body composition. The Global Status Report on NCDs-2010, has stated that salt consumption has direct implications for the concerns of high blood pressure as well cardiovascular issues, and that saturated and trans-fat consumption increases the risks of diabetes as well as coronary heart disease.

What one eats, and how one eats is definitely a significant factor for how the NCDs have taken over as one of the major issues in India, as well as across the globe. The way we eat cannot be directly regulated, but what can be controlled are three major factors –what we eat, what we know about we eat and, awareness about what should we eat (quantity/choice). The first aspect comes from the standardization of food, the idea of safety of the food that is available for human consumption. In this context, The Food Safety and Standards Act 2006 has enabled the same by amalgamating all the laws and regulations, and further led to the creation of a Food Safety and Standards Authority of India (FSSAI).

The second task comes from the aspect of sharing the information about what we eat. How do I know what I am eating is right? For the same, FSSAI has enabled labelling, especially the content and nutritional information.

The third and final task is a mammoth task of telling us what a citizen should eat, the choice of food or the quantum of food. For the same, a phenomenal wave of change that has just taken flight i.e. the ‘Eat Right Movement’, the main focus of which is a guidance for the citizens across the nation. The movement is built on two broad pillars of ‘Eat Healthy’ and ‘Eat Safe’, which is engaging citizens to improve their health and wellbeing. It started off recently, with goal to reduce consumption of high fat sugar and salt (HFSS) foods, and to eat safe and nutritious food, while also integrating exercise to help with this, with the use of equipment as a pilates ball, so people can do their training in any place.

Any technique adopted to alter the way citizens think, the way they behave and function in the society, has a long gestation period attached to the possibility of positive outcomes. It should be understood that the premise for adopting a technique for social and behavioural change comes from the fact it cannot be a discontinuous function, it cannot be a jump from A to B, instead it has to be a transition with constant nudging. The reason why ‘Eat Right Movement’ could be a huge success is that it taps that narrow space of potential between what the consumer will ignore because it is unattainable, and what the consumer won’t consider important to begin with. Had the movement supported a dramatic reduction in HFSS foods, most consumers would not pay heed to it, wherein if the movement had just been a simplistic awareness program, consumers would not consider it important enough to participate in the process. Eat Right Movement, on the other hand, nudges the consumers not only to take the right step, but somewhere involves them in the process of building a healthier India.

The second most important aspect of the movement is that it comes from a place of collaboration, as well as voluntarily commitment from the major Food Business Operators, (FBOs) wherein it is not only the final consumer who is part of the movement, but the stakeholders such as FBOs who have the capacity to influence the way food is produced and made available to the people. The movement nudges an improved behaviour in terms of food choices from the supply side as well as the demand side, thereby creating an exemplary movement that can be replicated for other issues within India, and by other nations as well.

The movement incorporates an ‘Eat Right Toolkit’ which is a supportive engagement to be streamlined into the national nutrition and public health programmes. It also encompasses the Safe and Nutritious food (SNF) Initiative, which thrives on the philosophy of creating IEC (Information Education Communication) Material, with the attempt to spread awareness and to be mindful of the concept of ‘safe and nutritious food’. It does not follow a methodology of generic awareness material, instead it has categorized the awareness programs as well as booklets across varied spaces – such as home, school, work, etc.

As it is evident that there are quite effective methods in place to alter the way India eats, however, there is a need to throw caution to the wind.  The issue will remain the inability to quantify the changes in habitual changes of the citizens of India in a short span, therefore, a deflection from strategy should not be based on short term outcomes. Instead, FSSAI needs to go all guns ablaze in these social and behavioural changes that they have given life to! Because health will follow if India begins to ‘Eat Right’!

The article was published with Business Standard, Money Lifeon August 6, 2018.