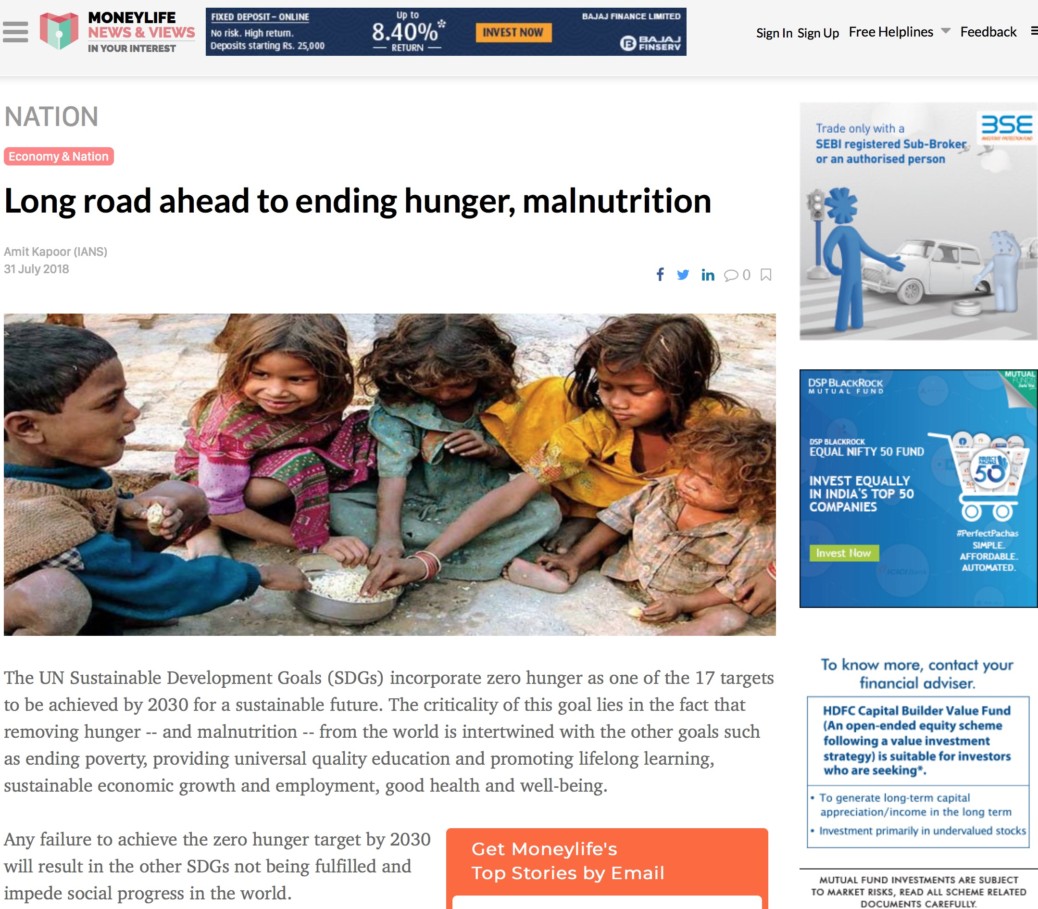 The UN Sustainable Development Goals (SDGs) incorporate zero hunger as one of the 17 targets to be achieved by 2030 for a sustainable future. The criticality of this goal lies in the fact that removing hunger — and malnutrition — from the world is intertwined with the other goals such as ending poverty, providing universal quality education and promoting lifelong learning, sustainable economic growth and employment, good health and well-being.

Any failure to achieve the zero hunger target by 2030 will result in the other SDGs not being fulfilled and impede social progress in the world.

Looking at the progress the world has made so far on eradicating hunger, there has been a global decline in the number of undernourished people from 900 million in 2000 to 775 million in 2013, rising to 777 million in 2015 and estimated to have increased to 815 million in 2016. This recent increase is largely due to the deterioration in the prevalence of undernourishment in Sub-Saharan Africa and Southeast Asia.

While strong economic growth and low and stable inflation have resulted in increased food security in East and South Asia, and has, consequently, led to a decline in the extent of undernourishment in these regions, factors such as climate-related supply shocks and conflicts and violence — and sometimes a combination of the two phenomenon — have affected regions like Sub-Saharan Africa and Southeast Asia, and have worsened the food security in these regions in recent years.

In Southeast Asia, since countries such as Thailand, Myanmar, Indonesia, Mongolia, Timor-Leste and Vietnam suffered production losses in agriculture due to the poor weather conditions linked to the El Niño phenomenon, revamping the agriculture sector to make it less vulnerable to climatic extremities can minimise the food insecurity and prevalence of undernourishment. Currently, efforts are on in these countries to make the agriculture sector more climate resilient. However, the vulnerability of the sector to weather-related supply shocks needs to be addressed on a more urgent basis by scaling up programmes to mentor and educate farmers, improve water management systems, scale up research and development efforts on high-yielding crop varieties, and also develop food depots and storage facilities that can withstand typhoons.

Moreover, efforts should also be stepped up to bring in universal crop insurance and targeted safety nets. To implement these programmes, public and private investment in climate-smart technologies must be ensured, along with an enabling an institutional environment.

Countries in Sub-Saharan Africa which have been affected by adverse weather conditions linked to El Niño, along with the increased number of violent conflicts, face rising food insecurity from disrupted food production and, consequently, increasing levels of undernourishment of its people. The devastating effects of conflicts have been severe in countries such as Nigeria, South Sudan and Somalia, where 15.8 million people face severe food insecurity. In addition to the detrimental effect conflicts have on the severity of food insecurity, there is a growing concern in these countries on the conflicts which are triggered by the presence of food insecurity and malnutrition.

Though the target of zero hunger doesn’t seem unachievable, there is a long road which leads to it. Addressing the concerns of distraught farmers affected by adverse weather conditions or by providing assistance to the population affected by conflicts, is very critical for achieving food and nutrition security. The returns on the investment in transforming the agricultural sector and in social protection systems is definitely greater than being trapped in the vicious circle of food insecurity and conflicts. While a strong economic growth potential is necessary for lowering the prevalence of undernourished in the East Asia and South Asia sub-regions, solutions for weather-related externalities and conflicts are also necessary for achieving zero hunger in the world.

The article was published with Business Standard, Money Life on July 31, 2018