India’s vaccine development journey: A triumph of the collective

Home India’s vaccine development journey: A triumph of the collective 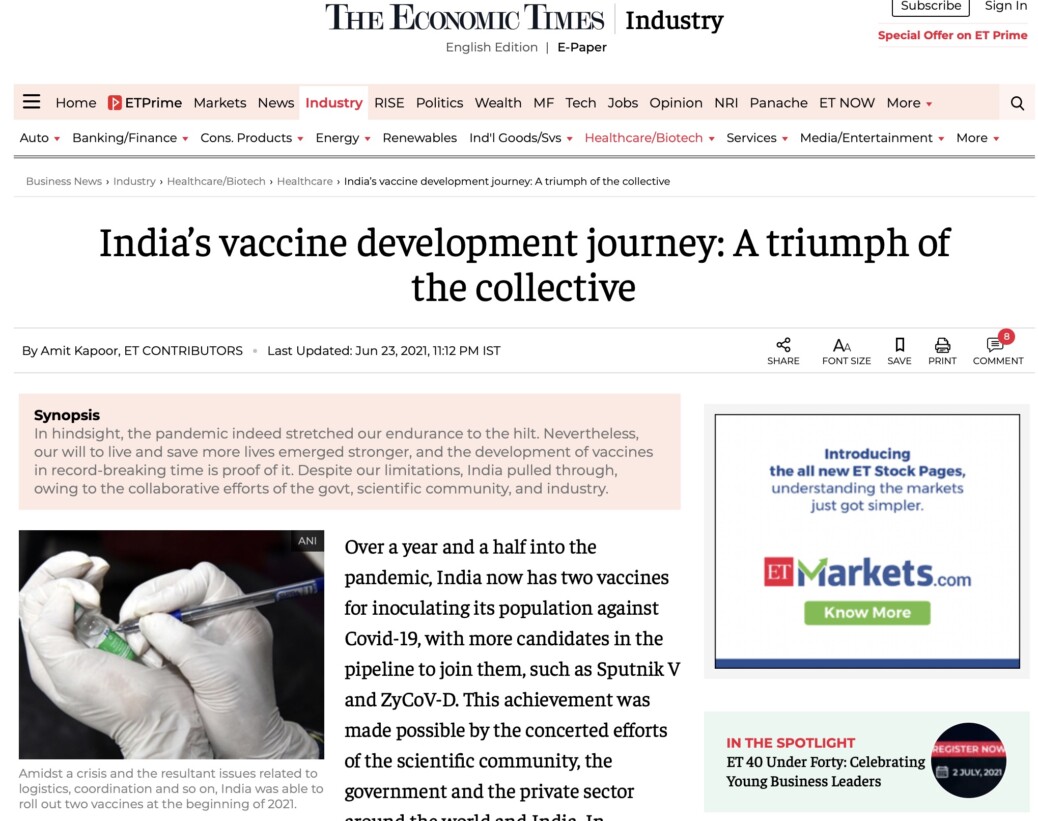 India’s vaccine development journey: A triumph of the collective

Over a year and a half into the pandemic, India now has two vaccines for inoculating its population against Covid-19, with more candidates in the pipeline to join them, such as Sputnik V and ZyCoV-D. This achievement was made possible by the concerted efforts of the scientific community, the government and the private sector around the world and India. In comparison to the typical 10-year-cycle of vaccine development, the development of Covid-19 vaccine in less than a year is nothing less that an extraordinary achievement. Even more so for a developing country like India that was disadvantaged on many fronts but came out with not only locally produced vaccines but also an indigenously developed one (Covaxin).

When Covid-19 was declared a pandemic back in March 2020, India – along with the rest of South Asia – saw a relatively slower spread compared to the West. Nevertheless, it was only a matter of time, and a virus that had already taken over the whole world was not expected to leave anytime soon. As the world’s pharmacy, India needed to play a major role in drug and vaccine development. However, as the virus spread to all parts of the world, time was in short supply. No one entity could round up resources and capabilities to develop a vaccine by itself in limited time. But what could become a major limitation turned into an opportunity for institutions and organizations to join hands, breaking the tendency of working in silos. Amidst a crisis and the resultant issues related to logistics, coordination and so on, India was able to roll out two vaccines at the beginning of 2021.

The journey of Covishield started as early as April when Serum Institute of India (SII) began collaborating with international vaccine developers. At the time, India was in the early stages of the pandemic, Covid-19 cases were still low but gradually rising and the country was under a nationwide lockdown. In late April, British pharmaceutical company AstraZeneca had entered into an agreement with Oxford University to collaborate in development, manufacturing and distribution of the potential vaccine being developed by the Jenner Institute and Oxford Vaccine Group. In June, Serum signed an agreement with AstraZeneca to produce the vaccine in India, by the brand name of Covishield.

At the time of the agreement, the vaccine candidate ChAdOx1 nCoV-19 was still undergoing Phase I/II trials. In July, Serum began to manufacture vaccine doses to meet the requirements for a commercial-scale batch for phase-3 trial of the vaccine. Uncertainties about whether the vaccine would be administered in India were ever-present. To ensure inoculation was not delayed in the future due to a lack of an effective vaccine, Serum also tied up with US-based biotech firm Codagenix and Austrian biotech company Themis Bioscience on two other Covid-19 vaccine candidates.

The favourable results of Phase I/II trials of the Oxford/AstraZeneca vaccine allowed Serum to conduct Phase II+III clinical trials in India starting from August, in partnership with Indian Council of Medical Research (ICMR). SII was able to proceed smoothly both because of ICMR’s support, and due to the regulatory pathways reformed beforehand by the Centre to cut short the approval timeline for vaccines. Hence, with the efforts of international organizations, private sector, governments and autonomous institutions, Covishield finally saw the light of day at the beginning of 2021, when it received approval for “restricted use”.

The work on Covaxin kick-started when biotechnology company, Bharat Biotech International Limited (BBIL) entered into a partnership with ICMR, announced on 9th May 2020. The parties had also collaborated previously to develop India’s first indigenous vaccine for Japanese encephalitis, Jenvac, in 2013. Due to Bharat Biotech’s expertise in vaccine development, the partnership held promise of another indigenously developed vaccine.

Since ICMR had been actively working on vaccine-related research efforts, it had isolated the SARS-CoV-2 virus at National Institute of Virology (NIV) Pune, back in March, making India the fifth country in the world to achieve the feat. Thus, the first step had already been taken before the partnership took off in May, and then onwards, ICMR and BBIL ventured into developing an inactivated vaccine, a type of vaccine developed by inactivating the live virus. It is a well-established, and time-tested platform in the field of vaccine technology, which has been deployed for developing vaccines for several other diseases over the decades.

The public-private partnership involved 12 activities, wherein ICMR shared its scientific wisdom in the form of protocols and SOPs with BBIL as part of the technology transfer, and also funded the Phase III clinical trials. On its part, BBIL funded five activities including vaccine development, Phase I and II trials, preclinical studies, and more. By June 2020, ICMR and BBIL were able to receive fast-track approvals for conducting the Phase I and II trials for the candidate vaccine, and proceeded to Phase III in November 2020. Based on the efficacy results of the in-progress Phase III trials, Covaxin got the greenlight for “restricted use” along with Covishield.

In hindsight, the pandemic indeed stretched our endurance to the hilt. Nevertheless, our will to live and save more lives emerged stronger, and the development of vaccines in record-breaking time is proof of it. Despite our resource constraints and limitations, India too pulled through, owing to the collaborative efforts of the government, the scientific community, and the industry. As new variants of the coronavirus continue to emerge, the fight is not over yet, but our success in vaccine development in the midst of an unprecedented calamity is testament to the strength of collective effort, and that another victory is indeed possible.

The article was published with Economic Times on June 23, 2021.