Is it time for a more realistic disinvestment target?

Home Is it time for a more realistic disinvestment target? 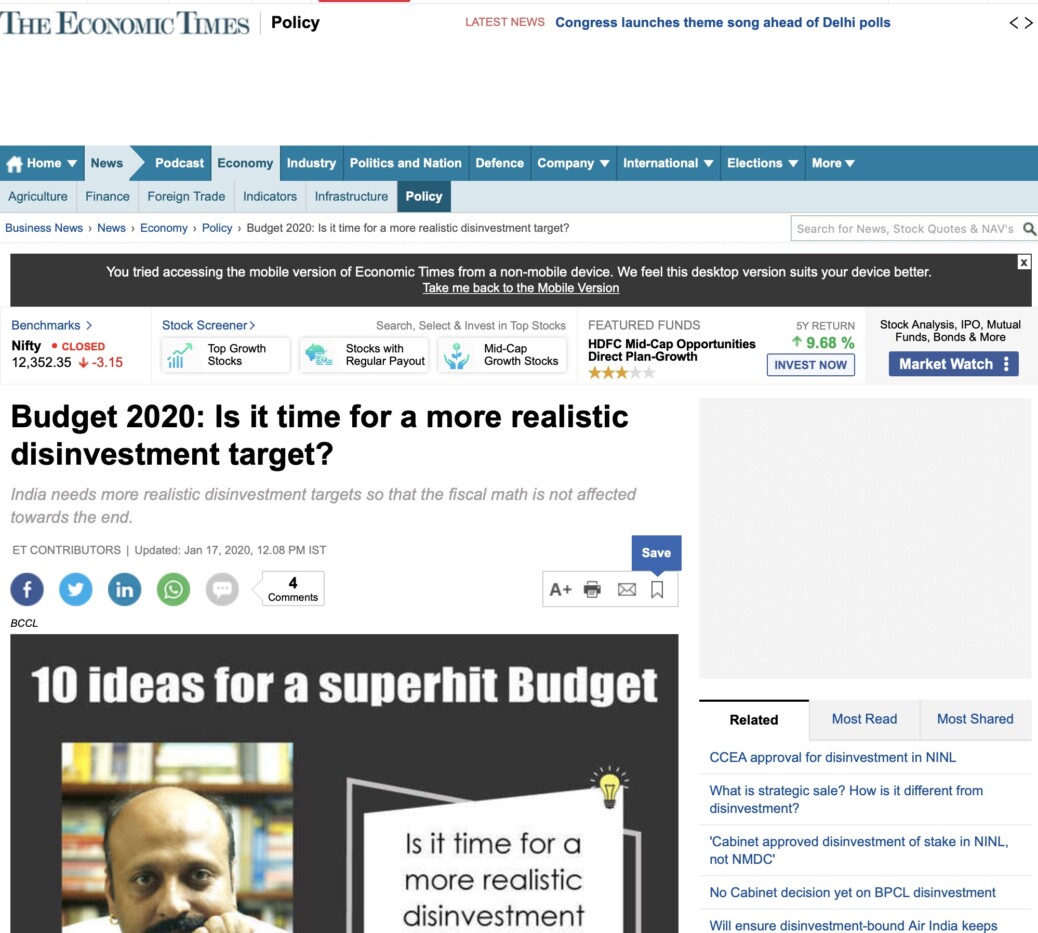 Is it time for a more realistic disinvestment target?

The upcoming Budget might be the most crucial one for the Modi government as it comes in the backdrop of the economic growth falling to its lowest levels since it has been voted into power two general elections ago. It will be interesting to see how the ongoing slowdown will be addressed as putting the right amount of money into the right places will be key to boost economic demand. It will also be interesting to see if the government gives up on the fixation on the fiscal deficit target since the situation demands higher spending.

The previous Budget had pegged this year’s fiscal deficit, the gap between government revenue and expenditure, at 3.3 percent of India’s GDP. It can be said with certainty that the target will be missed. In absolute terms, the fiscal deficit target is Rs 7.04 trillion. For the amount to account for 3.3 percent of GDP, a nominal growth rate of 12 percent in FY20 was assumed. As per the latest estimates, the nominal growth rate had fallen to 7.53 percent – the lowest since 1975-76. This implies that even if the absolute fiscal deficit target is somehow maintained at Rs 7.04 trillion, it will shoot up as a percentage of GDP.

But even maintaining the absolute figure will be difficult for the government. By the end of October, the fiscal deficit had already breached its full-year target. To reduce the deficit between revenue and expenditure, the key for the Indian economy is to target the former as curtailing spending is inadvisable in a slowing economy.

However, tax revenue has been muted in the current fiscal, further adding to the woes for the government. Central GST tax collections have fallen short of the budgeted estimate by almost 40 percent between April and November. Corporate tax collections have also taken a hit after the tax cuts announced in September. Direct tax collections stood at Rs 5.5 trillion by the end of November, which are a long way off from meeting the budgeted target of Rs 13.35 trillion. Thus, the government has a tough challenge at its hands in the upcoming Budget.

Due to these challenges, disinvestment has been a priority for the Modi government. The act of privatising state-owned companies has been an innocuous means to garner revenue since Arun Shourie began pushing for it around 20 years ago. The move is generally a win-win as the government gets out of loss-making operations and also earns revenue while doing so. Historically, this has also been beneficial for the companies as shown by a 2017 study by the National Institute for Public Finance and Policy, which found that the weighted return on capital for privatised public sector enterprises rose from around 5 percent between 1999 and 2014 to 15 percent between 2010 and 2015 on an average.

Since its first full-Budget, the Modi government has been setting high disinvestment targets exceeding Rs 50,000 crores cash year and has also achieved them in the last two fiscal years. For FY20, the government had set a target of Rs 90,000 crore last February, which was revised upwards to Rs 1.05 lakh crore after it was re-elected – the highest in India’s history. However, as we near the Budget this year, the target seems too steep to achieve. So far, the government has managed to raise Rs 17,365 crore through disinvestment; leaving 84 percent of the target to be realised.

It is highly unlikely that the strategic sale of Bharat Petroleum Corporation (BPCL), Container Corporation of India (Concor), and Air India will be completed before the current fiscal year ends in March. Even though the first two entities are profitable businesses, their due diligence and valuation by potential bidders will be difficult to achieve in such a short time span.

Therefore, it is advisable that the government sets more realistic disinvestment targets for itself in this Budget so that the fiscal math is not affected towards the end. Moreover, the government should also look for productive means to enhance revenue instead of merely depending on disinvestment. Reviving the slowdown holds the key to boost its tax collections. But for that to happen, the fiscal strings with the government has its limitations as they are only helpful in cyclical slowdowns.

There are serious structural reasons for the current economic slowdown, which need structural remedies, some of which lay beyond the scope of the Budget. Disinvestment is one structural solution of getting the government out of operations that are loss-making and impede competition, but India needs further reform like those on the side of regulatory and administrative uncertainty. It is the first Budget of the new decade, and India should approach it with renewed thinking.

The article was published with Economic Times on January 17, 2020.