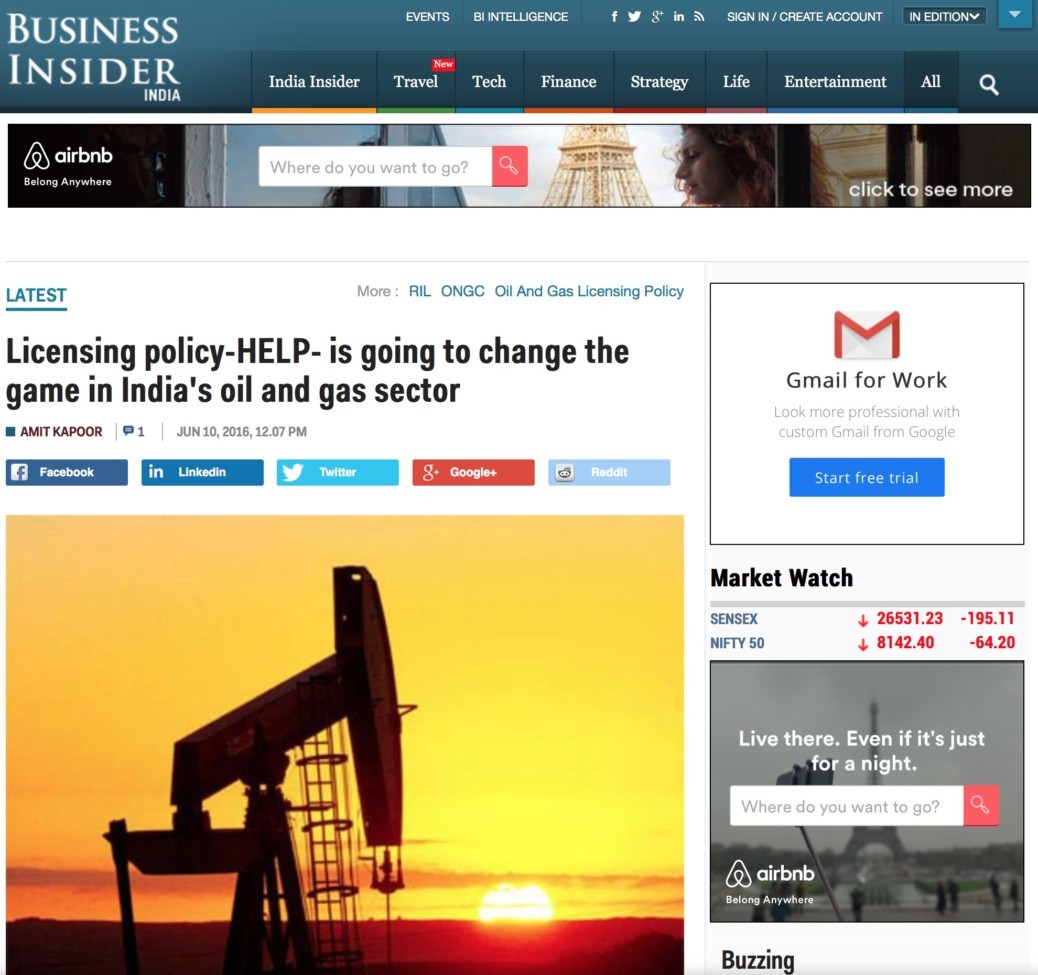 The clearance on the HELP (Hydrocarbon Exploration Licensing Policy) some time back is being hailed as a game changer for India’s energy sector . It is because India still imports roughly three-quarters of its oil (for domestic needs) from abroad as well as a third of domestic requirement of gas .

With the new policy being announced it is expected that this excessive dependence on oil and gas from abroad will reduce in due course of time. With this, the government is seen to streamline the processes that make resource allocation more transparent, accountable and efficient in India.

It follows from the way in which the coal auction process was streamlined by an e-auctioning system and discrepancies removed from the system. It is also evident from the proposal to incentivize commercial mining by giving private players a revenue share in the new mining exploration policy. HELP has three or four salient features, which can assist in strengthening India’s oil and gas exploration industry amid global turmoil. First, the policy is seen to be a natural extension of the experience of New Exploration Licensing Policy (NELP- of which nine rounds had been completed) initiated in 1997 and does away with many of the problems, which have arisen out of successive rounds of NELP.

For example, it does away with the profit sharing model between the government and the contractor and instead now looks to have a share of revenue. Doing so has two benefits. First, it helps reduce interference by the government to check the details of companies to ascertain costs and revenues and second it helps reduce the delays and disputes, which arise out of such contracts.

Second, the policy is also looking at an Open Acreage Licensing Policy (OLAP), which will allow Exploration, and Production companies like ONGC , RIL , etc. submit an Expression of Interest indicating the area where they wish to take up operationalisation of activities. Until now the exploration was confined to blocks that had been put on tender by government. This is where the move is seen as a positive step. Contracts will be on a ‘biddable revenue sharing’ basis, and bidders will be required to quote the revenue, which will be used for assessment of proposal in a transparent manner.

Third, another important distinction between HELP and NELP is that the policy promotes incentive based system for exploration in different areas. Most of India’s natural resources in oil are located in the deep water area, and this requires significantly different structure from the government side for exploration.

Finally, the policy does well to provide freedom to the contractors for pricing and marketing of crude oil. The policy has provisions for calculation of government revenue. For the purpose, it will be calculated as per the Domestic Natural Gas Pricing Guidelines (DNGPG).

However, in case the price of the find is greater than (DNGPG) in that case the government will calculate the price basis the actual price realised. The provision is seen as a measure to safeguard the revenues of government. Apart from these major steps, the exploration phase has also been increased to 8 years for Onland and Shallow water blocks while for Deep water, Ultra Deep water and Frontier blocks the exploration period has been increased to 10 years.

The policy is seen by the oil industry as a move that could end up creating a rules-based level playing field for E&P companies. Over the longer time frame, the policy will end up creating not just investment and employment but also seems to make India more competitive in exploration and production of crude oil and gas. The implementation it is hoped over the next decade will help India reduce its import dependence and help boost its energy security.

Published in Business Insider on June 10, 2016. To know more