Development potential of international migration needs to be tapped

Home Development potential of international migration needs to be tapped 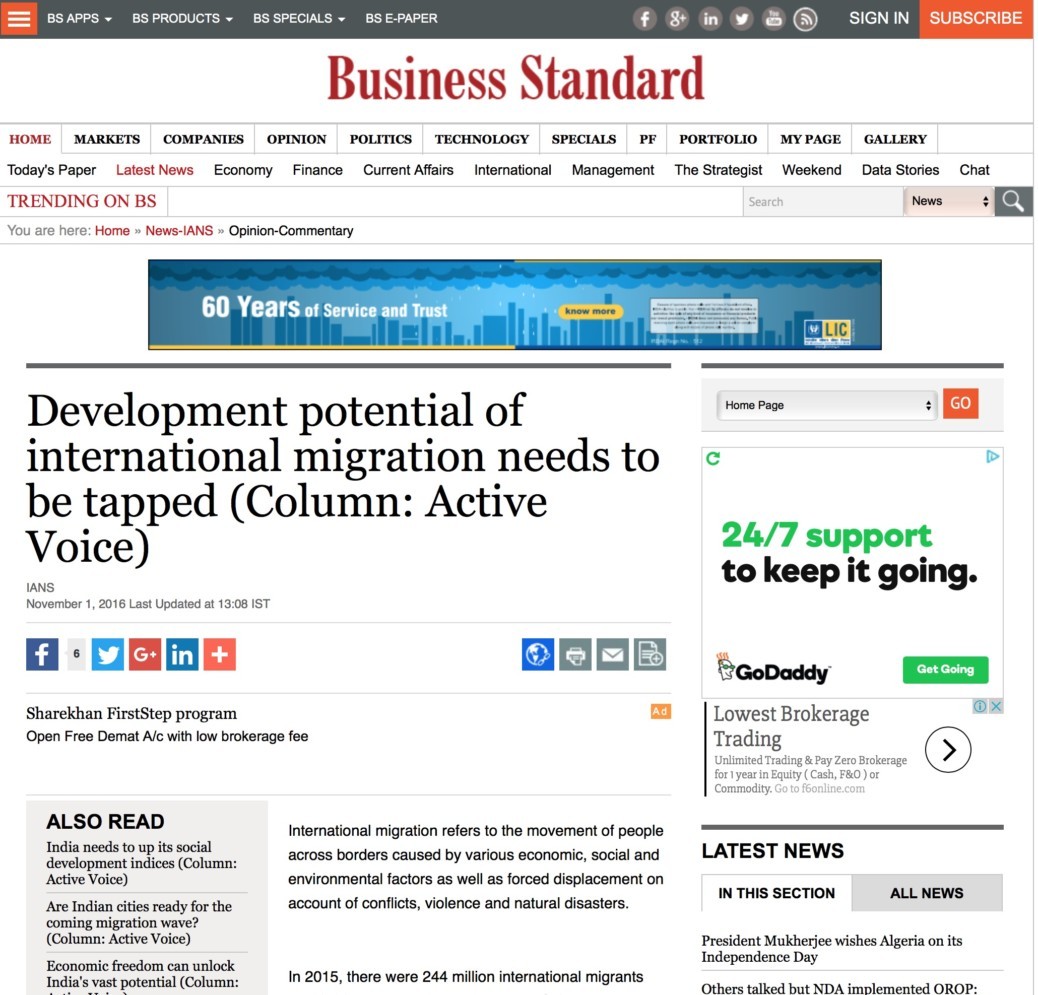 Development potential of international migration needs to be tapped

International migration refers to the movement of people across borders caused by various economic, social and environmental factors as well as forced displacement on account of conflicts, violence and natural disasters.

In 2015, there were 244 million international migrants worldwide, representing an increase of about 41 per cent in last 15 years. Further, the world is witnessing record levels of forced displacement, with 65.3 million people been forcibly displaced by conflict and persecution in 2015, out of which 21 million were refugees, 3 million were asylum seekers and over 40 million were internally displaced people (IDP) (International Migration Report, United Nations, 2015).

Moreover, about two-thirds of the migrant population were residing in just 20 countries, with the US hosting the largest number of international migrants (47 million), followed by Germany and the Russian Federation (12 million each) and Saudi Arabia (10 million). Further, 54 per cent of the refugees globally came from just three countries — Somalia, Afghanistan and Syria — and about a quarter of them resided in Turkey, Pakistan and Lebanon (International Migration Report, United Nations, 2015).

Recognizing the staggering increase in the migrant population worldwide, including the forcibly displaced people and the potential they carry in economic development, the UN’s 2030 Agenda for Sustainable Development includes a range of specific targets on migration, one of which is to facilitate orderly, safe, regular and responsible migration of people and pledges to “leave no one behind”, including refugees, IDPs and host communities.

Some of the other migration-related targets set in the 2030 Agenda include increasing the number of scholarships for studying abroad, eradicating human trafficking, respecting the labor rights of migrant workers, especially women and children, reducing transaction costs of remittances and providing legal identity to all migrants. Further, the UN aims to provide its data disaggregated by migratory status of the population, which shall be useful for ensuring its objective of inclusive growth included in the Agenda.

Amidst record levels of forced displacement experienced this year and the plight of refugees in the refugee hosting countries and within the country of origin, a high level UN Summit passed on September 19, 2016 the New York Declaration to enhance protection to the millions of migrants and refugees across the globe.

The Declaration calls for countries to transcend their national interests and come together to curb large scale suffering on a global scale. It intends to resolve some of the global challenges associated with human mobility such as sexual and gender based violence, practice of detaining children for the purpose of determining their migratory status, and the challenges faced by migrants in vulnerable situation such as unaccompanied children on the move.

The Declaration also calls upon the host countries to increase employment opportunities for refugee adults and for children to receive education within a few months of their arrival. Further, it aims to support the growing refugee population through greater relocation opportunities such as labor mobility and education schemes. Above all, it commits to protect the human rights of all refugees and migrants, including the rights of women and girls.

With migration, both voluntary and involuntary, now taking the centre stage as one of the defining global challenges faced today, it is important to respond to the rising xenophobia by extending hospitality and solidarity to the millions of asylum seekers and refugees across the globe along with strengthening the governance of migrating population to ensure safe, orderly and regular migration.

Moreover, the cost of providing development assistance to the millions of migrants and the refugees worldwide should be weighed against the long term development potential of the migrants for the host country and also for the country of their origin. Greater tolerance for migrants by bringing in favorable policy environment along with appropriate development investments in the countries most affected by them can bring about sustainable solutions to development.

The article was published in Business Standard on November 1, 2016. To know more