No easy choice for European leaders for Greece

Home No easy choice for European leaders for Greece 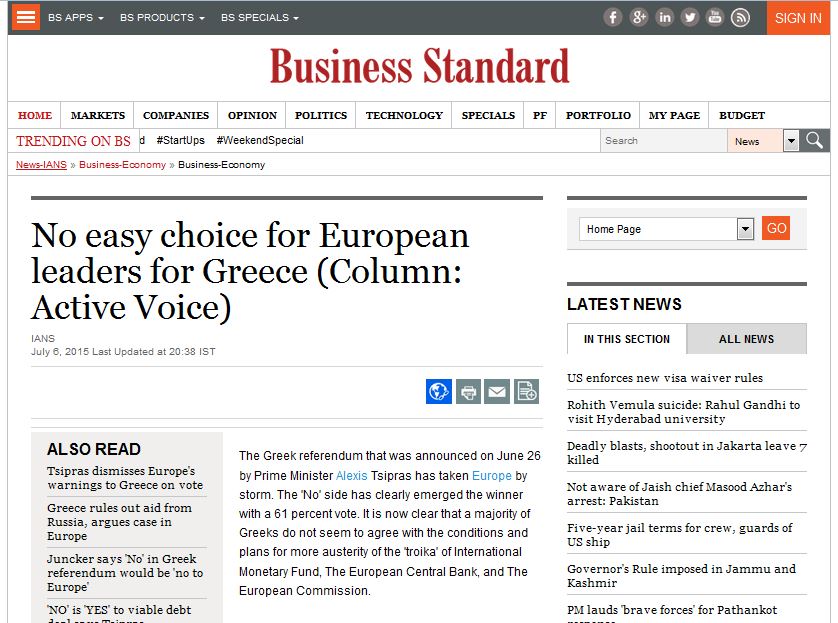 No easy choice for European leaders for Greece

The Greek referendum that was announced on June 26 by Prime Minister Alexis Tsipras has taken Europe by storm. The ‘No’ side has clearly emerged the winner with a 61 percent vote. It is now clear that a majority of Greeks do not seem to agree with the conditions and plans for more austerity of the ‘troika’ of International Monetary Fund, The European Central Bank, and The European Commission.

Four mock polls done before Sunday had also predicted this result with ‘OXI’ meaning ‘No’ winning by a small margin. Pandemonium has ensued after the results were declared earlier in the day with the Leader of Opposition and finance minister Yanis Varoufakis resigning. The markets have responded, taking a beating in China and Europe amid fears of ‘Grexit’.

Greece has had a long historical record of financial profligacy. A brief historical antecedent is helpful in understanding how Greece got here. In 1992 for entering the euro zone, Greece along with other several initial eurozone members, signed the Maastricht Treaty. A key point was the creation of a single currency the euro. For this, agreements were also made for convergence in economic policies of its members. The criteria primarily included a reduction in debt to GDP ratios to 60 percent of the GDP, deficits to reach close to 3 percent and inflation to be no higher that the lowest three inflation members.

These criteria led Greece to control and reduce its inflation, to little more than the euro area in 2000. Similarly, deficits were reduced. Greece’s debt to GDP ratios remained higher than 60 percent, but that did not prevent Greece from introducing the Euro in January 2002. Post-its introduction, borrowing costs plummeted as the euro was perceived to be a stable currency and investors saw the yield on Greek bonds almost converging with extremely creditworthy countries like Germany. It resulted in a spike in investment and GDP growth rates went up.

In 2008, post the global financial crisis, Greek growth faltered and this was accentuated by the 2009 announcement by the new government that the deficit levels were not 6 percent but a much higher 12.6 percent. All this resulted in a recession, with GDP falling dramatically since 2009. All this was followed by bailouts and ‘rescue packages’ by the troika that largely went to the creditor banks abroad rather than Greek people.

The result has thus been sustained economic misery (GDP down by 25 percent, an unemployment rate of 25 percent and youth unemployment of 50 percent). It has been brought to the present state of turmoil where capital controls are put (essentially meaning restrictions in taking out more that euro 60 a day from ATMs).

With the recent referendum, the ball is now in Eurozone members’ and creditors’ court. Immediate measures seem to be talks and negotiations between German Chancellor Angela Merkel and her French counterpart Francois Hollande. Both have agreed to meet in Paris to map out a future course of action in Greece.

European Commission head Jean Claude Juncker is also likely to discuss the matter with European Central Bank Head Mario Draghi and Jeroen Dijsselbloem, who heads the Eurogroup of euro-area finance chiefs on Monday. Talks are also due on Monday for the meeting of ECB Governing Council, which is likely to decide on what to do about the Greek lenders that are dependent on emergency funds.

Humanitarian aid might also just be considered to Greece as pointed out by European Parliament President Martin Schultz. Restructuring might happen but in what format remains to be seen. Thomas Pikkety, the French economist, has similarly pointed out in an interview that, in fact, Germany has not repaid a large fraction of the debts it inherited post World War-II. It thus has no ‘locus standi’ of lecturing other nations what to do. A conference on debt he opines like the one Europe had the War could bring about a likely solution to the problems facing Greece and many other indebted nations of Europe.

The fate of Greece critically depends at present on the 18 democratically-elected leaders and institutions of the eurozone. A likely ‘Grexit’ is quite possible now according to various analysts that could also potentially lead to more troubles for the Greeks who will probably have to go ahead with the earlier currency ‘drachma’. The risks of contagion though low, remain. However, things will become clearer once the emergency eurozone summit announced by European Union President Donald Tusk takes place on Tuesday. The geopolitical and security implications of the recent events could include talks of Greece with China and Russia, two countries that are eager for increasing their strategic influence within and near Europe.

Going ahead, it is left to the 18 leaders to decide what path they want to pursue. Do they set a precedent of negotiating and restructuring debts as Pikkety suggests or do they call for a ‘Grexit’? Either way the choice is not an easy one to make.

Published in Business Standard on July 6, 2015. To know more