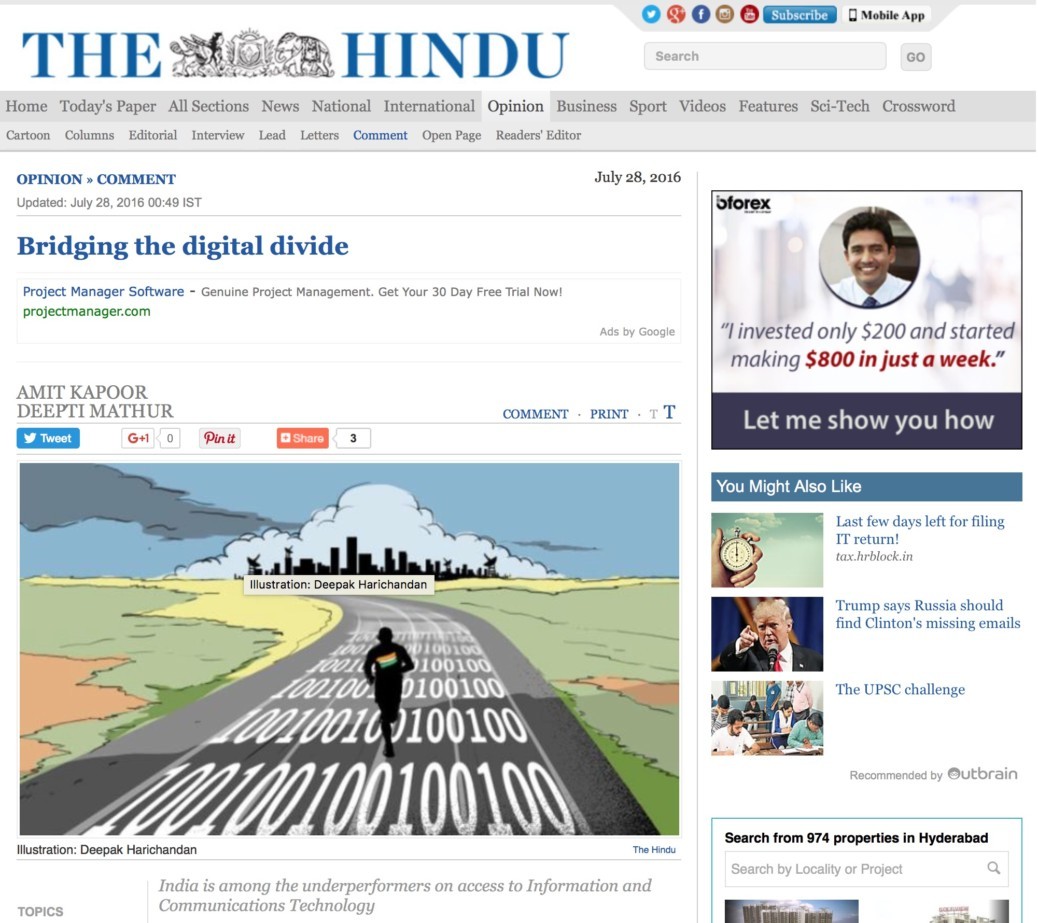 One of the parameters of assessing societal development of a country is the extent to which there has been penetration of information and communications technology (ICT) through the Internet, mobile phone subscriptions or through the degree of press freedom given to the journalists, news organisations and citizens of a country. Access to ICT also gains relevance in the newly adopted Sustainable Development Goals (SDGs) for 2030 of the United Nations, with greater relevance for the least developed countries to be able to provide universal and affordable access to the Internet to its people.
Over-performers, underperformers

Though ICT has promoted development across various dimensions of society from connecting individuals to spreading across businesses, and governments, there exists a digital divide in its accessibility between the high income and low income countries, with high income countries typically showing greater penetration of digital technology as compared to less developed countries. While in high income countries such as Finland, Norway, Denmark, Netherlands and Sweden, over 90 per cent of the population is using the Internet, in lower income countries such as Afghanistan, Sub-Saharan African countries such as Central African Republic, Ethiopia, Tanzania, and Malawi, less than 10 per cent of the population uses it. Similarly, with regard to the extent of mobile penetration, Sub-Saharan Africa has the lowest mobile penetration of 73 per cent, compared to 98 per cent penetration in high income countries (World Development Report 2016).
Given a high degree of correlation between the economic progress of a country and its access to ICT, there are countries which have over-performed relative to their economic peers in providing digital technology. One such country worth mentioning here is Costa Rica, which is the world’s top over-performer, known for its communication technology and also press freedom. Similarly, there are countries which have underperformed among their income peers on access to information and communication. For instance, Cuba, which has the lowest number of mobile phone subscriptions and lowest press freedom index, has been the most underperforming country on access to information and communication. Further, two of the world’s most populated countries — India and China — are also among the few underperformers on access to ICT. India, which has been appreciated globally for providing IT services, faces a huge digital divide, having a relatively low percentage of population with access to the Internet. In 2014, it had only about 18 people per 100 using the Internet (World Bank Data). China on the other hand has a very weak press freedom index, resulting in its overall low performance on access to ICT. Apart from the digital divide existing between countries, there also exists a gap in adoption of digital technology across different demographic groups within the country.

The World Development Report 2016 highlights such differences in accessibility to the Internet in Africa, where gaps arise out of differences in factors such as income, location, gender and age. For instance, greater access to the Internet is seen in the top 60 per cent of the population based on income distribution compared to the bottom 40 per cent. Further, women use less digital technology compared to men, and gaps are even greater between the youth (20 per cent) and the matured population (8 per cent).
Increasing access to ICT

To be able to promote greater social progress in the world, it is imperative to increase access to information and communication technology universally. With the world presently scoring 62.99 on a scale of 100 in access to ICT, higher overall social progress could be achieved by overcoming the digital divides that exist between the countries regardless of their level of economic progress.
One of the ways to bring about greater penetration of digital technology in society is to make it more affordable. This could be realised through support from multilateral organisations to the underperforming countries by helping them build their communication infrastructure. Moreover, promoting greater market competition in Internet provision and encouraging public-private partnerships in building ICT infrastructure could increase the affordability of digital technology and thereby improve access to it. Further, digital divides could be bridged to an extent by bringing greater awareness among citizens about the use of digital technology which could help in reducing information inequality in society.
While increasing penetration of digital technology by bridging the existing digital divides is associated with greater social progress of a country, it is also essential to build up the corresponding human capital necessary for making optimal use of the technology. ICT can benefit the economy through increasing productivity gains only if people having access to the technology also have the requisite skills for making optimal use of it.