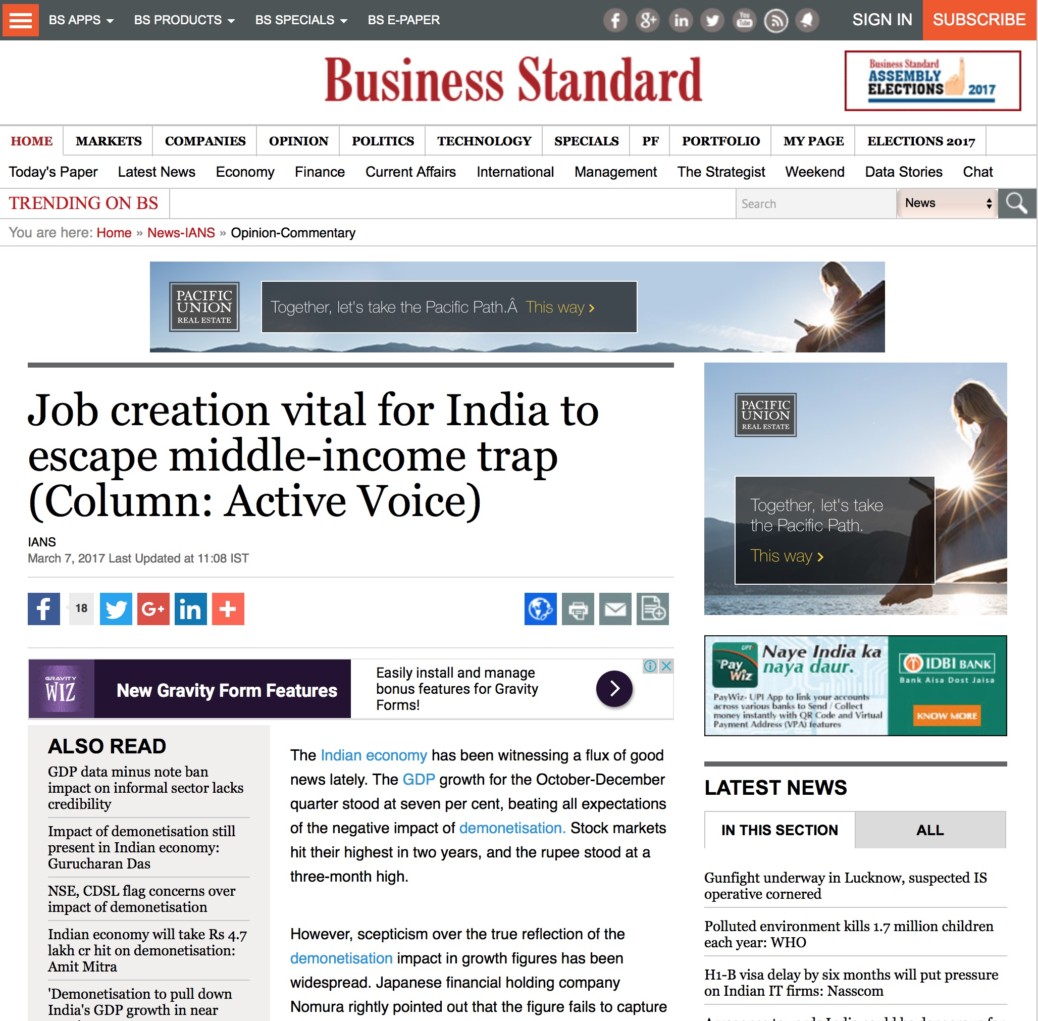 The Indian economy has been witnessing a flux of good news lately. The GDP growth for the October-December quarter stood at seven per cent, beating all expectations of the negative impact of demonetisation. Stock markets hit their highest in two years, and the rupee stood at a three-month high.

However, scepticism over the true reflection of the demonetisation impact in growth figures has been widespread. Japanese financial holding company Nomura rightly pointed out that the figure fails to capture the negative impact on the unorganised sector as it is largely based on organised sector data.

Nevertheless, obsession with GDP growth is a colossal fallacy in a country where the employment elasticity has fallen drastically from around 0.3 in 2007 to 0.15 in recent times. In simple terms, economic growth of one per cent leads to an employment growth of merely 0.15 percent. However, in a continuation of the spate of good news for the Indian economy, the country’s unemployment rate halved from 9.5 percent in August 2016 to 4.8 percent in February.

Therefore, regardless of the validity of GDP figures, jobs are being created in the economy. The government’s efforts to generate employment opportunities in rural areas seem to have been paying dividends. The MGNREGA explains quite a significant part of the 50 percent drop in unemployment. Households demanded/allocated work under MGNREGA has increased from 8.3 million to 16.7 million during the period.

Again, these figures need to be taken with a pinch of salt. First, a sharp decline in unemployment just before election season can be a short-term gain owing to populist tactics of the contesting parties. The fact that the sharpest decline in unemployment was registered in Uttar Pradesh – India’s most populous and politically significant state — validates this claim.

Second, it must be recognised that MGNREGA is not a long-term solution to India’s unemployment problems. The programme is a refined version of Keynes’ suggestion for the government to pay people to dig holes and fill them up during a recession. MGNREGA does the same to generate jobs for sustenance during periods of unemployment. The scheme does not solve the issue of employment but merely kicks the can down the road.

These figures also appear less worthy of celebration in the light of the ominous signs brewing on the horizon of the Indian economy. The first cause of worry arises from the protectionist stance of the newly-elected Donald Trump government in the US. In Trump’s first address to Congress, he re-asserted his intent on increasing import tariffs.

Almost 16 percent of Indian exports are to the US, which is higher than any other country in the world. Therefore, India’s export sector is bound to lose jobs if Trump’s plan materialises. Moreover, a bill has been introduced in the US Congress to penalise companies that outsource call centre services overseas by making them ineligible for government grants and loans. Such a move will have a huge negative impact on the IT and business process outsourcing (BPO) jobs in the country as the US accounts for 62 percent of exports in the sector. The trend has already begun as the sector lost around 16,000 jobs in the July-September period last year.

The second cause of concern is a looming jobs crisis in three leading service sectors of the country — IT, telecom and BFSI (banking, financial services, insurance) — due to domestic dynamics. Automation is the biggest threat to jobs in India as recently pointed out by Infosys’ Vishal Sikka.

The impact might not be felt immediately but can become a real cause for concern in a few years as Moore’s law takes its toll. The IT sector will be the most affected due to automation. On the other hand, consolidation of the telecom and BFSI sectors will result in further job losses. Both the industries are maturing at an unprecedented pace as big mergers take place. Such mergers, like that of Vodafone and Idea, will result in economies of scale and, hence, a lower workforce requirement.

The underlying reasons for the drastic fall in unemployment across the country and the dismal prospects of job creation in the future give us no reason to be euphoric about the litany of positive economic signals that are being received lately. On the contrary, the above-cited factors call for a serious effort to create jobs that are sustainable in the long-run and can cope with the rapidly-changing trends in the global and domestic economy.

To begin with, India needs to focus on policies that link GDP growth with job creation so as to improve employment elasticity. Such a link is highest in the manufacturing sector. Reviving manufacturing growth can be the key to the country’s perpetual problem of jobless growth. This can be brought about with a policy focus on the growth of small and medium enterprises (SMEs). During 2005-12, 70 percent of job growth in India came from SMEs. The budget for 2017-18 has proposed tax breaks for MSMEs to enable their growth. However, more structural reforms in its factor markets are called for, along with a streamlining of regulations.

An integrated action plan to tackle the issue of job creation is necessary to get India out of the middle-income trap. Any sense of complacency and self-appreciation in the government due to the seemingly positive economic outcomes can be inimical to the country’s interest in the long run; a long run in which we won’t be dead enough to escape the misery.

The article was published in Business Standard on March 7, 2017.