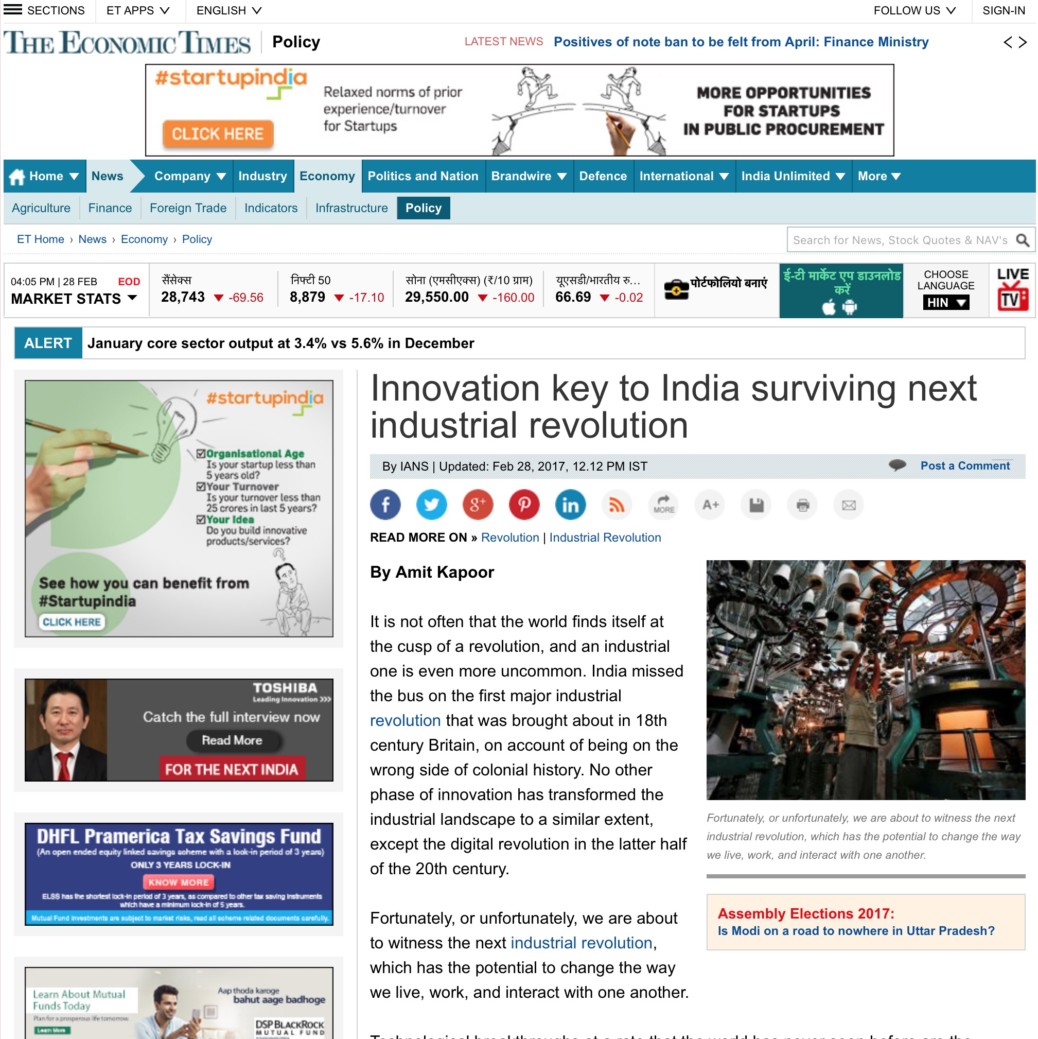 It is only so often that the world finds itself at the cusp of a revolution and an industrial one is even uncommon. India missed the bus on the first major industrial revolution that was brought about in 18th century Britain, on account of being on the wrong side of colonial history. No other phase of innovation has transformed the industrial landscape to a similar extent, except the digital revolution in the latter half of the 20th century. Fortunately, or unfortunately, we are about to witness the next industrial revolution, which has the potential to change the way we live, work, and interact with one another.

Technological breakthroughs at a rate that the world has never seen before are the defining characteristics of the latest revolution. This has been witnessed in various fields like artificial intelligence (AI) , robotics, the Internet of Things, 3-D printing, autonomous vehicles, nanotechnology and other similar technological innovations.

The implications of the oncoming revolution have been a topic of heated debate, especially in the developed world. The impact of robotics and AI on job creation is increasingly becoming a cause for concern. Recently, physicist Stephen Hawking warned that automation of factories would make traditional manufacturing jobs irrelevant while the advent of AI will destroy cut deep into the middle classes.

Last week, Izabella Kaminska argued in a thought-provoking piece that recent innovations will displace high-paying skilled jobs, instead of menial jobs, since it would be more cost effective for corporates. Bill Gates suggested that robots should pay an income tax for the negative impact they might have on employment. On the other hand, Silicon Valley entrepreneurs like Elon Musk favour the idea of a Universal Basic Income (UBI) to tackle the looming threat of job losses.

However, developing countries seem indifferent to the ongoing debate as if the issue were merely a first world problem. On the contrary, if either automation displaces mundane jobs or A.I. takes away more skilled jobs or both, employment in developing countries will take a major hit. In fact, a recent UN report claimed that as manufacturing is increasingly undertaken by industrial robots, developing countries could lose about two-thirds of all jobs.

Underlying this reassurance are, in fact, a few causes of grave concern for a developing economy like India. First, the Indian economy is only services-led in terms of growth. Only about 30 percent of the population is employed in services, within which only a tiny proportion is employed in jobs that artificial intelligence might find hard to displace.

Second, it might just be a misnomer that AI will never be able to develop “real intelligence.” Google has managed to develop AI that can respond to a piano player with its own set of notes based on various melodies it has learned. Self-learning AI can easily display human traits and put even creative jobs at risk.

Third, Nadella’s remark on the creation of new jobs as a result of the destruction of old ones is based on the time-tested Schumpeterian logic. However, the question that India should concern itself with is the place where these new jobs would emerge. During the first industrial revolution, Britain managed to shift the job losses to its colonies with its machine-produced goods. Similarly, in current times the US is the centre of research and innovation, and American companies that are at the forefront of the technological revolution can as easily export unemployment as they had exported jobs to countries like India.

Mark Zuckerberg’s recent 6000-word manifesto on the future that he imagines for the world exposes the danger that arises from an American-centric technological revolution. He envisions that the next step for humanity is the creation of a global community in which Facebook can act as a facilitator. Such a world is not hard to fathom, and the “global community” can never find a better platform than Facebook since everyone is locked on to it and shifting to an alternative makes little economic sense. Therefore, in a technology-dominated world, American-centrism can only imply fewer jobs for developing economies.

The US owes Apple and Google to the world-class corporate labs that the country invested in during the last century. The country funded high-risk, long-term research projects and succeeded in heralding an industrial revolution. India needs a similar approach if it intends to survive the next one.

The article was published with Economic Times on February 28, 2017.