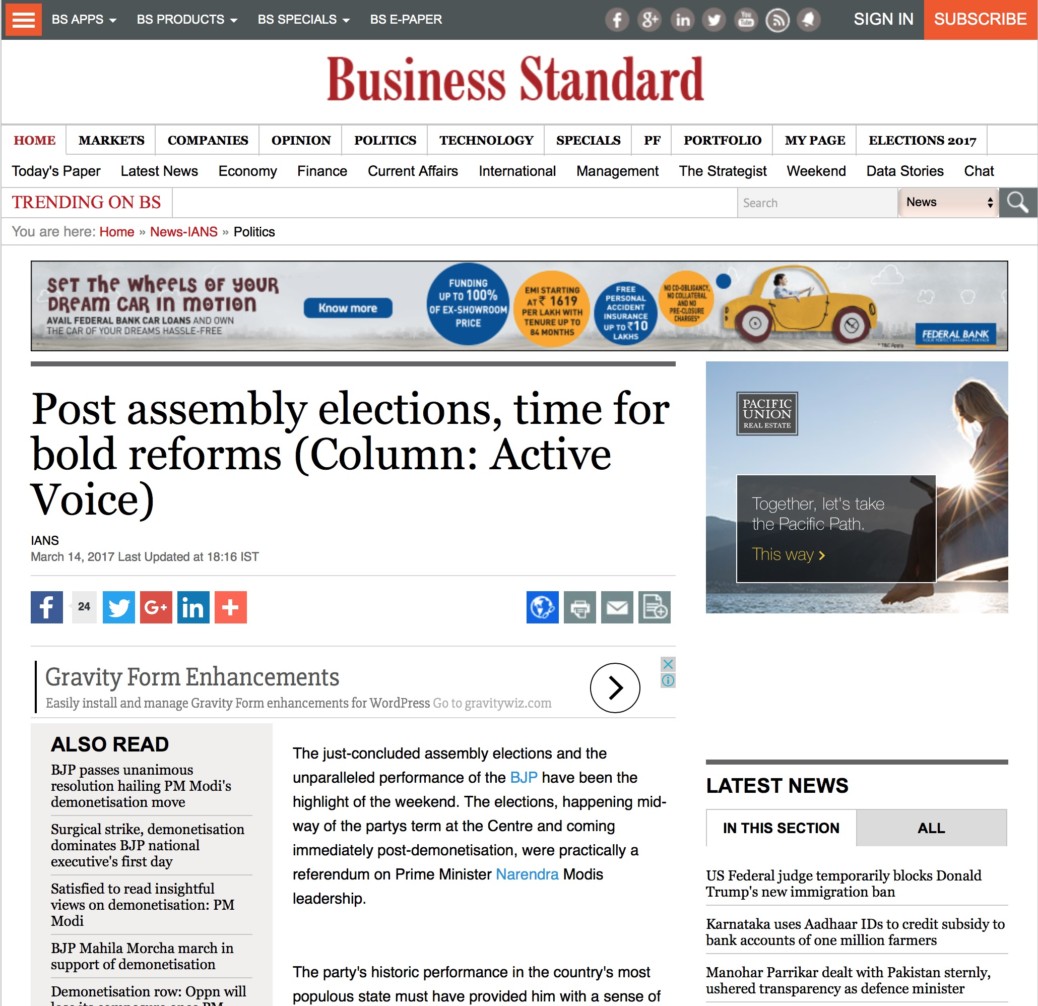 The just-concluded assembly elections and the unparalleled performance of the BJP have been the highlight of the weekend. The elections, happening mid-way of the partys term at the Centre and coming immediately post-demonetisation, were practically a referendum on Prime Minister Narendra Modis leadership.

The party’s historic performance in the country’s most populous state must have provided him with a sense of vindication and confidence after months of criticism for his bold demonitisation gamble on November 8, 2016. However, the implications of these election results lie far beyond the states and the party. The economy has much to gain or lose depending on the course policy-making takes from here onwards.

The magnitude of support shown by voters for the BJP in the states leaves it with a high possibility of being re-elected in the 2019 general elections. The current electoral performance also ensures the party a majority in the Rajya Sabha by 2019, which has been a major hindrance for any productive functioning of the Parliament off late. A sense of continuity and political stability is the best outcome that the nation could have hoped for in times of global uncertainty. The election results act as a positive signalling mechanism for multiple stakeholders in the economy.

First, political stability begets economic stability. An assurance of continuity in government policies sends out a positive signal to foreign and domestic investors about the country’s economic scenario. No sudden policy shocks to the economy are generally expected to take place in such a situation like the ones taking place in the US right now with the repeal of Trans-Pacific Partnership (TPP) and Obamacare. This will also ensure a continuity in the functioning of GST, which is expected to be inflationary in its initial years of implementation and can become an electoral issue in 2019.

As the world moves towards uncertain protectionism, an economy with a stable political regime and sound economic policies that is welcoming to foreign investors can be a beacon of hope. It can also go a long way in reviving the subdued domestic investor sentiment. Although, the latter will also require bold reforms to deal with the problem of bad debts.

This brings us to the second point. The confidence instilled by voters in the party can encourage it to bring about a slew of bold reforms that political parties have been holding back for decades due to the fear of losing political ground. To begin with, the long-standing call for labour reforms can be addressed. Such a move will complement the government’s intent on improving the ease of doing business and also inspire investor confidence. Additional Measures can include reforming the direct tax code, introducing a Uniform Civil Code and privatisation of white elephant PSUs. An opportunity to make such radical policy changes that have significant long-term benefits come rarely. The Modi government can do well to capitalise on it.

The third significant signal: The Indian vote bank has been infamous for catering to caste politics. Uttar Pradesh has been the epitome of such electoral practices owing to its varied population distribution. On the contrary, in the current elections, the voter base seems to have responded to practical calls for development rather than to an emotional connect of erstwhile rulers of UP’s political corridors.

The change in voting behaviour highlights two important points. The obsession with caste is losing importance at the ground level, and it is the time that the media and political parties recognise this fact and follow suit. Second, the shift to focus on development signifies the rising aspirations of the Indian population and their rising demand for more jobs and opportunities, which has been promised to them.

This is an area that the government has been unable to improve upon along with restoring investor confidence in the country. Now, with a significant portion of north and west India under its belt, cooperation between the Centre and the State and coordination between their policies will be much achieved easily. This is much more true in the case of BJP than it was for earlier ruling parties at the Centre since the state Chief Ministers will recognise the contribution that the Prime Minister has had in their electoral wins and will be wary of resisting any policy suggestions from PMO. Therefore, materialising voter aspirations by improving investor confidence, which will already be given a boost owing to the current political scenario, should be on top of the government’s agenda. It now has considerable power to act upon this.

The article was published in Business Standard on March 14, 2017.