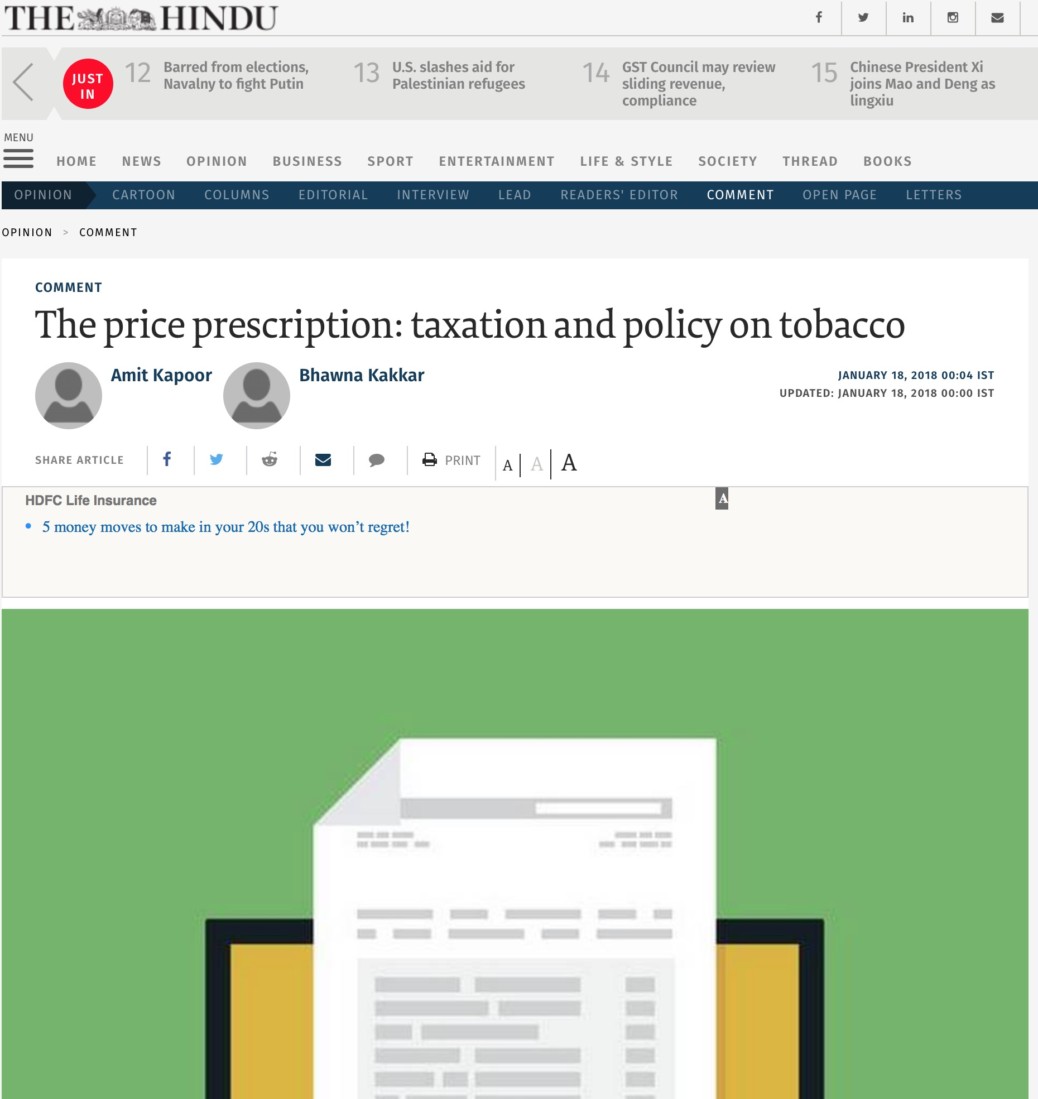 Post-GST, we need a more targeted taxation and retail policy on tobacco products

India is the second largest consumer and producer of tobacco-based products — categorised as sin goods or demerit goods — and it has become imperative for policymakers to devise measures to effectively curb their use. Over the years, governments have resorted to a mix of policies which range from monitoring the pricing and taxation regime of these products to the focus gradually shifting towards awareness campaigns highlighting the deadly effects of tobacco use, regulatory control laws pertaining to packaging and labelling as well as shaming and prohibiting its use in public places.

The Supreme Court recently stayed a Karnataka High Court order setting aside the 2014 amendment rules to the Cigarettes and Other Tobacco Products (Prohibition of Advertisement and Regulation of Trade and Commerce, Production, Supply and Distribution) Act, 2003 that prescribed tobacco packages having pictorial warnings covering 85% of the package space. This is in contrast to the High Court order that viewed the 2014 rules violating constitutional norms as being an “unreasonable restriction” on the right to do business and earn a livelihood. The High Court also held that there seemed to be no connection between the images and the warnings. The Supreme Court observed that the “health of a citizen has primacy”. Though this is one approach to bring about behavioural changes towards tobacco use, placing barriers to its consumption also calls for appropriate pricing policies, for which taxation measures must be at the forefront.

For this, it is necessary to first understand the nature of its product variant structure. The World Health Organisation’s Global Adult Tobacco Survey (GATS 2016-17) highlights India’s distinct pattern of tobacco consumption in multiple forms such as cigarettes, bidis, chewing tobacco and khaini (smokeless tobacco) — in contrast to the global trend of cigarettes being the primary source of consumption. In India, bidis, chewing tobacco and khaini form 89% of consumption as against 11% for cigarettes.

What explains such a skewed pattern? If we look at the competitive dynamics and pricing, a key reason for such disparity is because it is based on the unit-level pricing of multiple forms of tobacco. The average unit price of a bidi or smokeless tobacco is significantly lower than of a cigarette. Therefore, the former is a cheaper source for consumers who are mostly from the low-income segment of society.

The nationwide implementation of the goods and services tax (GST) has not improved the situation either. All tobacco-related products have been placed in the 28% tax slab. Additionally, a National Calamity Contingent Duty (NCCD) and a cess charge have been imposed on cigarettes and smokeless tobacco. The pre- and post-GST impact on prices of tobacco-related products is useful in the context of pricing multiple forms of tobacco products in India. Except for a price drop in the smallest pack size of bidi, there has only been a marginal rise in the price of bidi for other pack sizes after the roll-out of the GST. Further, the price of an average bidi pack has been increased by 20 paise.

In comparison, the price rise post-GST is much higher for cigarettes. The average increase in pack price has been the highest for the economy pack followed by the premium and mid-priced packs. If we consider other tobacco-related variants such as smokeless tobacco and pan masala, their pricing trends move in the opposite direction with respect to pack sizes. In the case of smokeless tobacco, the maximum price increase has been in the smallest pouch size category (less than 2 grams) whereas an increase of only 10-20 paise per pack has been observed across other pouch sizes. Pan masala, on the other hand, has shown a decline in post-GST prices for smaller pouch sizes and a rise for larger pouch sizes.

Therefore, one may be able to postulate that the GST roll-out has not had much of an impact either on the pricing of various tobacco products or in reduction of the vast disparity between its different variants. The impact has been negligible in the case of bidis.

The revisions in the taxation policy concerning tobacco products should ideally have a mix: of a removal of all excise and other tax exemptions irrespective of the size of the unit, restrictions on sales of loose sticks and raising taxes/duties on bidis and smokeless tobacco by a significantly higher level to narrow the gap between the price of bidis and smokeless tobacco vis-à-vis cigarettes keeping in mind the increased probability of health-related issues among low-income poor households and the health-care burden.

The article was published with The Hindu on January 18, 2018.