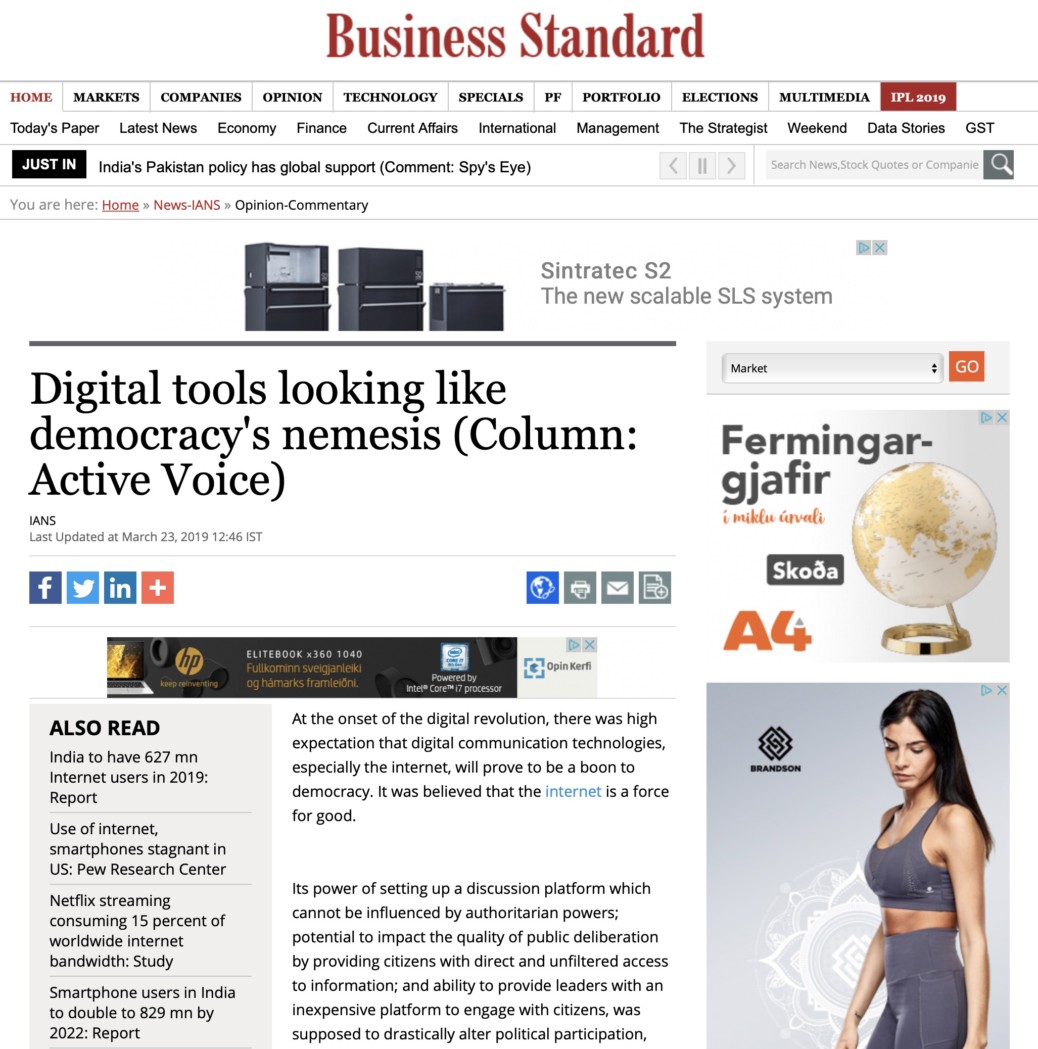 At the onset of the digital revolution, there was a high expectation that digital communication technologies, especially the internet, will prove to be a boon to democracy. It was believed that the internet is a force for good. Its power of setting up a discussion platform which cannot be influenced by authoritarian powers; potential to impact the quality of public deliberation by providing citizens with direct and unfiltered access to information; and ability to provide leaders with an inexpensive platform to engage with citizens, was supposed to drastically alter political participation, democratic governance and lead to growth of democratic regimes.

The evolution of these communication tools, as expected, did prove to be a democratizing force in some cases. For instance, social media platforms enabled powerful demonstrations that played a major role in the downfall of oppressive regimes in Libya, Tunisia and Egypt. It also helped by providing the disenfranchised a voice and a way to participate in politics without joining political party, attending meetings or visiting political offices. For instance, citizens all over the world have the power to bring their issues to light by organising online campaigns for policy change.

However, during the last decade, the negative aspects of the digital tools have become apparent. There hardly goes a day without the allegations that digital tools are undermining democracy. The research by scholars shows that digital techniques are being used to promote particular candidates or political parties; to enflame social tensions; and to spread fake news. There are three ways in which influencers use digital tools to impact political participation as well as outcomes of democratic decision-making process.

First, spreading fake news by conducting active disinformation campaigns. The problem has evolved as greater access to information has not been accompanied by digital literacy programs to educate citizens how to discern genuine from fake news. The primary digital techniques used to publicise misinformation are “bots” and “sock – puppets.” Bots are algorithmically driven computer programs designed to do specific tasks online. They are used by political parties or campaign teams of candidates to rebroadcast content i.e. dampen or amplify messages. Sock-puppets are human-operated fake accounts, that are used for the same purpose of spreading misinformation. In addition to amplifying messages, they are used to reply to other social media accounts as the credibility of sock-puppets is higher than bots. The gravity of problem of misinformed citizens, is higher than that of uninformed citizens, as the misinformed citizens are committed to their untrue beliefs. The news is filled with examples of fake news.

Second, cyber-attacks on databases. The theft and publication of government’s and political party’s private data has become a common form of digital interference during elections. These cyberattacks, based on the motive, can be categorised in two groups. One, the attackers, motivated by public interest, leak materials that expose wrongdoings of political parties or candidates. Two, the attackers leak information to advance personal interest, rather than public interest. For instance, they publish data about their political opponents or the political parties they oppose. The value of hacked data is very high, given it is only available to police or intelligence agencies and hence such leaks have high political consequences. Examples of such attacks include leaking hacked data of seven key members of Democratic National Party (U.S.) in 2016 that caused reputational harm and leaking of email trails and documents belonging to campaign team of Macron two days before 2017 French presidential elections. Apart from data breaches, tampering with voting machines, voters list and databases that are integral to the voting process also threaten election integrity.

Third, using big data and micro targeting techniques. In recent years, the world has experienced an exponential growth in data accumulation and processing. This rise in data accumulation, has made micro-targeting easier, compared to the pre-digital era. The influencers use algorithms to identify their target population and disseminate messages to them by using social media. These messages, that shape the political opinion of target population, have a significant impact on the electoral outcomes. A prime example of the use of big data to influence voters is the Brexit referendum. The leave party was assisted by companies that helped them micro-target advertisements and manipulate the behaviour of voters.

These examples are reflective of the idea that democracy is under digital attack. The digital communication tools, that were once expected to make democracy more resilient, have started to look more like democracy’s nemesis. India is no stranger to these issues. Social media has become a hotspot for spread of misinformation and mischief in India as evidenced in infamous episodes of mob lynching across the country. With general elections less than a month away for the world’s largest democracy, it is critical that digital mediums are not misused.

The article was published with Business Standard and Outlook India on  March 23, 2019.