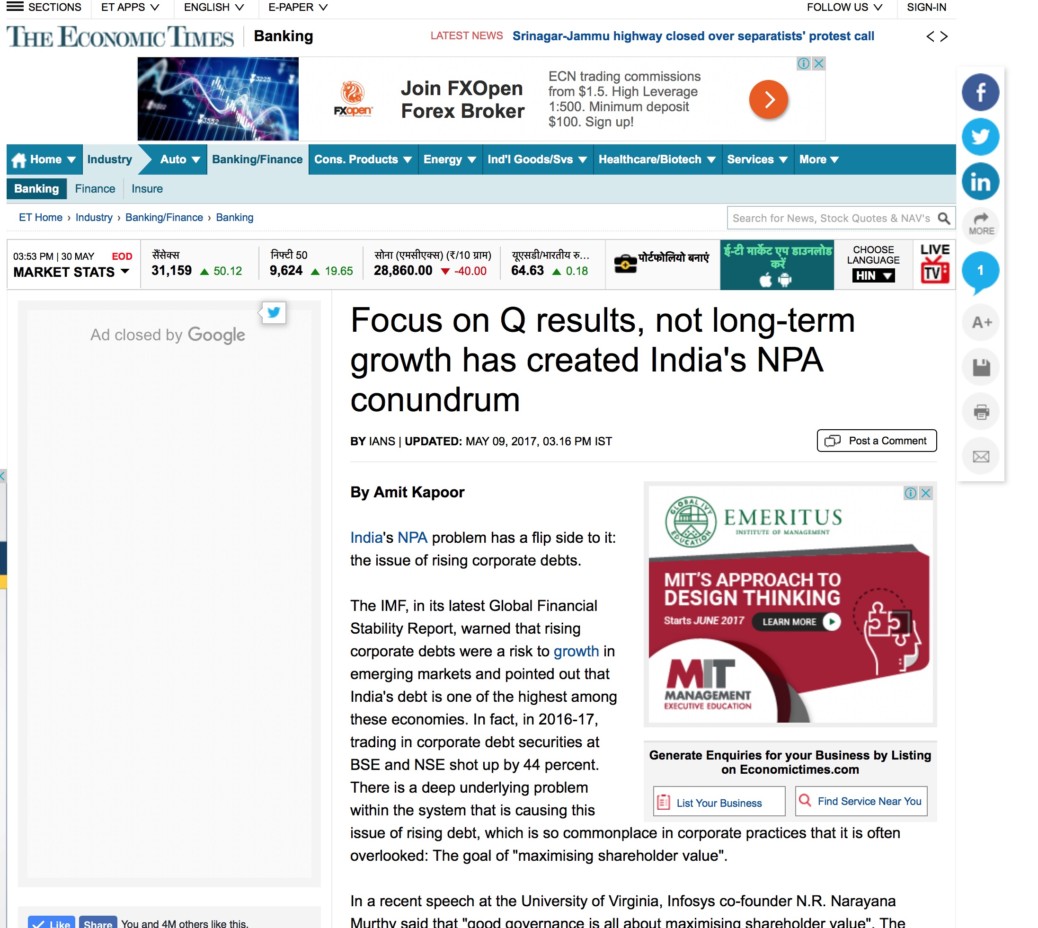 India’s NPA problem has a flip side to it: the issue of rising corporate debts. IMF, in its latest Global Financial Stability Report, warned that rising corporate debts were a risk to growth in emerging markets and pointed out that India’s debt is one of the highest among these economies. In fact, in 2016-17, trading in corporate debt securities at BSE and NSE shot up by 44 percent. There is a deep underlying problem within the system that is causing this issue of rising debt, which is so commonplace in corporate practices that it is often overlooked: the goal of “maximising shareholder value”.

In a recent speech at the University of Virginia, Narayana Murthy said that “good governance is all about maximising shareholder value”. The statement was not always passed around as truism till a few decades ago. The phenomenon first arose in the developed world and India merely imported these corporate practices.

In the immediate post-war era, the role of shareholders was restricted and the managers of large corporations enjoyed relative autonomy. The financial sector was strictly regulated and limits were imposed on the movements of capital. The corporations tended to retain the profit they earned and the people they employed, and they reinvested this profit in accumulating physical and human capital.

In the 1960s and 1970s, this strategy of “retain and reinvest” hit a roadblock due to a massive growth of corporations. Through mergers and acquisitions, corporations grew too big with too many divisions in different kinds of businesses. Following this, there occurred two institutional changes that aligned the management’s interests with that of the shareholders’: development of new financial instruments like junk bonds and tender offers that allowed hostile takeovers and changes in compensation of managers who were offered performance related pay schemes and stock options.  The 1970s also witnessed the financial and banking deregulation of the American economy, which would help the hostile take-overs in the next decade by allowing the risky trade in junk bonds – a corporate or government bond that the bond-rating agencies consider being below ‘investment grade’.

Managers responded to the ‘shareholder revolution’ by a marked shift in their strategy. Lazonick and O’Sullivan famously wrote in 2000 that, “In the name of creating ‘shareholder value’, the period following the hostile takeover movement, witnessed a marked shift in the strategic orientation of top corporate managers in the allocation of corporate resources and returns away from ‘retain and reinvest’ and towards ‘downsize and distribute’.”

Under the new regime, top managers downsize the corporations they control, with a particular emphasis on cutting the size of the labour forces they employ, in an attempt to increase the return on equity. It has been empirically shown that “reduction in force” announcements have a positive effect on share prices. Rational pursuit of these managers led them to do whatever they could to keep the stock prices up and the shareholders happy. There was a rise in dividends paid out to shareholders and repeated stock buy-backs to reduce the supply of shares in the market and artificially prop up their prices.

The shift towards shareholder value orientation of firms has resulted in a short-term strategy of boosting share prices rather than a focus on long-term growth of the firm with real investment for non-financial firms. Indian firms also began pursuing this self-destructive strategy, which ties to the corporate debt problem that they are currently facing and eventually to the country’s ever-widening NPA crisis.

During the boom years of 2004-08, India’s corporate profit as a percentage of GDP rose from 4.5 percent to 7.1 percent, as per RBI data. Post-crisis, profits immediately started falling, eventually reaching 4.5 percent in 2014. However, between 2004-14, corporate debt-to-equity ratio consistently rose from 0.68 to 1.1. In value terms, corporate debt rose by 8.1 times while net profit had merely climbed 3.2 times.

It is quite clear that the debt was not being taken for productive purposes. On the contrary, despite troubling times, Indian corporates were generously handing out dividends. Between 2011-16, the country’s top listed companies had tripled their dividend payments while their profits rose by merely fifty percent. They were quite honourably sticking to Murthy’s idea of good governance.

This is not to argue that shareholders are not an important constituent of a firm, but the obsession with such a metric creates the wrong incentives for managers. They are forced to focus on boosting quarterly results rather than enhancing long-term growth; and satisfying shareholder needs rather than those of its customers and employees. Today, Indian firms are burdened with unmanageable corporate debt due to such misaligned goals. Firefighting the NPA issue will not help the economy in the long-run if inherent corporate practices maintain status quo.

The article was published with Economic Times on May 9, 2017.