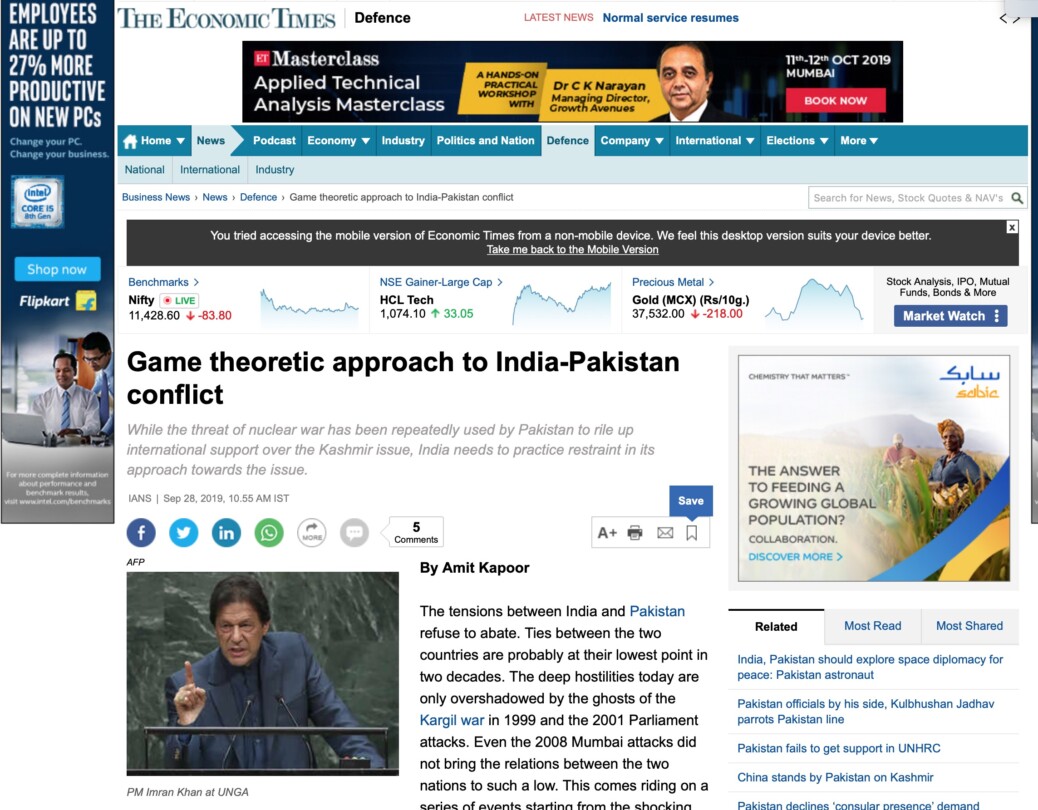 The tensions between India and Pakistan refuse to abate. Ties between the two countries are probably at their lowest point in two decades. The deep hostilities today are only overshadowed by the ghosts of the Kargil war in 1999 and the 2001 Parliament attacks. Even the 2008 Mumbai attacks did not bring the relations between the two nations to such a low. This comes riding on a series of events starting from the shocking Pathankot attack (2016), Uri attack (2016), Amarnath Yatra Attack (2017) to the recent Pulwama attack (2019). As a result, the leaders of the two nations have not met since 2015.

The matter reached a crescendo when India abrogated Article 370, which ended the special status that had been accorded to Kashmir and brought it under central control. Even though the matter is a domestic issue for India, Pakistan has made concerted efforts to internationalise the issue. Imran Khan even went on to appeal to the international community through The New York Times for wider involvement over the issue arguing that a “threat looms over the world … under a nuclear shadow.” The developing animosity does not seem to be nearing its end anytime soon.

While the threat of nuclear war has been repeatedly used by Pakistan to rile up international support over the Kashmir issue, India needs to practice restraint in its approach towards the issue. The gains from peace far exceed the returns from adopting a belligerent stance. In this regard, the idea of reconsidering India”s no first use (NFU) posture on nuclear weapons is quite problematic. This can be understood from a game theoretic viewpoint.

What remains of utmost importance is whether India should revoke its no first use policy or not. This question can be answered using a classic example of a “Prisoner”s dilemma.” The game involves two players – India and Pakistan, each having two sets of strategies to choose from, i.e. to launch a nuclear attack (called “attack”) or not to attack. If only one country attacks, the attacker receives a positive payoff, and the opponent gets a negative one. Fixing the strategy of other players as attack or not attack, attacking will always give the maximum payoff to each. Therefore, the dominant strategy of each player is to attack, which is the only Nash equilibrium in the game.

However, both the players would be understandably better off by choosing not to attack at all. Their overall payoff would be higher than the dominant strategy Nash equilibrium. Hence, reconciling their differences and not attacking can indeed provide higher gains to both. This is so because the country attacking first might have first-mover advantage, but it would be followed by a series of counter strikes and eventually both would receive negative payoffs. Thus, even though both countries have a dominant strategy of attacking each other, both would be better off by cooperating.

The NFU policy acts as an assurance for Pakistan that India would not attack first, which allows it to choose the strategy of not attacking. If India abandons the policy, then it brings an element of uncertainty into the game. In such a case, when there is a deterioration in ties the next time, Pakistan will be uncertain of India”s actions. And given the history of wars that both countries have fought, Pakistan would be skeptical of winning a conventional military strike.

So, the best strategy for Pakistan would be to use nuclear weapons at the very beginning. Uncertainty in such case would indeed act as a catalyst in a nuclear strike from Pakistan”s end. This is because Pakistan will be afraid of India”s possible actions. If India uses its nuclear weapons, it will in all likelihood destroy its neighbour”s nuclear capabilities. Fearing that if such a situation arises, the chances of Pakistan losing the war using conventional force would be extremely high, the country will strike first.

Thus, ambiguity is likely to escalate the chances of a nuclear war. The NFU policy is a tool to ensure peace in the region and should not be abandoned. If India sticks to its no-first-use policy, Pakistan”s best response should also be to not attack. The policy ensures that the countries do not gravitate towards the Nash equilibrium where both countries attack each other. It acts as a deterrent that forces both countries to remain at the Pareto superior condition of not attacking where both of them are better off. This game theoretic model also shows that if India asserts its commitment to NFU, Pakistan would choose to attack in spite of its warmongering. Pakistan would be fully aware of the repercussions that would follow if it attacks India. Apart from destruction, the fear of a social boycott by the world would also be a deciding factor for Pakistan. Thus, calmer heads should prevail in such times instead of a needless engagement in a futile standoff.

The article was published with Economic Times, Outlook India and Newsd.in on September 28, 2019.