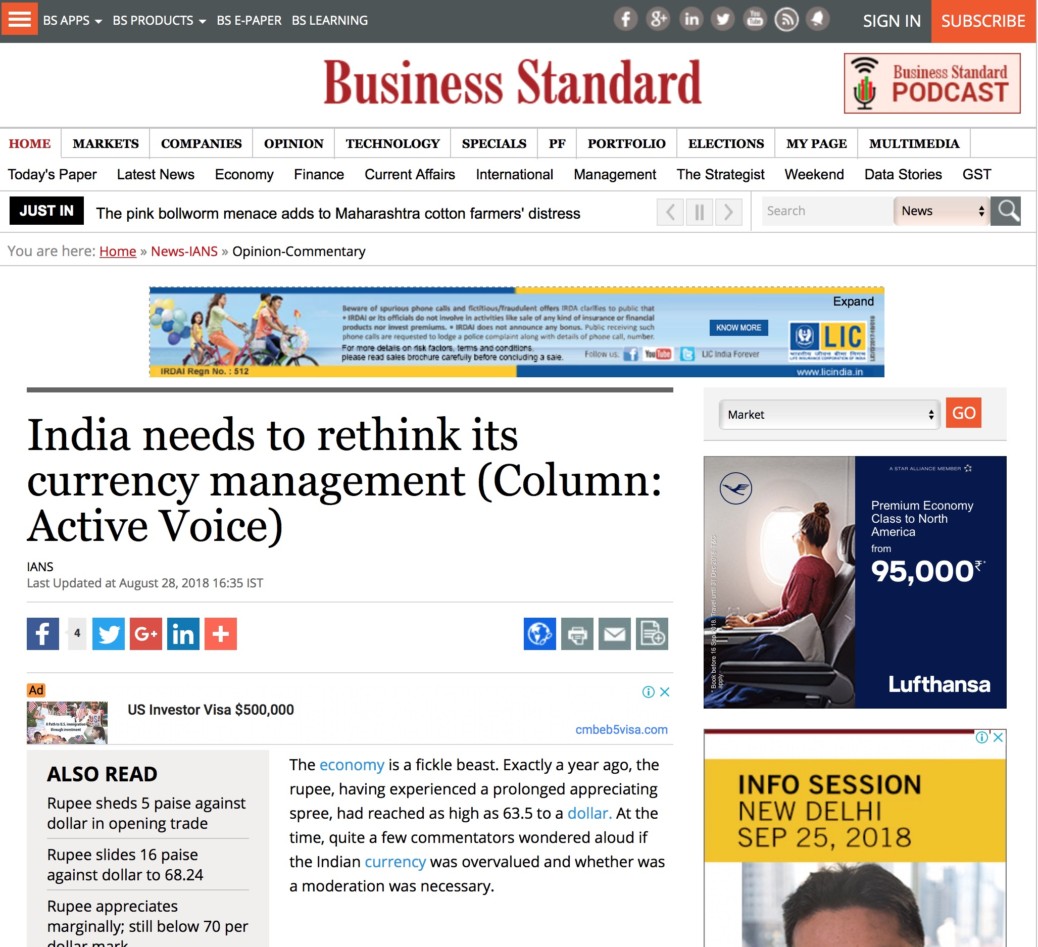 The economy is a fickle beast. Exactly a year ago, the rupee, having experienced a prolonged appreciating spree, had reached as high as 63.5 to a dollar. At the time, quite a few commentators wondered aloud if the Indian currency was overvalued and whether was a moderation was necessary.

The trend of the rupee has entirely flipped this year. It has almost slipped 10 per cent since January, closing below the psychological 70-mark this month for the first time in history. Now, a wave of concern has swept the economy on the possible drawbacks from a depreciating currency.

There have been a mix of external factors that have contributed to the downslide. The immediate reason has been the crisis in Turkey, where President Recep Erdogan has chosen to pick a fight with Washington. As a result, foreign investors have begun to withdraw money from emerging market economies fearing that what happens in Turkey won’t remain in Turkey.

But, India’s currency slide predates the Turkey turmoil. Since the beginning of the year, foreign investors have sold $6.8 billion in equity markets and $5.15 billion in debt markets. A leading reason has been the raising of the interest rates by the US Federal Reserve as a part of the tightening of its monetary policy, which has prompted investors to pull their funds out of the emerging markets. Advanced economies are unwinding years of loose monetary policy practiced over the last decadein the post-crisis period. So, the financial market volatility arising out of it is here to stay for the developing world in the near future.

India, therefore, has not been alone with a weakening currency. However, it has been the hardest-hit in Asia. This points to inherent vulnerabilities in the Indian economy itself. Even though a case can be made that the currency has been merely adjusting to its true value after having appreciated a year ago, the issues that arise out of a weak rupee are hard to deny.

The most problematic aspect is the rising import bill that is mostly led by oil for India. The country is the third-largest consumer of oil in the world after US and China and about 82 per cent of this is imported. Global oil prices have already been on the rise this year and a weak rupee merely acts as a double whammy for the economy.

As a result, India’s current account deficit, the difference between national savings and domestic investment, is also on the rise and is expected to touch 2.6 pervcent of the gross domestic product in this financial year compared to 0.6 per cent merely two years ago. The country’s trade deficit in July had hit a five-year high of $18 billion. The other side of the story in a widening trade deficit is a sluggish growth in exports, which is a painful reality for the Indian economy.

It is often argued that a depreciating currency is not bad since it helps boost exports. However, in this case, even such gains might not materialise. First, since the currency depreciation is not unique to India and is occurring throughout the developing world, domestic exports might not seem particularly attractive in the global markets. Some of the othercompeting emerging markets have witnessed even greater currency depreciations.

Second, recent evidence has shown that depreciation does not always boost exports. In the 2013 ‘taper tantrum’ episode, when the Indian rupee lost about 20 percent of its value after the Fed hinted at winding down its quantitative easing programme, the country’s export levels remained unaffected.

Finally, as the world economies are becoming more protectionist in nature, the global demand is likely to remain subdued. Thus, India’s export prospects seem bleak for the time being.

There is a dire need to address the repeated macroeconomic vulnerability of the Indian economy that is linked to its currency fluctuations. It remains difficult for any government to devote resources towards developmental efforts if cyclical external shocks keep defining policy constraints. In the short run, the excessive dependence on imports for crude oil has to be reduced. This would require a significant boost in domestic oil exploration and production, which has not been done in the last two decades.

A more long-term approach should involve debunking the belief whatsoever that depreciation of currencies has any relation with higher exports. Instead, the focus should be on improving the productivity of the country’s resources, which can help set its export basket apart from that of its competitors in the world markets. Such an approach would disassociate export performance from periodical external shocks and improve macro-economic stability.

China, for instance, no longer competes on cheap labour and devalued currency. Higher efficiency and better quality are gradually becoming the hallmarks of Chinese manufactures. The country’s mobile exports that are taking over the Indian markets are a case in point.

Finally, in addition to keeping its house in order, India can also address its macroeconomic vulnerabilities with higher international cooperation on the monetary and financial front. The world is missing effective international policy coordination that can ensure financial stability across global markets. India can take the lead on international forums with the support of developing nations that face similar financial risks and put such issues on the policy agenda. India needs to move away from a scenario of uncertain currency fluctuations as it has experienced over the course of last year.

The article was published with Business Standard, Money Lifeon August 28, 2018.