State competitiveness as a tool for economic development

Home State competitiveness as a tool for economic development 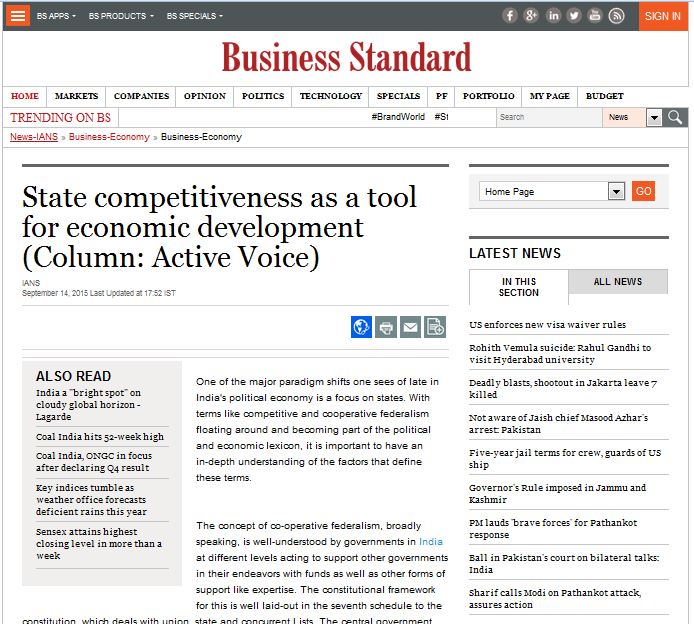 State competitiveness as a tool for economic development

One of the major paradigm shifts one sees of late in India’s political economy is a focus on states. With terms like competitive and cooperative federalism floating around and becoming part of the political and economic lexicon, it is important to have an in-depth understanding of the factors that define these terms.

The concept of co-operative federalism, broadly speaking, is well-understood by governments in India at different levels acting to support other governments in their endeavors with funds as well as other forms of support like expertise. The constitutional framework for this is well laid-out in the seventh schedule to the constitution, which deals with union, state and concurrent Lists. The central government often acts to provide funds for fulfilling the schemes and objectives of the state governments. The not-so-well understood term is competitive federalism or state competitiveness that often implies a competitive spirit among regions looking for growth. It is often spurned by the performance within a state that in turn allows greater investments and further economic development.

A pertinent question to ask is what makes a state competitive? There are many factors that that do so. Broadly speaking, these include policies made by the government (taxation policies, ease of doing business) as well as factor markets like land, labour and capital within the state. Also important are related and supporting industries that help in the organization of factors of production and enable the growth of industries (either agro or manufacturing or service driven). Also very critical is the demand within the economy that calls for greater investment leading to greater production, consumption and exports. All these factors, when working in tandem enable states to become competitive and attract greater investments as well as achieve economic development.

Let us consider Karnataka as a case in point. Karnataka is transitioning economy with a good presence of factor markets. The state has a land area that is 5.83 percent of India’s total. The state also has seen solid infrastructure development with three domestic and two international airports. Similarly, the state is home to 12 minor and one major port. The highways (6,540 km in May 2015 up from 4,688 km in May 2014) and power sectors (approximately 15,000 MW in June 2015) have similarly seen rapid growth in the recent past. With respected to people, the state has around five percent of the country’s total population with a literacy rate of 75.6 percent that is just above the Indian average of 73 percent. The state has plenty of avenues for higher education with 44 Universities, the fifth highest in the country, as well as almost 300 polytechnics and 206 engineering colleges. The state is also home to several premier institutions like the Indian Statistical Institute, The Indian Institute of Science, The Indian Institute of Management and National Law School of India University, among others. Karnataka has also done well with respect to access to credit and banking infrastructure – the fourth highest gross credit and the fourth highest aggregate deposits.

In the industrial segment, one often hears stories of Karnataka’s core IT services’ sector. IT and electronics are certainly the backbone of the state, but other sectors have also done well over the years. These include biotechnology, engineering, textiles, agro and food processing and aerospace industries. With respect to IT, Karnataka has the fourth largest technology cluster after Silicon Valley, Boston, and London. The state accounts for a 40 percent share in India’s exports of electronic and software products. The state houses one-third of India’s total IT professionals. With respect to biotechnology, the state houses approximately 60 percent of India’s total biotech units.

In the engineering domain, the export sector has seen a rapid rise to reach approximately $3.50 billion in 2014-15. The state is India’s fourth largest in terms of automotive production with three auto clusters, one industrial valve cluster and one auto component cluster. In the textile segment, the presence of cotton, silk (one-third of India’s total silk is produced here) have made Karnataka account for roughly one-fifth of the national garment production. In the agro-industries space, the state has left its mark while accounting for more than two-thirds of India’s overall coffee production. Karnataka is one of the pioneers in aerospace production and produces more than a quarter of India’s aircraft and spacecraft.

Thestate’s export performance over the years has been exceptional. It accounts for 13.01 percent of the country’s total exports and approximately six percent of the country’s GDP. This exceptional performance is due to the presence of robust IT and electronics sectors. The state has also seen good Foreign Direct Investment (FDI) according to DIPP data. The RBI’s Bengaluru center accounted for Rs.90,000 crore or seven percent of the FDI inflows from April 2000 to June 2015. This is the fourth highest in the country after the Mumbai, New Delhi and Chennai centers.

The growth of these various sectors in the economy is also driven by appropriate sector-specific policies. The state has done well to have sector-specific policies for IT, SEZs, semi conductors, solar energy, tourism and most recently, the Industrial Policy 2014-19 and the Minor Ports Policy. Synergistic coordination between public policy, factors of production and capital have enabled Karnataka emerge as one of the country’s most competitive states. Its focus on clusters in IT and electronics – and with the necessary skilled resources and infrastructure – have led it to be labeled the ‘Silicon Valley of India.’

It’s a model other states could well replicate.

Published in Business Standard on September 14, 2015. To know more