4 ways to make the Swachh Bharat campaign a success

Home 4 ways to make the Swachh Bharat campaign a success 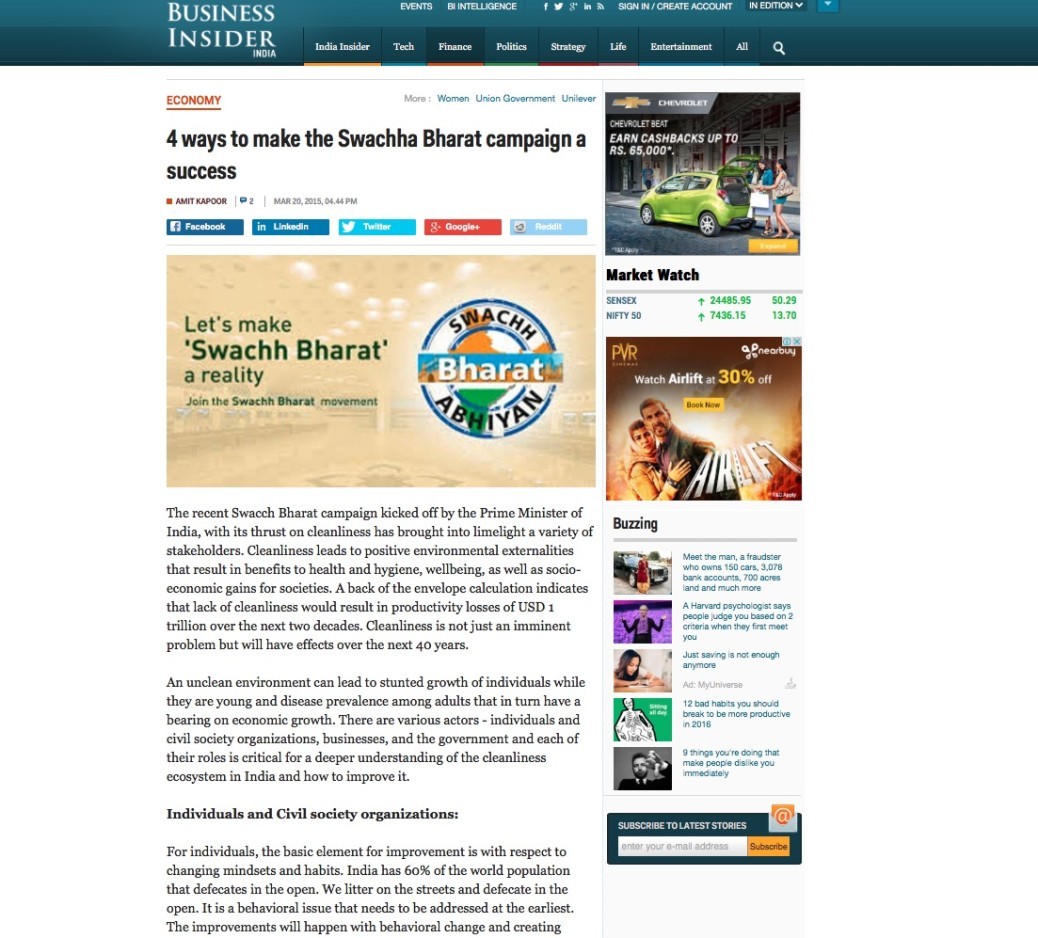 4 ways to make the Swachh Bharat campaign a success

The recent Swacch Bharat campaign kicked off by the Prime Minister of India, with its thrust on cleanliness has brought into limelight a variety of stakeholders. Cleanliness leads to positive environmental externalities that result in benefits to health and hygiene, wellbeing, as well as socio-economic gains for societies. A back of the envelope calculation indicates that lack of cleanliness would result in productivity losses of USD 1 trillion over the next two decades. Cleanliness is not just an imminent problem but will have effects over the next 40 years.

An unclean environment can lead to stunted growth of individuals while they are young and disease prevalence among adults that in turn have a bearing on economic growth. There are various actors – individuals and civil society organizations, businesses, and the government and each of their roles is critical for a deeper understanding of the cleanliness ecosystem in India and how to improve it.

For individuals, the basic element for improvement is with respect to changing mindsets and habits. India has 60% of the world population that defecates in the open. We litter on the streets and defecate in the open. It is a behavioral issue that needs to be addressed at the earliest. The improvements will happen with behavioral change and creating awareness. The awareness can be created with the help of media and other civil society organizations that work at the grassroots to help people change behavior with respect to cleanliness and open defecation.

The government role is an enabler and in providing basic amenities. These include water, sanitation facilities, etc. The government at present is acting as an enabler and champion of cleanliness (at least at the union level). The role is also to build institutions and create an environment conducive for ensuring cleanliness. The thrust should also be not just on cleanliness but the broader construct of social progress of which cleanliness is an integral part. The role of government is also to understand the paradigm of city growth and rural-urban transformation and take steps to manage the problems of people residing in these. At the local level, the role is to look at market-based solutions for problems like solid waste management, sanitation for households, cleaning the streets, etc.

These have an economic as well as a moral role in helping communities progress. Market-based solutions are key to solving the cleanliness conundrum. Businesses should start by looking at their value chains and cutting waste across various activities in their value chains like in their inbound logistics, outbound logistics, etc. It will lead to not only economic gains but also social good. There is a case to produce goods and services that are environmentally friendly with lower impact on pollution levels especially after they are disposed. These include the packaging materials used for providing goods. If they are made environmentally friendly, they will be easy to dispose of and will help in the creation of a clean environment.

There have been numerous instances of corporates having benefited communities that in turn have had benefits for the corporates. Unilever, for example, has done the Shakti Amma Program that has had a benefit for not just rural women but has had positive benefits for Unilever as a corporation with better rural penetration. The imperative for business is also to look at solutions that are scalable, sustainable, affordable and acceptable within communities where they operate. This is where the corporates also have to look at business model innovations for great social, economic and environmental good.

There is also the idea that each of the 640 districts of India should be adopted by one corporate each in conjunction with the local government. It can be included in their CSR budgets if need be or can be done voluntarily by corporates to support the cleanliness paradigm that the Union government is trying to put into the social consciousness of the people.

These stakeholders will have to play their part well over the next couple of decades if India is to become a society that has a clean environment, is socially inclusive and most importantly is productive and competitive. The ultimate well-being of the people is the true measure of development and cleanliness is an integral part of it.

Published in Business Insider on March 20, 2015. To know more