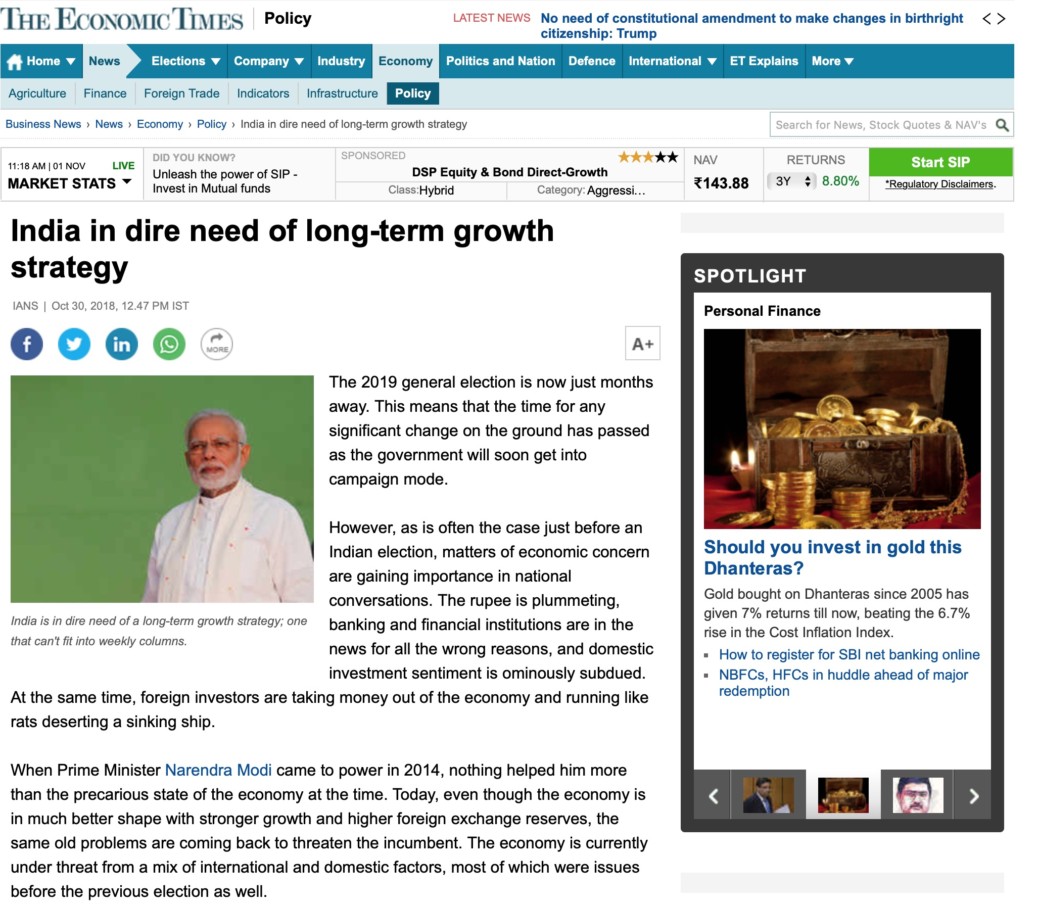 The 2019 general election is now just months away. This means that the time for any significant change on the ground has passed as the government will soon get into campaign mode.

However, as is often the case just before an Indian election, matters of economic concern are gaining importance in national conversations. The rupee is plummeting, banking and financial institutions are in the news for all the wrong reasons, and domestic investment sentiment is ominously subdued. At the same time, foreign investors are taking money out of the economy and running like rats deserting a sinking ship.

When Prime Minister Narendra Modi came to power in 2014, nothing helped him more than the precarious state of the economy at the time. Today, even though the economy is in much better shape with stronger growth and higher foreign exchange reserves, the same old problems are coming back to threaten the incumbent. The economy is currently under threat from a mix of international and domestic factors, most of which were issues before the previous election as well.

On the global front, three major factors are fuelling India’s current economic problems: Rise in US interest rates, the rising oil prices and a growing sense of trade protectionism around the world, resulting in a trade war that is making global investors jittery. Of the three, the first two were pertinent issues in 2013-14 as well.

The first hint of US winding down its tight monetary policy had led to a flight of capital out of emerging economies. Until mid-October, foreign institutional investors had withdrawn a whopping Rs 90,000 crore from India’s capital markets. The country has accumulated a huge pool of reserves to deal with the issue since it was caught unawares in 2013, but clearly it was not enough to stem the slide of the rupee, which has fallen by over 14 percent in this calendar year.

Meanwhile, an issue that will have maximum bearing on voters is the rising oil prices. Global crude oil prices have risen by 24 percent since April this year, after the Organisation of Petroleum Exporting Countries (OPEC) decided to cut production. Such an escalation, combined with a sliding rupee, has resulted in a double whammy for India. A rise in the price of a barrel of oil by one dollar raises the country’s import bill by Rs 823 crore. This has resulted in the widening of the current account deficit (CAD) to 2.4 percent of the GDP in the first quarter.

Another factor with a strong bearing on the fortunes of the Indian economy is the developing trade war between the two largest economies in the world. As the US and China impose newer and higher tariffs on imports into their countries to get back at each other, India plans to introduce higher tariffs on US imports from November in response to the latter’s import tariffs on aluminium and steel. India needs to be careful not to aggravate the situation for itself by getting caught in this cross-fire. In 2017-18, India exported almost double what it imported from the US and it would be an unnecessary burden on the CAD if the equation changed.

On the domestic front, the situation seems to be no better. When Modi came to power, one of the biggest expectations was that the so-called “animal spirits” in the economy would receive a significant push by reviving muted investor sentiments. But in March 2018, investment accounted for merely 30.8 percent of India’s nominal GDP. To put matters in perspective, the average investment between June 2004 and March 2018 has averaged at about 35 percent. In fact, CMIE (Centre for Monitoring Indian Economy) data shows that, for the first time, the value of new projects announced by private players in this quarter is lower than those announced by the public sector.

Another domestic problem is one which had developed much before the BJP government came into power. The country’s banking sector remains burdened by bad loans. Despite the best efforts with loan resolutions through the National Company Law Tribunal (NCLT), Indian state-owned banks had to write off over Rs 300,000 crores between April 2014 and April 2018 as per RBI data. The private banking sector has had its fair share of troubles as well with the top management at ICICI Bank and Yes Bank finding itself mired in controversies.

The only solace for the economy — that it is growing at an impressive eight per cent — is also misleading: An economy recovering from the twin shocks of demonetisation and GST is bound to inflate growth as it slides into normalcy. With no green shoots in sight, there are no straightforward solutions to the country’s economic situation. India is in dire need of a long-term growth strategy; one that can’t fit into weekly columns. But, instead, it is fire-fighting its way out of one crisis after another; or rather, from one election to the next.