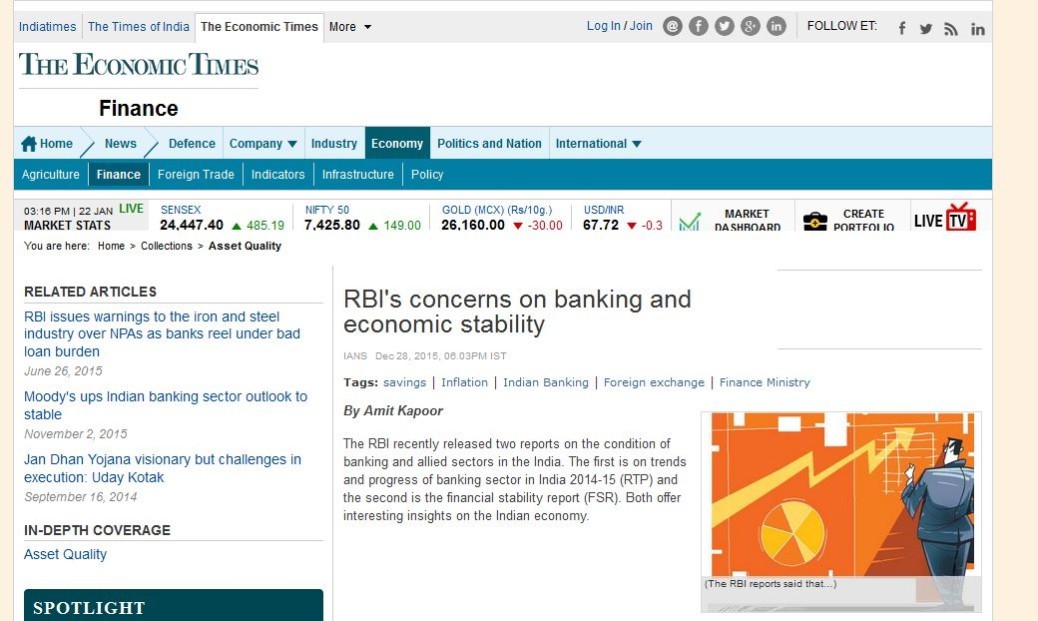 The RBI recently released two reports on the condition of banking and allied sectors in the India. The first is on trends and progress of banking sector in India 2014-15 (RTP) and the second is the financial stability report (FSR). Both offer interesting insights on the Indian economy.

Along with this, in both the groups, the asset quality declined. The report also mentions policy environment changes like falling commodity prices and the strengthening US dollar.

Amidst the policy environment challenges, the regulatory and policy responses during the year included initiatives for the de-stressing the banking sector, reforming and recapitalization of the PSB’s, making banking more inclusive and the like.

The FSR states that the corporate sector at present seems to be vulnerable and needs closer monitoring. This is in line with the view of the mid-year review of the finance ministry which states that of the four engines of growth – private consumption, public investment, private investment and exports – the first two are doing relatively better as compared to the last two. That private investment is not picking up can be explained by the fact that the corporate sector is under stress, and this is due to the leverage/ debt on their balance-sheets.

The FSR mentions an analysis of a large sample of non-government, non-finance companies (NGNFs), roughly some 20,000 public limited companies and approximately some 255,000 private limited companies. In both these, leverage (debt to equity ratio) has gone up from 2011-12 to 2013-14.

An analysis of a smaller sample of 2711 NGNF’s also yields another crucial insight about the sectoral composition and vulnerability. Sectorally, companies in the iron and steel and construction sector have both high leverage as well as interest burden.

The FSR seems to be reflecting on the soundness and resilience of the financial system. The year raised several concerns. The March-September period saw a reduction in growth of both deposits and credit as well as deterioration of asset quality with an increase in the gross non-performing advances (GNPAs).

Profitability of the scheduled commercial banks (SCBs) declined. The asset quality of both scheduled urban cooperative banks (SUCBs), as well as the non-banking finance companies (NBFCs), also deteriorated. The stress tests in these conditions on the banking front reveal that there is resilience, but it may become vulnerable amid deteriorating macroeconomic conditions.

Fourth, a significant point in the FSR is on the perception of risk by experts that is captured in the systemic risk survey. At present, this framework has five broad groups – global risks, macro-economic risks, market risks, institutional risks and general risks.

Compared to April 2015, the survey shows an increase in October 2015 in areas like the global slow down, sovereign risk/contagion and foreign exchange rate risk. These are now marked “high risk” in the report.

The perception of some risk items have reduced over this time frame, and these include domestic inflation, current account deficit, household savings, regulatory risk and natural disaster risks.

All this in the two reports point to the fact that a recovery is underway albeit sluggishly. The private sector and the banking sector, especially the public sector banks, seem to be inching towards stress.

Over the next year, de-stressing the financial system and reducing the debt burden so that private investment happens will remain crucial challenges for Indian bankers and corporate honchos. How they fare only time will tell.

Published in Economic Times on December 28, 2015. To know more