Two years of the Modi government: Pluses and minuses

Home Two years of the Modi government: Pluses and minuses 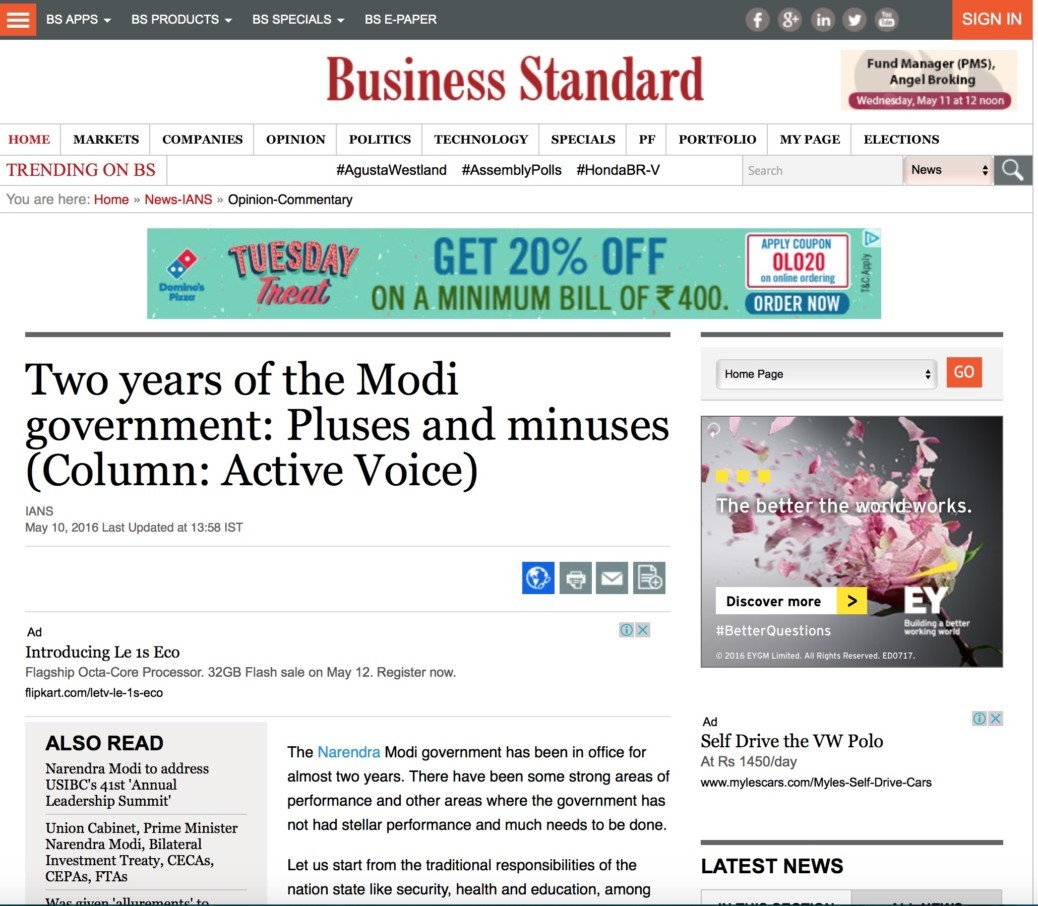 Let us start from the traditional responsibilities of the nation state like security, health and education, among others.

In the case of security both domestic security and foreign policy play a key role. The Modi government has been keen on the kind of vigour and agility that it has brought to the foreign policy discourse. However, the institutional capacity regarding the number of diplomats and missions to different countries has been a limiting factor. The existing framework for the foreign policy implementation for a country the size of India is far smaller than what is required.

Also, the kind of depth regarding research and experts which is needed is missing. This is where a systematic improvement concerning capability and numbers is required. The Modi government, to its credit, has touch based with 130 countries in the two years but this will have to be substantiated with ongoing processes and engagements rather than one-off meetings.

On internal security and home affairs, the performance has been on a par with the previous regimes. Though some incidents did take place which were “communal killings” especially like that of a man lynched in Dadri for consuming beef (an unfortunate incident), the situation is similar to the previous regimes.

The Maoist movement remains a potent threat to the peace and stability in many districts of India as it had during the previous regimes. The only way to neutralise this menace is mainstreaming the Maoists, who are misled about the nature of the Indian state.

On health and education, the government is seen shifting the responsibility more on the states. This is because of the government’s acceptance of the proposals of the 14th Finance Commission, which increased the allocation of states from 32 percent to 42 percent of the divisible funds. This is a welcome step but the problem still pertains to the capability of the states to understand and have the capacity to use the funds for health and education.

With respect to education at the school level, the Annual Survey of Education reports (ASER) consecutively point to the glaring inadequacies with respect to attainment of basic skills like reading and arithmetic.

In the healthcare domain, the challenges seem to increase with changing disease patterns, especially with the coming of lifestyle diseases like diabetes and the like. The aim of a productive population can only be fulfilled in a disease-free society. In this context, the Swachh Bharat Abhiyan (Clean India Programme) was a positive step. However, how much of an impact it has had on people littering on the streets/maintaining cleanliness is not very well documented/understood.

A lot in the future will depend on how social programmes such as these find consonance with people. Only then can the country move ahead. The government’s role here is to facilitate preventive healthcare and help provide facilities for treatment (health) and upliftment of the people (education).

Apart from the basic responsibilities, some other areas include electricity and power supply, roads and railways where the government is seen providing proactive service to people. In these areas, the improvements over the previous regimes have been significant and these are areas where the government has done good work and needs to be commended.

A field in which the government has not been able to do much and which came to the fore recently has been water. Here, due to two years of deficient monsoon, the buildup was there and this has led to a condition of drought in several parts, most notably in Marathwada in Maharashtra. The government has done well to avert a crisis by sending water trains to people in Latur and other areas.

However, the best strategy is to find long-term solutions. In this year’s budget, the finance minister talked about several irrigation schemes to be put on a fast track. Though the IMD is predicting an above-average monsoon this year, it would be wise to continue with the irrigation projects well into the future so that the farmers and people do not face the drought-like situations in the future that we see today.

Another achievement of the government has been its ability to keep a tab on high-level corruption. Apart from this, the direct devolution to the cities for the Smart City development programme is another positive of the government.

A negative has been a confrontationist attitude and the inability to pass critical bills like the GST in the Rajya Sabha, which is seen to be a negative.

On balance, the government has done well in trying to govern well over the previous two years. How successful its programmes and policies will be, only time can tell.

Published in Business Standard on May 10, 2016. To know more