Tapping Into the Evolving Telecom Sector 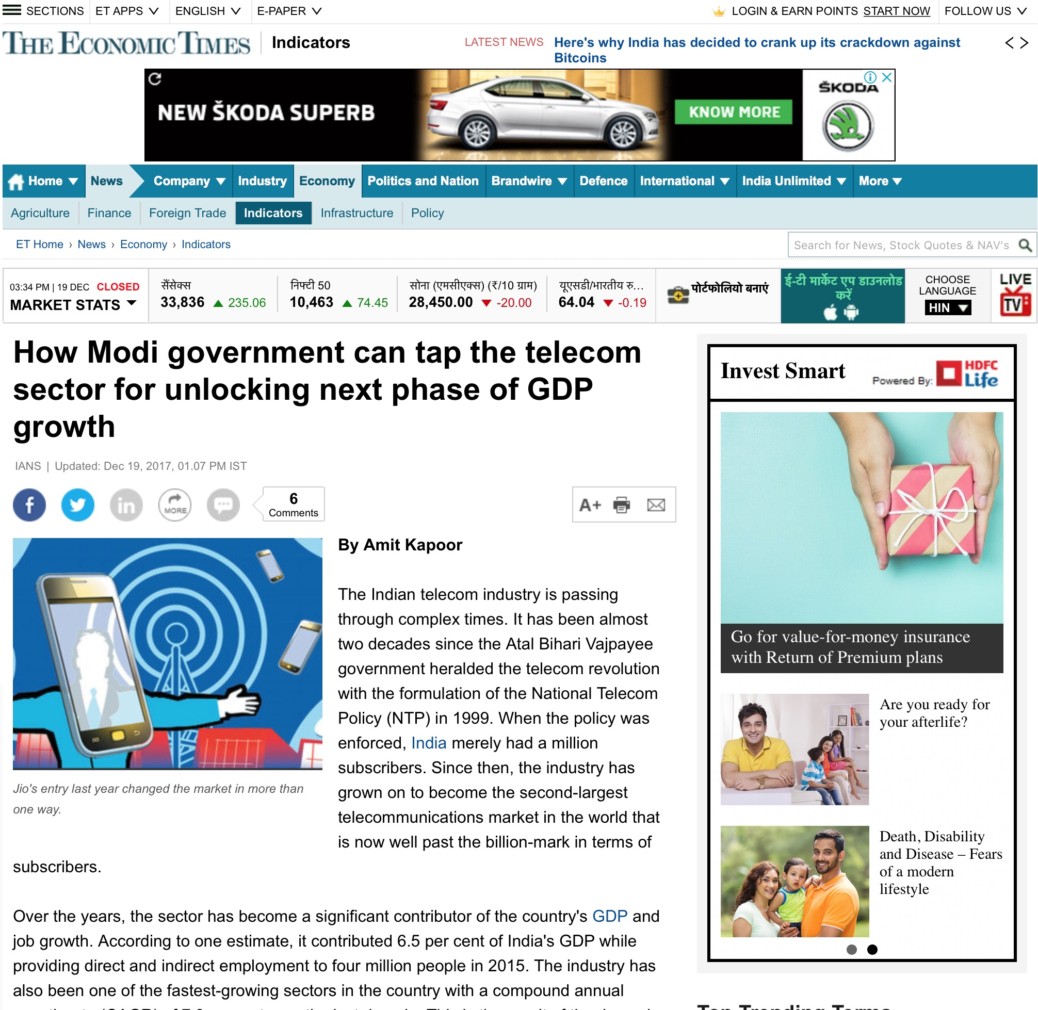 Tapping Into the Evolving Telecom Sector

The Indian telecom industry is passing through complex times. It has been almost two decades since the Atal Bihari Vajpayee government heralded the telecom revolution with the formulation of the National Telecom Policy (NTP) in 1999. When the policy was enforced, India merely had a million subscribers. Since then the industry has grown on to become the second-largest telecommunications market in the world that is now well past the billion-mark in terms of subscribers.

Over the years, the sector has become a significant contributor of the country’s GDP and job growth. According to one estimate, it contributed to 6.5 percent of India’s GDP while providing direct and indirect employment to a total of 4 million people in 2015. The industry has also been one of the fastest-growing sectors in the country with a compound annual growth rate (CAGR) of 7.3 percent over the last decade. Such a high rate of growth is a result of the dynamic and hyper-competitive nature of the Indian telecom market. The competition among telecom companies has risen to the extent that the telecom tariffs charged across the country are one of the lowest in the world.

However, the pace of transformation of the industry over the course of last year has been astonishing even by its own standards. It all began in September 2016 with the entry of Reliance Jio into the telecom fray that was already saturated by giants such as Bharti Airtel, Vodafone India, Idea Cellular and BSNL along with other smaller players. Until then, the industry had derived 75 percent of its revenue from voice and as each operator tried to gain market share by offering competitive prices, it seemed to have bottomed out reaching as low as $0.01 per minute.

Jio’s entry last year changed the market in more than one way. First, the battle shifted from voice to the data front. Reliance had spent the last few years building the largest LTE network in the country that allowed it to provide Voice over LTE services at virtually no extra cost enabling it to offer free calling and only charge for data.

The second significant impact of Jio’s entry has been in the form a consolidation wave that has swept the industry due to escalated levels of competition. The competitive intensity in the telecom market has been so intense that scale has become a necessary prerequisite. In fact, in order to quantify the increase in market concentration, we calculated the Herfindahl-Hirschman Index (HHI) for the telecom market before and after the entry of Jio using TRAI data.

In a scale of 0 to 10,000 with a higher score implying higher concentration, we found out that HHI increased by almost 1000 points from 1543 to 2490 between June 2016 and June 2017. To put matters in perspective, the US Department of Justice considers a market with a HHI of less than 1500 to be competitive, one between 1500 to 2500 to be moderately concentrated and one beyond 2500 to be highly concentrated.

This rise in HHI has been a result of a spate of mergers that have taken place since Jio’s entry. Bharti Airtel has acquired the telecommunication services of Tata, Telenor and Videocon while Vodafone is in its final stages of merger talks with Idea.After the merger, Airtel will lose its two-decade-long held position as the industry leader since the Vodafone-Idea combine will command a subscriber base of 400 million as compared to Airtel’s 320 million. At last count, Jio’s subscriber base stood at 138.6 million in September 2017. Considering that it had started from scratch a year ago, the figure is simply gargantuan and presents the incumbents with effective competition and takes the industry towards maturity.

The final impact of Jio’s entry, which is often less talked about, is in its effect on increasing mobile and data accessibility. The Indian telecom industry was adding an average of 54 million wireless and 50 million internet subscribers each year until mid-2016, as per TRAI (April-June) reports. On the contrary, over the course of last year (June 2016-June 2017), the industry has added over 150 million wireless and 80 million internet subscribers. Jio’s entry in September 2016 has had a clear effect on the acceleration in adoption of mobile technology and, especially, internet.

India’s telecom revolution has been the driving force of the economy since the turn of the century and it has done well to evolve along with the times to climb the data bandwagon. It has largely gone unnoticed, but this year India has also become the highest mobile data user in the world with monthly usage exceeding a billion GB. As data accessibility of Indian consumers increases, it creates a multitude of opportunities for the government to reach out and enable social progress by providing services that were previously not feasible. Tapping into these opportunities can unlock the next phase of growth for the Indian economy.

The article was published with Business Standard, Economic Times, Money Life on December 19, 2017.