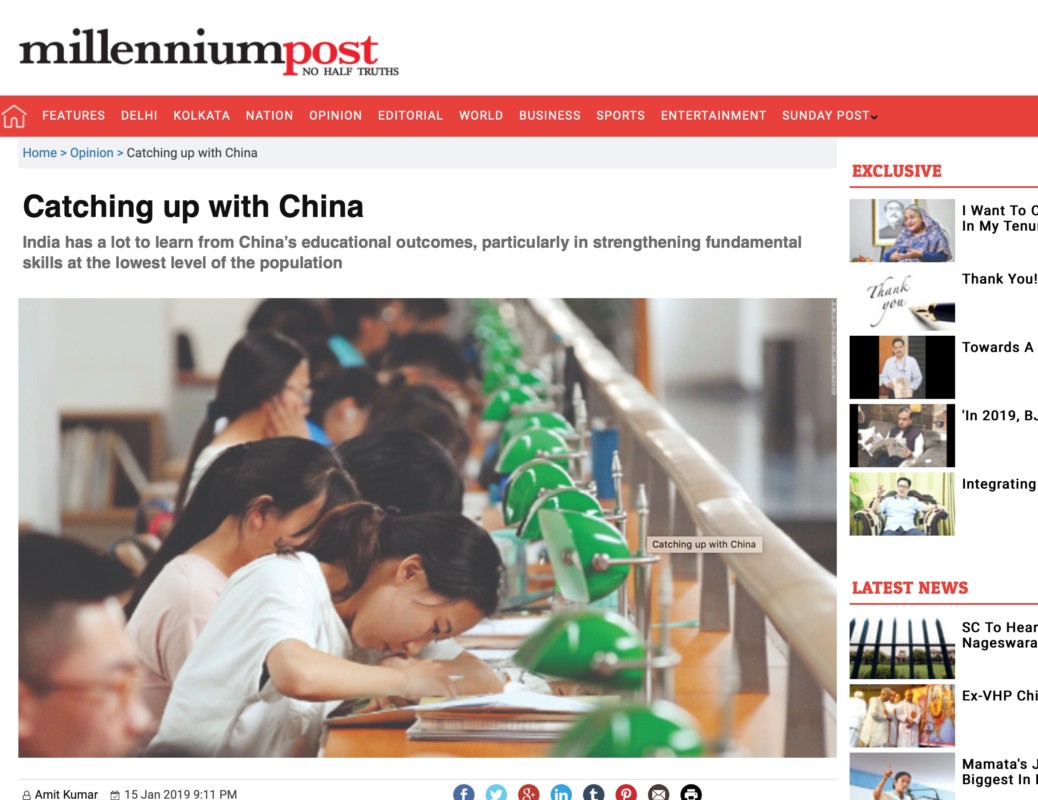 Both China and India, started building their national education systems under comparable conditions in the late 1940s, but varying policies and historical circumstances have led them to different educational outcomes, with China outperforming India not just in terms of its percentage of literate population and the enrolment rates at all levels of education, but also in terms of number of world class institutions in higher education, and greater research output.

The roots of the successful education system of China date back to the outbreak of Cultural Revolution (1966-1976), which unintentionally expanded access to the primary education through democratization of the schooling system, which was previously elitist in character, thus, addressing the problem of mass illiteracy. In contrast to this, India continued to focus on its higher education system since its independence and only realized the importance of basic education in 1986, keeping it behind China and many other countries in Asia in the educational development. In terms of the enrolment, China reached a 100 percent gross enrolment rate in its primary education in the year 1985, whereas, India attained that level only in the year 2000.

Although, India is converging to the Chinese rate in terms of access to education, but looking at the literacy levels, there is a huge gap in the percentage of literate population in the two countries. In the age group of 15-24 years, India scores 104th rank on literacy and numeracy indicator, compared to China’s 40th rank (WEF, 2017).

The OECD Programme for International Student Assessment (PISA), which assesses after every three years the domain knowledge of 15-year old students in reading, mathematics, science, and finance, revealed that students in China performed above the OECD average in 2015. Moreover, one in four students in China are top performing students in mathematics, having an ability to formulate complex situations mathematically. Further, China outperforms all the other participating countries in the financial literacy, by having a high ability to analyze complex finance products. For India, the comparable data is not available as it was not a participating country in the PISA 2015.

However, in India, The Annual Status of Education Report (ASER),2017, provides data for the rural youth, age 14-18, with respect to their abilities to lead productive lives as adults. According to this survey, only about half of the 14-year old children in the sample could read English sentences, and more than half of the students surveyed could not do the basic arithmetic operations, like division. For basic financial calculations, such as managing a budget or making a purchase decision, less than two-thirds of the youth aged children could do the correct calculations.

In terms of the international recognition of the universities, the Times Higher Education (THE) World University Ranking for 2019, place seven of the China’s universities in the top 200, compared to none for India. The global university rankings which are based on various performance metrices, pertaining to teaching, research, citations, international outlook and industrial income, shows progress for several Chinese low ranked universities, largely driven by improvements in its citations. Infact, the Tsinghua University has overtaken the National University of Singapore (NUS) to become the best university in Asia, due to improvements in its citations, institutional income and increased share of international staff, students and co-authored publications.

While India has progressed in terms of massification of education, there is still at lot which needs to be done when it comes to catching up with the China’s educational outcomes. China’s early start on strengthening primary and secondary education systems has given it an edge over India in terms of higher education. Moreover, Chinese government strategies are designed to the criterion used in the major world university rankings, especially emphasis is on the two factors which weigh heavily in the rankings- publications and the international students.

The relentless publications drive which is very evident in China, is very weak in India and has led to a growing gap in the number of publications contributed by the two countries (Kapur and Perry, 2015). Further, China enrolled about 292,611 foreign students in 2011 from 194 countries, while India presently only has 46, 144 foreign students enrolled in its higher education institutions, coming from 166 different countries. The large number of international enrolments in China is a reflection of its state policies granting high scholarships to the foreign students.

In order to catch up with China, India needs to lay emphasis on improving its educational outcomes. Massification drive for education has helped India raise its student enrolments, but a lot needs to be done when it comes to global recognition for its universities. Further, it needs to put focus on building the foundation skills which are acquired by the student at the school age, poor fundamental skills flow through the student life, affecting adversely the quality of education system.

The article was published with Millennium Post, Economic Times, Business Standard and Daily Hunt on January 15, 2019.