Way forward is to get things done without legislation

Home Way forward is to get things done without legislation 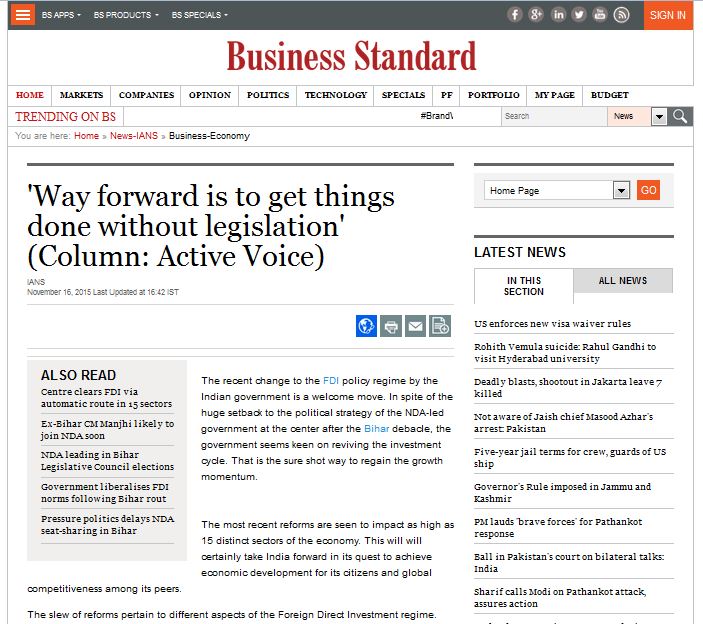 Way forward is to get things done without legislation

The recent change to the FDI policy regime by the Indian government is a welcome move. In spite of the huge setback to the political strategy of the NDA-led government at the center after the Bihar debacle, the government seems keen on reviving the investment cycle. That is the sure shot way to regain the growth momentum.

The most recent reforms are seen to impact as high as 15 distinct sectors of the economy. This will will certainly take India forward in its quest to achieve economic development for its citizens and global competitiveness among its peers.

The slew of reforms pertain to different aspects of the Foreign Direct Investment regime. The core issue of these reforms is to further “ease, rationalise and simplify the process of foreign investments” in the country and to put a greater number of FDI proposals on the automatic instead of the government route that investors are never keen on taking.

Thus, the impetus is clearly on easing the hassles investors and businesses face in investing in India’s growth story. These changes can be seen in light of the government’s push for bettering India’s performance on the Ease of Doing Business Ranking of the World Bank where this country is placed a dismal 130 in spite of improving 12 places (4 places on the new methodology) in comparison to the previous year.

Some of the reform measures include increasing the monetary limit for Foreign Investment Promotion Board (FIPB) from Rs.3000 ($455 million) to Rs.5000 crore. Proposals above Rs.5000 crore would go to the Cabinet Committee on Economic Affairs. The proposals also contain measures to correct the long-pending issues like limited liability partnerships as well as NRI-owned companies who seem keen to invest in India. Some proposals also seek to enhance the sectoral investment caps so that foreign investors don’t have to face fragmented ownership issues and get motivated to deploy their resources and technology with full force.

Other sectors where the reforms have been initiated include establishment and transfer of ownership and control of Indian companies, agriculture and agricultural husbandry, plantation, mining and mineral separation of titanium bearing minerals and ores. Also, changes have been made in sectors like defense, broadcasting, civil aviation, construction development sectors, cash and carry wholesale trading/wholesale trading (including changes to time of sourcing from medium and small sector) enterprises. A boost has also been provided to single brand retail trading and duty-free shops that might see a proliferation of better equipment manufacturing in India. Also, some changes have been proposed in the banking in private sector and India’s ailing manufacturing sector.

These changes are seen to be harbingers of the reform promise that had seen the coming to power of the Narendra Modi government in May 2014. The government’s recent push in FDI is seen to a be a positive development both in the policy circles as well as in the business and investor community – both of which have expressed their satisfaction with the move.

FDI constitutes the highest inflows to developing countries – even higher than the official development assistance (ODA) and the much talked about remittance flows to developing countries. The government’s push to reform the FDI policy regime is likely to be seen in the light of the liberalization and calibration of the economy further to bring in capital and technology necessary for economic growth and development.

Over the next year or so, the reform agenda, if pursued properly, can have a multiplier effect on the economy with investors, businessmen and most importantly consumers benefiting from better goods and services. The recent changes to the FDI regime only showcase that much can be achieved even without legislation. The way forward is to get things done without legislation that can benefit the people of the country.

Published in Business Standard on November 16, 2015. To know more