Data as a Driver of the Indian Economy

Home Data as a Driver of the Indian Economy 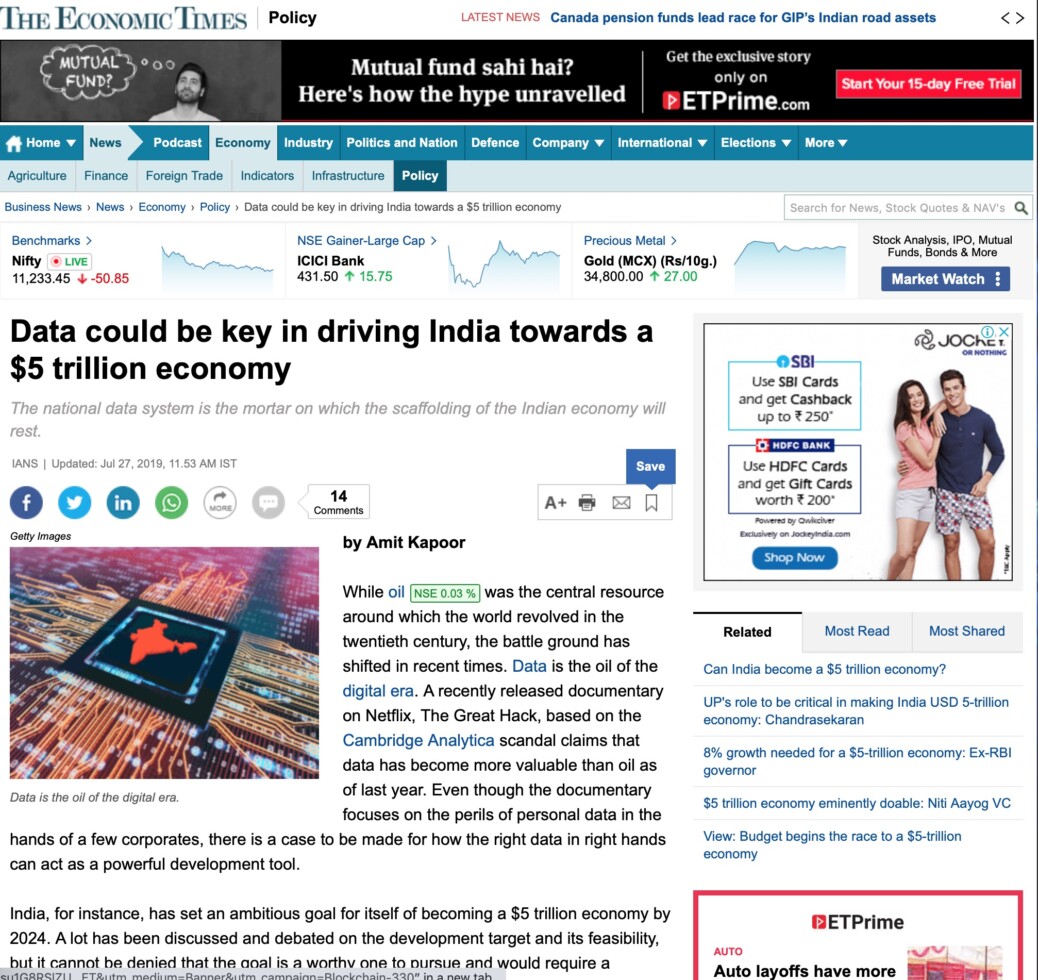 Data as a Driver of the Indian Economy

While oil was the central resource around which the world revolved in the twentieth century, the battle ground has shifted in recent times. Data is the oil of the digital era. A recently released documentary on Netflix, The Great Hack, based on the Cambridge Analytica scandal claims that data has become more valuable than oil as of last year. Even though the documentary focuses on the perils of personal data in the hands of a few corporates, there is a case to be made for how the right data in right hands can act as a powerful development tool.

India, for instance, has set an ambitious goal for itself of becoming a $5 trillion economy by 2024. A lot has been discussed and debated on the development target and its feasibility, but it cannot be denied that the goal is a worthy one to pursue and would require a focused approach by the government on key growth areas to obtain the desired results. Achieving optimal returns with limited resources in a short time frame will be a challenging ask. Data will play a key role in adopting a focused approach in this case.

The infrastructure of the national data system in India will be put to a test during these years. They are the mortar on which the scaffolding of the Indian economy will rest. Data needs to play a larger and larger role in the daily decision-making process of the government as it will make governance more informed and localized. Michael Lewis exemplified in his highly acclaimed book, Moneyball, on how the general manager of Oakland Athletics, Billy Beane, managed to build a better baseball team with less money using statistics and data analytics. His evidenced-based approach allowed him to allocate resources judiciously and immediately brought the team at par with more well-endowed clubs.

Today, baseball teams have moved on from signing players based on gut instinct to using data analytics to inform its key decisions. Likewise, the Indian economy needs to adopt such an evidence-based decision-making approach. It will allow governments to gain a more holistic view of its citizens and help them better respond to the dynamically changing needs of the public. Since good governance is all about delivery, data should be the conduit on which it is based. Data-driven policy making also has the benefit of driving a more informed and rational public debate across the country.

On a promising note, data is already proving effective in generating societal returns across India. The relocation of people in Odisha before cyclones that could potentially kill thousands is one such example. Another major indication of data usage transforming into good governance came from the electoral results of the recent general elections. The BJP government in its first term had identified 115 districts as “aspirational” using a set of socio-economic indicators, which were quite simply the most underdeveloped regions in India. The poorest households in these districts were directly targeted with various social welfare schemes. In a recognition of the government efforts, the voters elected the BJP into power in over 60 percent of the “aspirational” districts. Thus, data-based policy making evidently has a substantial impact on the people.

The Indian government has recognized the relevance of data in policymaking and put in place mechanisms that will deliver better quality of public data on development parameters. The Ministry of Housing and Urban Affairs has launched the DataSmart Cities to leverage data that can provide actionable intelligence on city governance. The Swachh Bharat Abhiyan (Clean India Mission) has been supplemented with a data-based initiative, the Swachh Survekshan (Cleanliness Survey) to access the performance of Indian regions on cleanliness and instill among them a competitive spirit.

Such steps towards data-based governance are in the right direction but need to be heavily ramped up to achieve the $5 trillion target. A large volume of data is still not available in digital format, which needs to be addressed. A lot of government departments are also reluctant or slow in sharing data. This trend needs to change and periodicity of data needs to be maintained to ensure timely and effective decision-making. Moreover, even when data is collected and published regularly, many government departments collect and collate them in silos using different formats and technology. This impedes its effective and efficient usage.

In times when data is becoming the most prized commodity, building a robust mechanism of its collection, publication and usage for policy decisions can give India a significant developmental push. However, it must also be noted that a critical dimension of data usage is the protection of personal information of citizens. It is a powerful tool that can transform lives but comes with privacy risks. A responsible usage of data analytics in governance is the need of the hour.

The article was published with Economic Times, Outlook India on July 27, 2019.