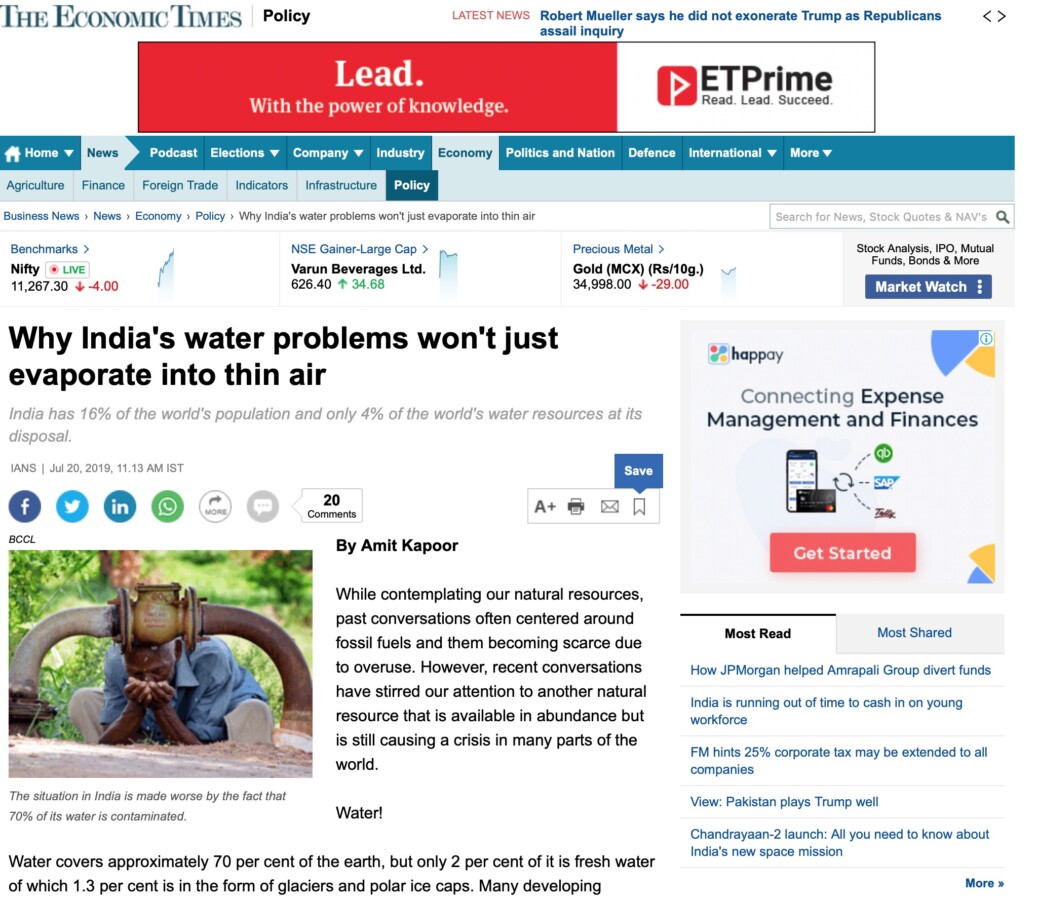 While contemplating our natural resources, conversations in the past often centered around fossil fuels and them becoming scarce due to overuse. However, recent conversations have stirred our attention to another natural resource that is available in abundance but is still causing a crisis in many parts of the world. Water! Water covers approximately 70 per cent of the earth, but only 2 per cent of it is freshwater of which 1.3 per cent is in the form of glaciers and polar ice caps. Many developing countries are struggling with ensuring that this basic resource is safe and accessible. Nowhere is this more obvious than in India. The country has 16 per cent of the world’s population and only 4 per cent of the world’s water resources at its disposal.

The situation is made worse by the fact that 70 per cent of its water is contaminated. As a result, India ranks 120 among 122 countries on the Water Quality Index released by WaterAid. According to the Composite Water Management Index (CWMI) report released by the NITI Aayog in June 2018, 21 major cities including Delhi, Bengaluru, Chennai, Hyderabad are racing towards zero groundwater levels by 2020, affecting access for 100 million people. Sustainable Development Goals (SDGs), which came into effect from January 1, 2016, aim to ensure Clean Water and Sanitation availability and sustainable management of water for all (Goal 6) by the year 2030. This is a basic human right which needs to be given the highest priority over other demands, considering the impact of a water crisis on food supply as well. The northern states at risk of water scarcity as per the CWMI report also account for about 20- 30 per cent of the country’s agricultural output, which indicates the associated food security risk for India.

One of the major reasons for this water crisis is groundwater depletion. Many states like Delhi, Haryana, Punjab, and Rajasthan have an annual groundwater consumption much greater than annual groundwater recharge. Moreover, this is only increasing with time. According to a study, India’s rate of groundwater depletion increased by 23 per cent between 2000 and 2010. India also uses the largest amount of groundwater—24 per cent of the global total—which is even more than China. This has resulted in overexploitation and contamination of groundwater. Another problem is the neglect of local water bodies which are being encroached or have dried out. Over-reliance on monsoons with water management systems have led to this predicament. The World Health Organisation (WHO) states that an individual requires around 25 litres of water daily for meeting his/her basic hygiene and food needs. The rest is used for purposes like mopping and cleaning. This shows that for purposes other than drinking, non-potable water can be supplied.

Thus, for economic efficiency and environmental sustainability, water must be supplied according to usage. Looking at the gravity of the problem, the Union Government has formed a Jal Shakti Ministry, which has launched a targeted water conservation programme that emphasises on specific interventions like rainwater harvesting and watershed development. While this is a step in the right direction, India cannot fight this problem without changing the dystopian reality of its agriculture and irrigation system. To ensure complete utilisation and maintenance of irrigation assets, states need to implement robust participatory irrigation management measures. There is a need to modernise the irrigation methods and adopt newer technologies while also switching to less water-intensive cash crop.

Additionally, states also need to drop the practice of supplying free and subsidised water. Market-based solutions through pricing of water supplied to urban homes can encourage efficient usage of water. Equity can be ensured through consumption slabs for the same. Delhi government, for instance, is making laudable efforts to address the water crisis by initiation of water harvesting plans on the Yamuna floodplains and installation of rainwater harvesting structures in all government buildings and existing structures. But these efforts need to be supplemented with elimination of free water supply to households that can very well afford to pay for it. To develop long-term solutions, state governments can incentivise entrepreneurs in designing decentralised technologies for measuring and improving water quality and recharging groundwater.

They also need to renovate existing infrastructures, such as water treatment plants, water networks, and reservoirs. The idea is to supply water to more people using the same capacities, rather than waiting for new infrastructures to be built. Public-private partnerships can be the way to go, where the public sector must retain ownership on the assets and set tariffs ensuring that these resources are affordable for all. Lastly, emphasis on behavioural change should also be made. As local citizens and beneficiaries, we need to realise our responsibilities and face the consequences of our actions. We need to keep our own usage and actions in check to overcome this issue before most of our cities are parched.

The article was published with Money Life,Millennium Post, Outlook India and Economic Times on July 20, 2019.