Competitiveness and the path to a prosperous India

Home Competitiveness and the path to a prosperous India 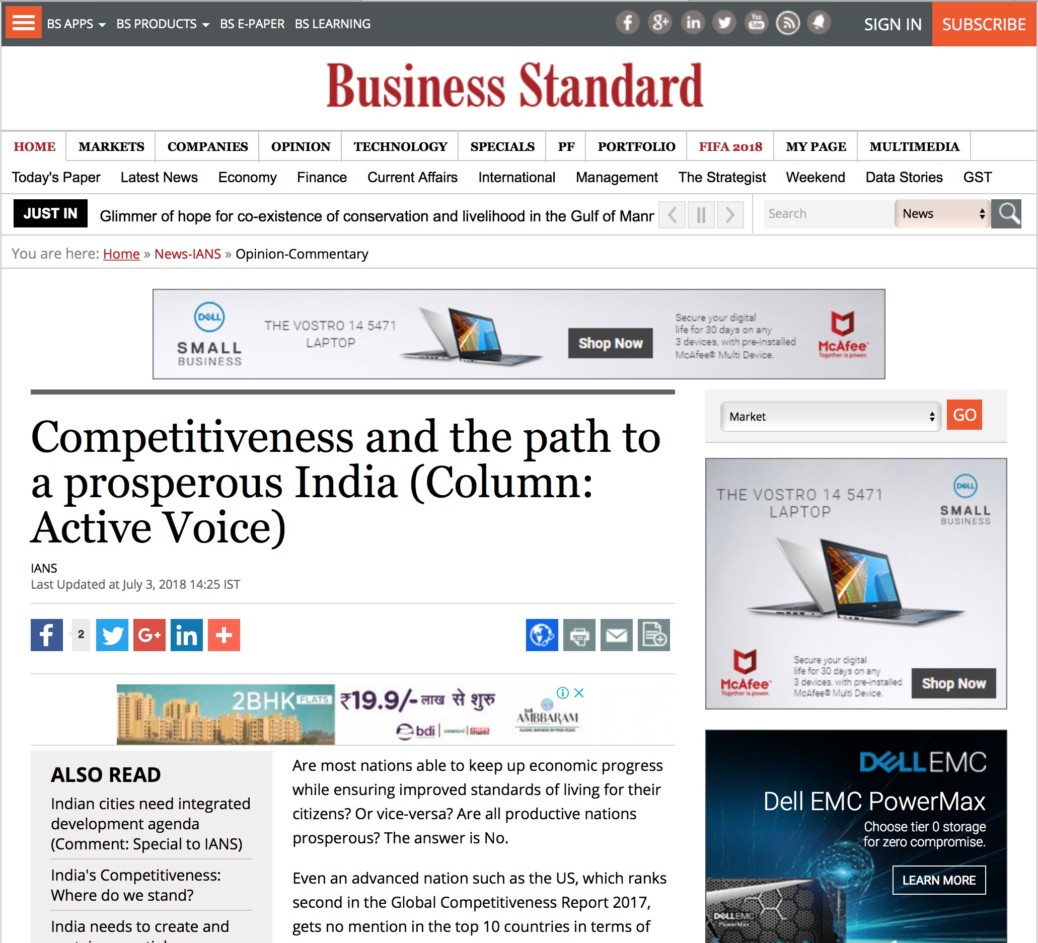 Competitiveness and the path to a prosperous India

Are most of the nations able to keep up the economic progress while ensuring increased standard of living for citizens of the nation? Or vice-versa? Are all productive and economically advanced nations prosperous? The answer is No.
Even the most advanced nations such as United States, which ranks 2nd in the Global Competitiveness Report 2017, get no mention in the top 10 countries in terms of social progress. On the other hand, a nation withholding the standard of a ‘very high social progress’ such as Iceland, barely makes it to the top 20 competitive economies of the world. Even a booming economy like China, which is ranked considerably high in terms of competitiveness, fails to assure that the citizens of the nation are also able to reap the fruits of the increasing competitiveness.

The question, thus, becomes, where does India stand?
World Bank has recently predicted that India is going to be the fastest growing economy in 2018-19 with a growth rate of 7.3%, and there is hope is that it will only move upwards in the coming two years, and currently stands at the 40th position globally in competitiveness. The Indian gross value added (GVA) has the largest contribution coming from the service sector, which has a sectoral GVA of 8.3, followed by GVA of 7.7 of industry, and 2.1 for agriculture and allied activities, based on the advanced estimates of 2017-18.

But, can we assume that flourishing economy will ensure a prosperous India? Not quite. Currently, India is grappling with a poor state of social progress standing at 98th position globally, much behind Asian countries like Japan, and its South Asian neighbours of Sri Lanka and Nepal. The citizens of the nations are still under the burden of an Infant Mortality rate of 37 per 1000 live births, wherein 21.92% of the population continues to remain below the poverty level. Even though there remains a positive relationship between competitiveness and social progress, India needs to deal with the pinching issues of poor standard of living for its citizens. As Dr. Michael Porter says, ‘Building prosperity is a marathon’, wherein it takes long to raise the competitiveness and even longer to ensure that the benefits of the increased productivity to reach the citizens.

No doubt India is facing an uphill task! Then, how do we make a prosperous nation?
India is showing potential of increased competitiveness lately, but the key to prosperity lies not just in economic progress, but in sustenance of the same, complemented by an increased standard of living for the citizens. On one hand, India needs pick up it’s pace at being an innovative economy, and let innovation and clusters drive it to a point of sustainable economic progress. Currently, online application for patents and trademarks has increased by 90% and 80%, respectively. The wheels of progress are already in motion for clusters as conducive environments are being created for IT-sector, especially in Bengaluru, which is already being called ‘Asia’s next Silicon Valley’. There are also talks about creating favourable business environment to create Artificial Intelligence Clusters in Maharashtra and cyber-security clusters in Hyderabad. The fusion of two growth-enabling factors is going to make India a sustainable competitive economy. On the other hand, the businesses need to create value for the citizens of the nation and ensure that such innovation is not restricted to just the productive sectors, but to facets of health, education, water and sanitation, as well as a struggling agriculture sector, which seems to be missing be a missing piece in the Indian scenario.

A sustainable economic progress and a robust social progress go hand-in-hand, and India can create this prosperity by learning from the best, especially NORDIC countries like Switzerland and Sweden. These nations are one of the few nations who ace the game in social progress as well economic progress, as their relative standing remains in the top 10 for both the facets. Creation of an innovative economy has also allowed these nations to reap the joys of being a prosperous nation, making them ideal prosperous nations.

The pathway to prosperity lies in India’s capacity to reach higher economic progress, sustain it and ensuring higher standards of living of its citizens, wherein the driving force must be innovation. So, the need of the hour is to create an innovation-economy which drives the economy and reaches the citizens of the country!

The article was published with MoneyLife, Business Standard on July 3, 2018.