Monopolies in digital space are bad for media and entertainment industry 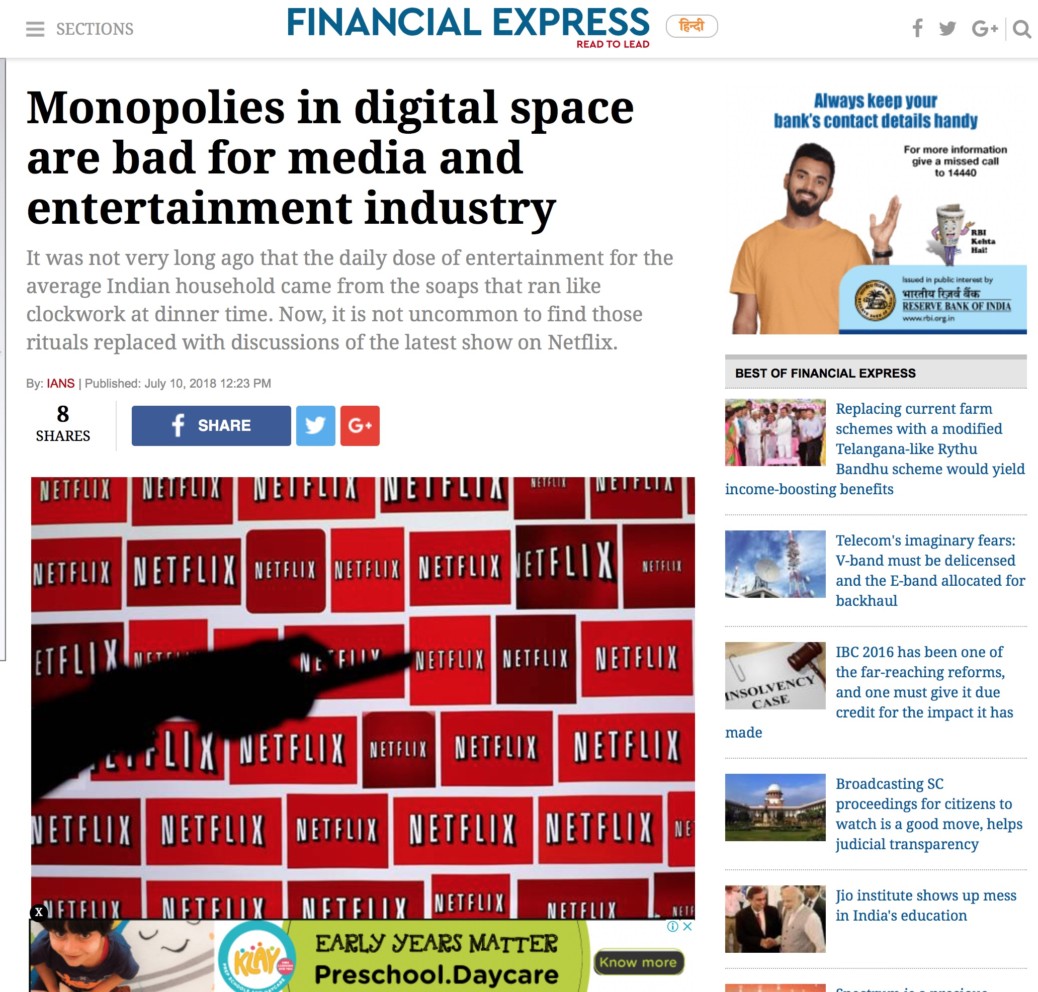 Monopolies in digital space are bad for media and entertainment industry

It was not very long ago that the daily dose of entertainment for the average Indian household came from the soaps that ran like clockwork at dinner time. Now, it is not uncommon to find those rituals replaced with discussions of the latest show on Netflix.

It was not very long ago that the daily dose of entertainment for the average Indian household came from the soaps that ran like clockwork at dinner time. Now, it is not uncommon to find those rituals replaced with discussions of the latest show on Netflix.

The digital media company has taken the global entertainment industry by storm. It is currently making TV shows in 21 countries by spending more on content creation than any studio spends on films. In fact, this year, Netflix will make three times more feature films than Warner Brothers, Hollywood’s biggest studio.

Tech firms like Netflix have historically shown immense potential to dominate existing industries or create new spaces where they quickly become irreplaceable. Facebook, Amazon, Apple and Alphabet (Google’s parent company) have become reflections of a general phenomenon of market concentration in the digital space. These firms are not just limited to America. The Chinese market has also created towering giants like Baidu, Alibaba and Tencent. These few tech behemoths form some of the biggest firms on the planet.

Such a growing market concentration among a few firms in both America and China is not only a pertinent issue for their home markets but for the emerging world as well. Interestingly, these firms have avoided competition in their home markets as Chinese markets have always been restrictive while America is gradually following along similar lines. The battle between these titans is, instead, being fought out in emerging markets. Among others, India is a hotly contested territory. Even indigenous players like Flipkart, PayTM, Ola and Zomato have been recipients of heavy Chinese funding from the same tech giants.

The growing monopolistic tendencies displayed by these firms is cause for concern because it is inimical to long-term economic growth for a variety of reasons. The most damaging effect of holding a dominant position is that firms are left with little incentive to invest in expanding their productive capacities because they already enjoy monopoly rents. A recent blog post by the Bank of France on the dangers of monopolies to the United States highlighted how investment has slowed since the 1980s in the nation despite rising returns on capital due to the increasing concentration of production among fewer firms.

In case firms do not cut back on investment despite their rising market power, they spend it on creating barriers to entry in the industry so that new competition is not created. Whatever competition is created is usually eliminated by buying emerging start-ups. Google, Amazon and Facebook have shown a high proclivity to do so to maintain their dominance.

A century ago Standard Oil was split into 34 firms for its ruthless exploitation of its dominance to eliminate any competition. But in the fast-paced digital world, it is widely believed that such anti-trust regulations are not as necessary because any tiny start-up holds the potential to kill an industry titan with new ideas and better tech. The case of Microsoft being pulverised by new start-up Google in the early 2000s is a case in point.

Nevertheless, despite all the benefits that society has derived from these constellation of tech giants, the immense market power in the hands of these few firms can be a dangerous proposition. The recent data scandal with Cambridge Analytica highlights the perils of such concentration in these market settings. More importantly, competition takes a back seat when markets tend towards monopolies.

Some commentators still like to argue that monopolies are not all bad. Recently, T.C.A. Srinivasa-Raghavan did this in his column in Business Standard. He pointed out how monopolies sometimes yield the same results of higher output and lower prices. The example he gave is of the Indian Railways, which has constantly expanded its services and charged below costs. “What more do you want,” he asked. For starters, railways are a perpetually loss-making venture of the Indian government with annual losses in recent years exceeding Rs 30,000 crores. And railways are a perfect example of how innovation takes a backseat in monopolies. Indian trains today run at same speeds as they did in the 1970s.

As for Google, Srinivasa-Raghavan asked if it mattered that the company sometimes throttles competition since the price of its services cannot get any lower. This completely misses the point. Monopolies are harmful because they hold immense power to kill any new threats that might emerge.

Take the case of Getty Images. In 2013, Google began allowing its users to directly download Getty’s high-definition images from its own website. As a result, traffic suddenly plummeted to Getty’s website by 85 percent. When the company asked Google to stop the practice, the latter simply responded by offering to exclude them from its search results. This was not really an option since Google is the most used search engine. And that is the problem with monopolies.

Even a company as innocuous as Netflix, which is churning out some of the best content in the entertainment industry right now, poses a threat of concentrating the kind of ideas shared with the masses in the hands of a few. As a smaller number of companies begin to control what we see on the shiny piece of real estate in our pockets, we need to be wary of the repercussions this is having on our societies. The emerging markets, especially India, are the biggest losers in the whole process as even the monopoly rents accrue to the domestic nations of these monopolies.

The article was published with Financial Express, Business Standardand Money Life on July 10, 2018.