India staring down the barrel of a major water crisis 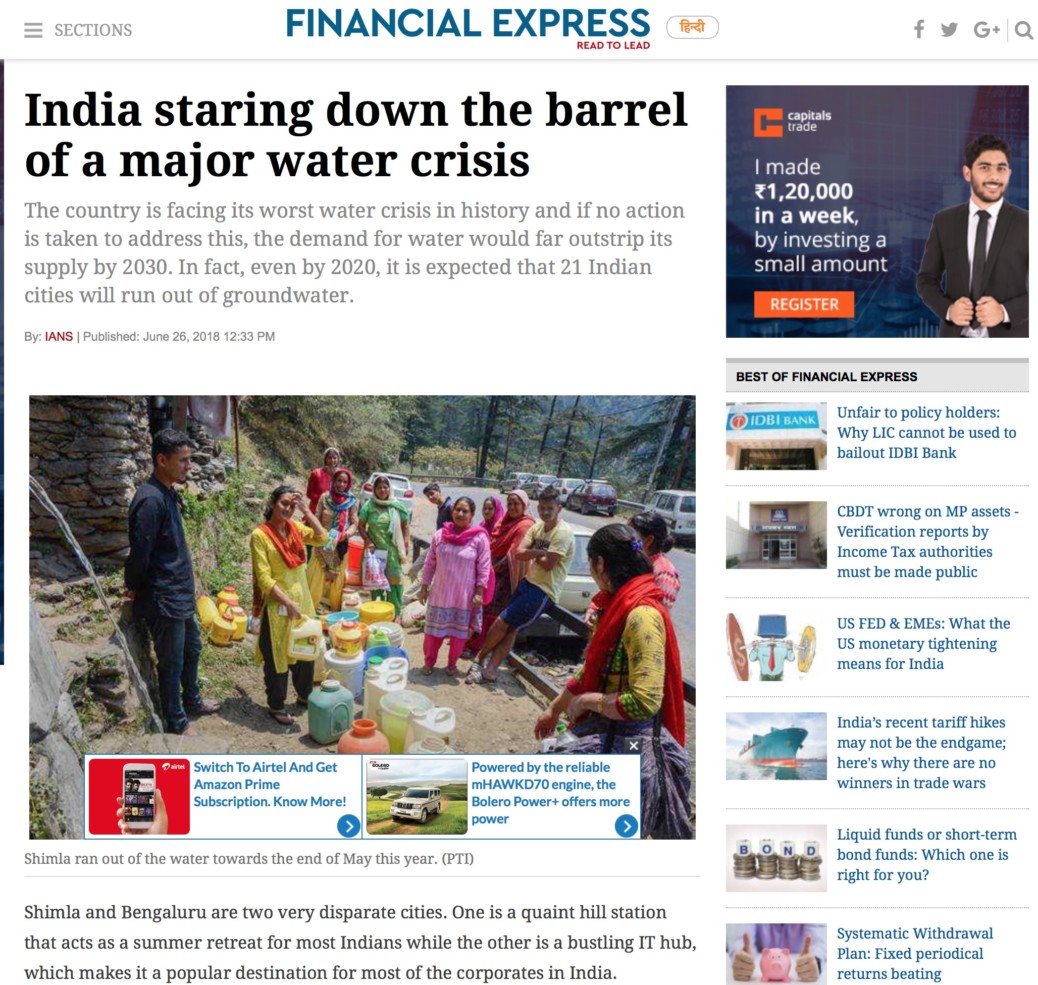 India staring down the barrel of a major water crisis

Shimla and Bangalore are two very disparate cities. One is a quaint hill station that acts as a summer retreat for most Indians while the other is a bustling IT hub, which makes it a popular destination for most of the corporates in India. Both are poles apart and, quite aptly, situated in opposite ends of the country. The only sliver of commonality between the two cities is the unfortunate water crisis that is currently afflicting daily life in both regions. Shimla ran out of water towards the end of May this year while earlier Bangalore was listed as one the cities in the world that were most likely to suffer a similar fate.

Recently, the NITI Aayog released a report that highlighted the gravity of the water situation in India. As per the report, India is facing its worst water crisis in history and if no action is taken to address it, the demand of water would far outstrip its supply by 2030. In fact, even by 2020, it is expected that twenty-one Indian cities will run out of groundwater. The pitiful scenes of Cape Town residents lining up for their daily quota of water dreading the day when the city turns off its taps could soon be seen closer home.

The crisis is mainly being brought about by three specific factors: climate change, pollution and poor farming practices.The exceptionally hot summers and shortened winters are resulting in retreating glaciers of the Himalayas, which feed most of the northern rivers of India. The erratic monsoons are further worsening the situation throughout the country. This has led to an escalation in river disputes among states. At least six states are in constant conflict over the Yamuna in the north, the Narmada in mid-west and the Kaveri in the south.

Water pollution is another source of the crisis. All waterbodies in India within or near populated areas are contaminated with organic and hazardous pollutants. Bangalore’s Bellandur Lake is a case in point. The water body is so toxic that methane fires regularly break out on its surface. Due to such pollution levels, not a single Indian city can provide clean tap water throughout the day. Even the groundwater situation is dismal. A lack of proper wastewater treatment that is spewed from domestic and industrial sources has led to progressive contamination of groundwater posing health risks to those who depend upon it for their daily use.

Another factor which can be said to one of the major reasons for the increasing stress on water tables is the prevalence of poor farming practices across India. By some estimates, Indian agriculture accounts for about 90 percent of the country’s annual domestic water consumption. Due to a lack of reliable irrigation sources, farmers usually depend on underground sources of water. Over the last three decades, there has been an explosive growth of private tube-well construction across Indian farms. Since farmers are provided with free electricity, it often leads to excessive pumping. Between 2004 and 2011, the groundwater usage escalated from 58 percent to 62 percent and the trends have not changed since. In fact, India now uses more groundwater than China and the US combines. Consequently, the country has witnessed a sharp drop in its water table levels.

India can do little about climate change in the short-term, but a lot can be done for the latter aspects. NITI’s efforts to build a Composite Water Management Index (CWMI) is a commendable step towards data-based policy making. The index aims to benchmark state-level performances based on water indicators against a clear baseline. However, it needs to be ensured that findings of these performance indicators percolate into actionable policy at the ground level.

Also, issues like pollution and exploitative farming practices need to be addressed on a national scale. The central government could look at Israel and Singapore for possible solutions. Israel is a largely arid region that has developed a model for sustainable water consumption. The country has a state-of-the-art centralised water management system with desalination plants that allows the use of waste water for farming. Israeli farms also use drip irrigation that involves dripping water right into the roots of the crops instead of flooding entire fields, which is a common practice in India. Likewise, Singapore also boasts of an efficient water treatment system along with huge reservoirs and catchment areas that cover almost two-thirds of the city-state’s surface area and collect natural water.

It is promising to see the government taking proactive steps to stem the problem before it becomes unmanageable. Hopefully, a shift in water management will become visible at the ground level. Any laxity will have disastrous consequences as the issue will have an impact on every aspect of the economy, especially agriculture, which still employs almost half the country’s population.