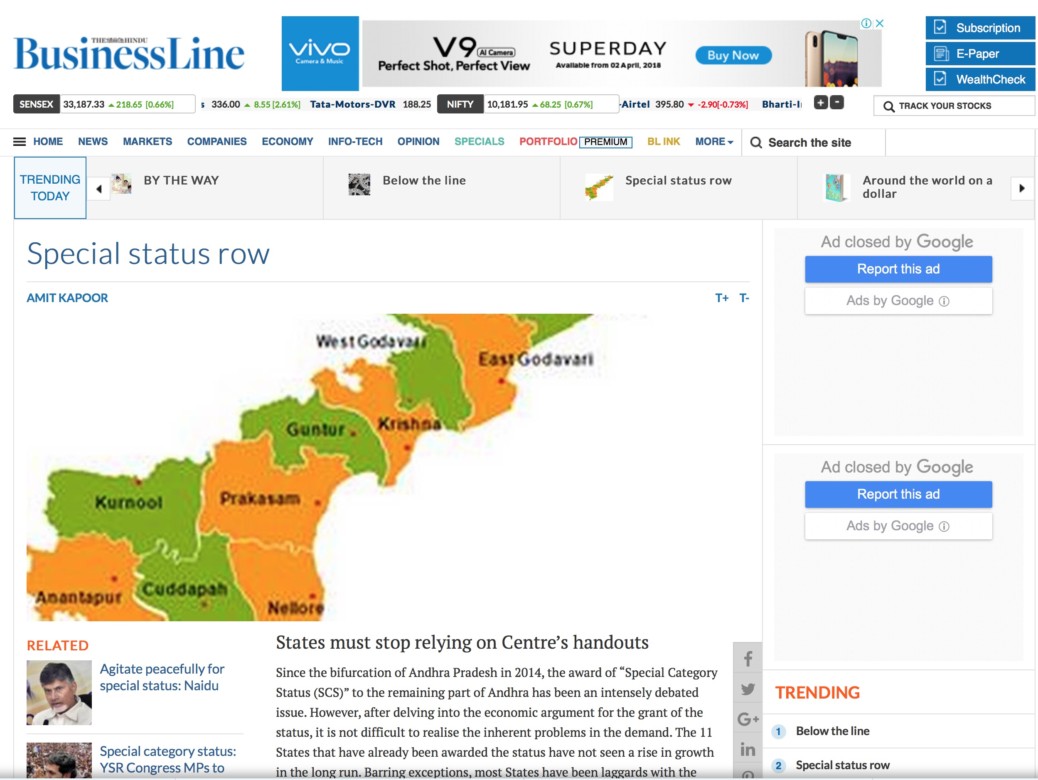 Since the bifurcation of Andhra Pradesh in 2014, the award of “Special Category Status (SCS)” to the remaining part of Andhra has been an intensely debated issue. However, after delving into the economic argument for the grant of the status, it is not difficult to realise the inherent problems in the demand. The 11 States that have already been awarded the status have not seen a rise in growth in the long run. Barring exceptions, most States have been laggards with the growth in real per capita SDP (2005-2015) being significantly lower (between 4-5 per cent) than the average growth of 6 per cent. This shows that these States’ future depends something more than the SCS package.

During 2014 when the bifurcation was under way, the residuary Andhra State sought the SCS arguing that it had been left disadvantaged due to the loss of capital Hyderabad to the newly carved out State — Telangana. The then Prime Minister Manmohan Singh in response promised in the Rajya Sabha that the status would be extended to the successor State for five years although it was not a part of the Andhra Pradesh Reorganisation Act.

In a series of events that followed, the bifurcation has only left a distressed legacy with the demand for the status again reverberating recently in Parliament.

The actual battle started when the 14th Finance Commission (2015-20) scrapped the distinction between general and special category States. Inter-State inequalities was sought to be addressed by allocating adequate resources through tax devolution and grants which were increased from 32 per cent to 42 per cent. Andhra was one of the States the Commission recommended for a revenue deficit grant where devolution alone would be insufficient.

The BJP, which had promised granting the SCS to Andhra during the 2014 general election campaign, has not been able to award the status after coming to power citing “technical” reasons. Instead, a “special financial package” was announced consisting of tax concessions, funding for different projects and other special assistance.

However, protests were staged throughout Andhra in early 2017 asking categorically for the SCS clearly reflecting the angst and the sentiment of the people. Following this, the Finance Minister on various occasions has been pushing for the special package but now the issue has become a serious bone of contention with the State’s MPs protesting in both the houses of Parliament and the Telugu Desam Party pulling out of the NDA government.

The perception that Andhra is currently disadvantaged is misleading as industries such as communications, business, and local community services are doing reasonably well there. But if one argues that the commitment made earlier should be kept and that rules cannot be changed in retrospect, how does then one grapple with the idea of competitive federalism?

Though the SCS could deliver monetary benefits for Andhra, it makes little economic sense for the Centre.

States must understand their industrial strengths and create a policy environment to leverage their exclusive resources instead of relying on Centre’s support.

So the current row between Andhra and the Centre seems more one of political gamesmanship. Also we cannot have a situation where more than half the States hold Special Category Status.

The article was published with The Hindu Business Line on April 2, 2018.