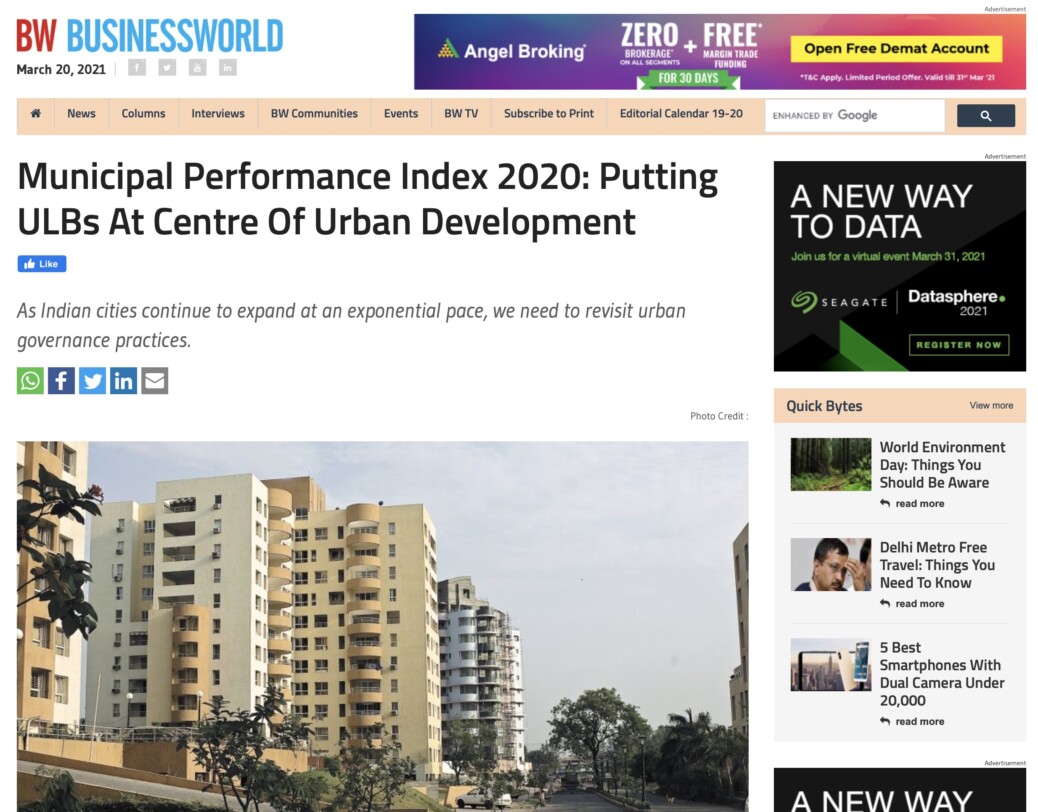 Since the 74th Amendment Act gave constitutional recognition to Urban Local Bodies (ULBs) as the third tier of governance in 1993, municipalities have become pivotal to urban governance. The local governments are positioned at the grassroots, closest to the citizens, which makes them the final link in delivering the Central and State’s development initiatives. Their functioning not only determines a city’s development trajectory but also speaks of the level of decentralisation achieved.

In the last 28 years since the passage of the amendment, the urban population has been rapidly expanding, necessitating a closer assessment of municipalities. With urbanization posing newer challenges with respect to governance and policy choices, it is crucial to answer the question of whether ULBs are able to provide a good quality of life to the citizens. The answer is tied to another question: Are municipalities empowered enough to efficiently function to meet these challenges?

India’s first-ever Municipal Performance Index (MPI) released by the Ministry of Housing and Urban Affairs sheds more light on ULBs, with the objective of strengthening urban local governance. The MPI ranks 111 municipalities on the basis of their functioning across five key vertical of Services, Finance, Planning, Technology, and Governance, which span 20 sectors and 100 indicators. The MPI complements the Ease of Living (EoL) Index that assesses the quality of life in cities.

As EoL presents the development outcomes, the MPI evaluates the inputs or enabling factors that explain those outcomes. By positioning municipalities as the key enablers of development in cities, the MPI puts local governments at the centre of urban governance discourse. This is a significant departure from past evaluative strategies that focused on Centre or States, with the ULBs taking a backseat. These practices were a reflection of the ground reality that States exercise considerable control over the functioning of municipalities, leaving them with little power to deliver on their roles. Thus, municipalities have often been absent from the discussions on urban governance. The findings of the MPI reveal as much. As per the analyses, effective decentralisation is yet to be realised in cities.

The evaluative exercise finds that some local governments lack jurisdiction over essential services like health and education, which require governance and decision-making at the ground level. Many municipalities have also been found to lack financial autonomy, which limits their ability to raise finances, leaving them dependent on Central and State grants. This lack of autonomy of ULBs in financial and administrative decisions prevents them from meeting the compounding urban developmental challenges.

The MPI, by shifting the focus on local governments, can be instrumental in driving the States towards devolving greater power to the ULBs. In the MPI 2020, Indore and New Delhi MCD have topped the rankings among municipalities having over a million population and municipalities having less than a million population, respectively. The ranking system seeks to stimulate competitiveness among municipalities, to prompt them to not only improve their functioning but also learn from their peers in the process. Since functioning of municipalities is intricately tied to the level of decentralisation in effect, the drive to improve the performance and thereby the national rank of municipalities can lead to greater autonomy granted to them by the States.

As Indian cities continue to expand at an exponential pace, we need to revisit urban governance practices. The MPI’s approach reinforces decentralised governance, making it an effective tool to improve the governance of cities and unlock the growth potential of urban India.

The article was published with Business World on March 14, 2021.