Can Asia regain its former glory? 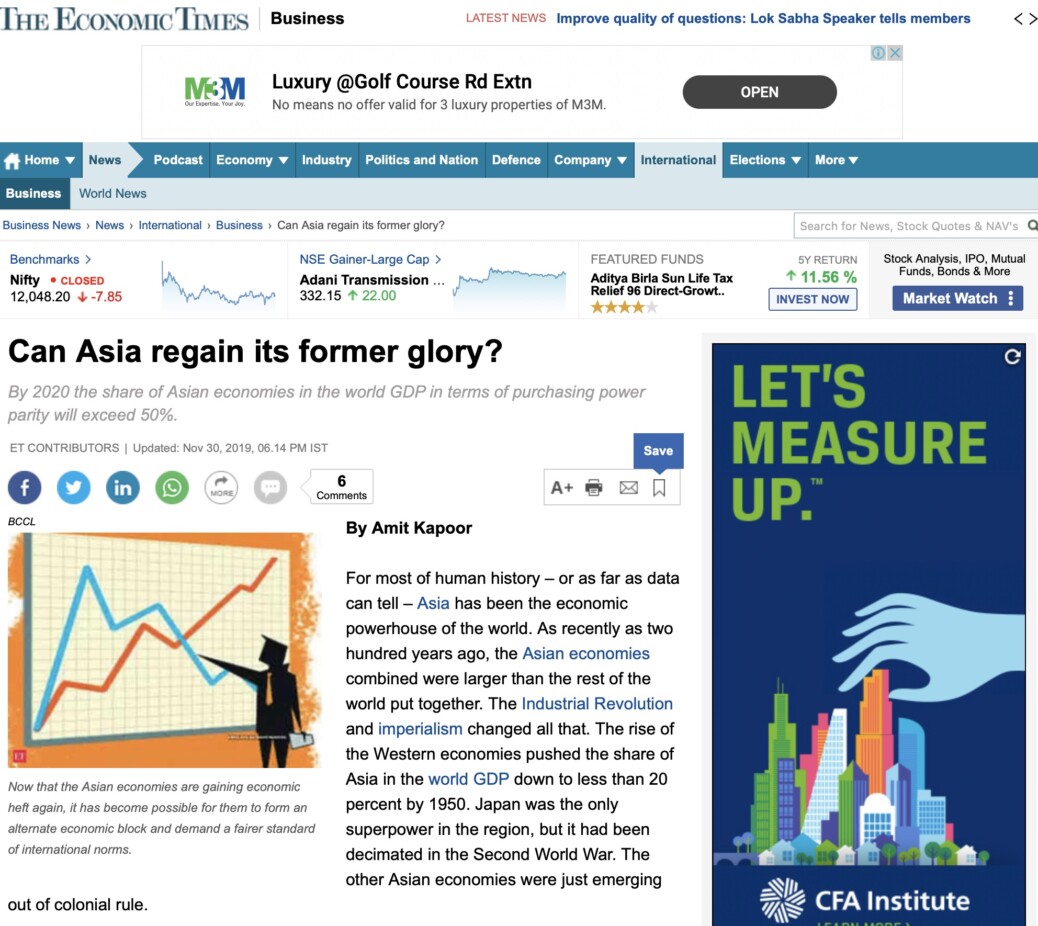 Can Asia regain its former glory?

For most of human history – or as far as data can tell – Asia has been the economic powerhouse of the world. As recently as two hundred years ago, the Asian economies combined were larger than the rest of the world put together. The Industrial Revolution and imperialism changed all that. The rise of the Western economies pushed the share of Asia in the world GDP down to less than 20 percent by 1950. Japan was the only superpower in the region, but it had been decimated in the Second World War. The other Asian economies were just emerging out of colonial rule.

However, the era of Western dominance is soon coming to a close. It is estimated that by 2020 the share of Asian economies in the world GDP in terms of purchasing power parity will exceed 50 percent. To put matters in perspective, Asia accounted for a little more than a third of the world’s output in 2000. It is about time that Asia regains its former dominance considering the fact that the sprawling continent is home more than half of the world’s population.

The growth phases of the continent can be divided into three periods. The first period lay in the decades immediately following World War II when the economy of Japan revived, and the East Asian growth miracle occurred with the rapid industrialisation of Hong Kong, Singapore, South Korea and Taiwan – the so-called Asian Tigers.

The second period began in the 1980s with the emergence of China following the reforms introduced by Deng Xiaoping. India also undertook a series of reforms in 1991. The economic growth in both countries extricated the largest amount of people out of poverty ever in human history. The third period has recently begun with the emergence of economies like Vietnam, Indonesia and Bangladesh. This period asserts the fact that the Asian resurgence is not led by a few major economies but is backed by a diverse set of countries.

There are two major implications of this spatial economic shift towards the East. First, the global economic order can and should witness a shift from the status quo. It is currently based on the system of institutions that were set up after the World Wars including the Bretton Wood twins – IMF and World Bank. These institutions were established by the West to suit Western economic interests. One of the prime evidences of Western leanings of the modern economic institutions has been highlighted by Ha-Joon Chang in his book Kicking Away the Ladder, in which he provides a strong critique of the ‘Washington Consensus’ – the set of policy recommendations for economic growth prescribed to many developing economies in return for loans.

As per these set of policy prescriptions, the developing countries are required to have “good policies” including a liberal trade and investment regime along with “good institutions” like democratic governments, strong intellectual property rights and transparent private establishments. The only problem is that the developed economies of today that have become the mouthpiece of these ideals never had similar policies when they were ascending the economic ladder. In fact, these countries practiced protectionism through higher tariffs among other things. Having developed, these countries have now kicked away the ladder so that other economies cannot climb up to their level.

Now that the Asian economies are gaining economic heft again, it has become possible for them to form an alternate economic block and demand a fairer standard of international norms. However, this is easier said than done. Since China has climbed relatively high on the economic ladder, it has little incentive not to kick it away and keep other Asian economies at arm’s length.

The second implication of the rise of the Asian economies is probably a bit more concerning. The idea of democracy is a Western one and very few countries in Asia uphold those values. Some of the successful economic stories have emerged from places like Singapore and China that are very tightly controlled states. Thus, there is a possibility that with the rise of Asia, democracy and democratic values might slowly be side-lined. It will be upon countries like Japan, India and Indonesia that still have functioning democracies to uphold those values.

Thus, with the resurgence of the Asian dominance on the world stage, the status quo is set to be challenged at different levels from the economic to the social basis upon which the world rests. On the economic front, a renewed approach might be what the world economy needs. The failure of the world economies to kickstart growth since the global economic crisis a decade ago has brought the limits and problems of the established neoliberal order to the forefront. A fresh economic approach towards development led by Asia can be the answer. But simultaneously, the world must also be wary of preserving the spirit of democracy in the Asian age. It shall be a tough balance to maintain. Challenging times await.

The article was published with Economic Times on November 30, 2019.