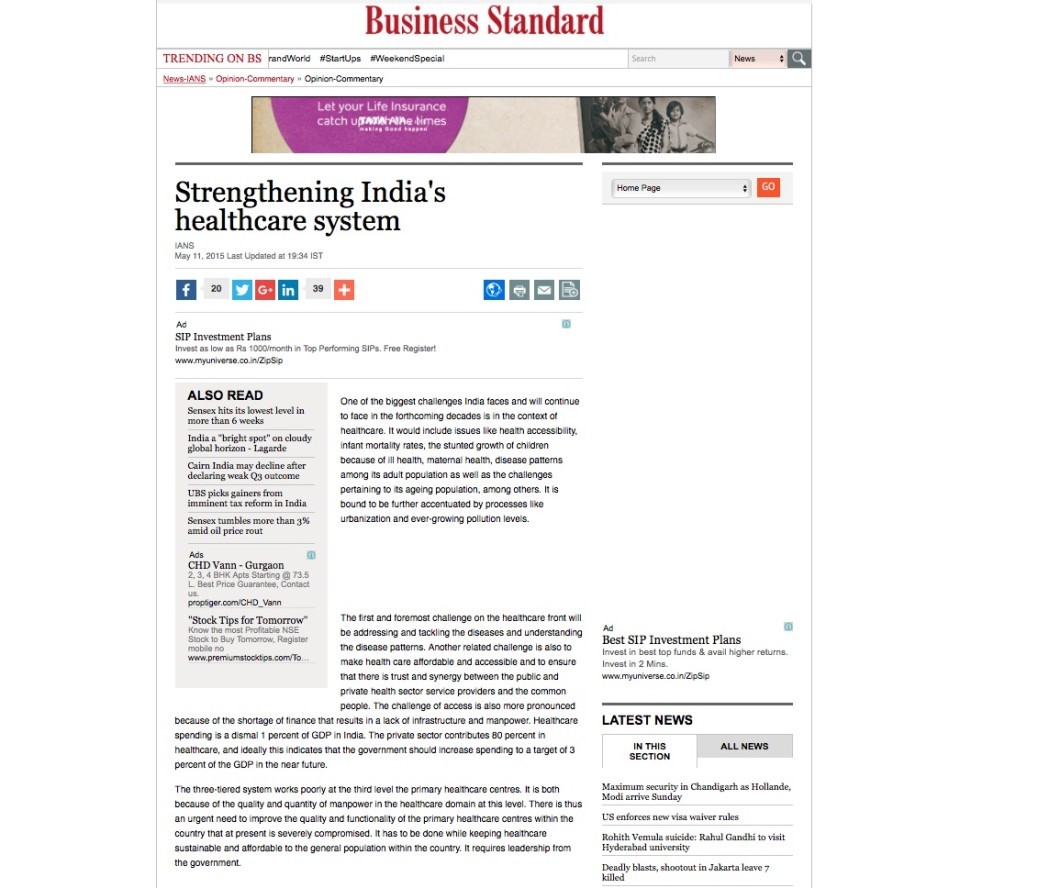 One of the biggest challenges India faces and will continue to face in the forthcoming decades is in the context of healthcare. It would include issues like health accessibility, infant mortality rates, the stunted growth of children because of ill health, maternal health, disease patterns among its adult population as well as the challenges pertaining to its ageing population, among others. It is bound to be further accentuated by processes like urbanization and ever-growing pollution levels.

The first and foremost challenge on the healthcare front will be addressing and tackling the diseases and understanding the disease patterns. Another related challenge is also to make health care affordable and accessible and to ensure that there is trust and synergy between the public and private health sector service providers and the common people. The challenge of access is also more pronounced because of the shortage of finance that results in a lack of infrastructure and manpower. Healthcare spending is a dismal 1 percent of GDP in India. The private sector contributes 80 percent in healthcare, and ideally this indicates that the government should increase spending to a target of 3 percent of the GDP in the near future.

The three-tiered system works poorly at the third level the primary healthcare centres. It is both because of the quality and quantity of manpower in the healthcare domain at this level. There is thus an urgent need to improve the quality and functionality of the primary healthcare centres within the country that at present is severely compromised. It has to be done while keeping healthcare sustainable and affordable to the general population within the country. It requires leadership from the government.

The pharmaceutical industry’s capacity utilization in India is 45 percent. It can be increased to 55 percent with a strategic vision for accessibility and access to medicines at affordable prices. There are a few things that the government can do for boosting growth within the healthcare space. It includes doing away with inefficient spending, looking at outputs rather than constraints in healthcare expenditure as well as doing away with the regulation of prices of drugs barring the necessary medicines, etc. Also, telemedicine and e-consultations hold promise for the vast majority of common ailments. However, building infrastructure and expertise is critical for improved access.

The contrary view is that the Government that makes budgetary allocation cuts towards healthcare has to be seen from a sympathetic view. The sympathetic view is driven by the idea that it does not make sense to throw money at a system that hardly works, performs or is a big black hole. The ideas also push towards thinking that a new approach and system is required that redefines the way we look at the healthcare system in the country.

The universal health argument boils down to two things. First, something needs to be done to remove people out of poverty and penury. It can happen only with greater opportunity for employment. Also, 40 million people are impoverished because of the health burden – out of pocket expenses. In India, the out of pocket spending is 70 percent. It has to be reduced. The second deals with designing a healthcare system. The healthcare system has two cornerstones namely satisfaction from the health system and sustainability of healthcare system for everybody. Similar to the other social security schemes a social security scheme for health insurance should be floated that ensures increased health care from the scheme when the person suffers from an ailment. It is like making essential drugs available to people for free through insurance.

Thus, the government has to make a healthcare delivery framework where trust is embedded as the basis of the framework. The government also has to rethink how the framework is set and implemented. It requires reform and building a system that is trustworthy at the same time responsive to the needs of a low resource setting. Use of technology for reducing access as well as transaction costs can also help in building a better framework. Also, there is a need to fix accountability and responsibility where it is due especially to the private sector where there is a profit motive involved. Doctors should be driven by ethical and professional principles rather than just a profit motive. The government also has to look at the long-term vision and the health challenges being faced by the country. It involves greater investments and doing away with redundant laws if the need so arises. In addition, the framework has to look at the concept of health audit, to measure the performance of hospitals. The doctors may initially resist this practice, but the accreditation of hospitals would be a good start for measuring the performance of Hospitals that improves healthcare delivery over time. Improvements happen when proper systems are designed with proper documentation and process flows.

A new health system can be designed along with universal access only when medicines are looked at in a new light. It is because medicines play a key role for health needs in a developing country like India. Medicines need to be a part of the health insurance in India as 72 percent of the health expense is on medicines in India. Also required is a new ministry under a minister for state for pharmaceuticals that assists India in developing and catering to the medicinal needs of the population. Also, the need is to look at incentive structures in healthcare, as the cost of health is identical to income; investments by public money are far greater in other countries as compared to India. It can be viewed as a long-term sustainability issue, and the system has to be based on outcomes rather than expenditure figures alone.

The new system can be designed with common principles of competition, regulation, equity and access. While these can be the guiding principles a one size fits all approach to healthcare needs of an individual state may be detrimental to effective healthcare governance. The government has to take leadership in investing more and enabling greater participation through the PPP mode that is just one of the ways of enabling greater public-private participation. What is required is a system of checks and balances. The government needs to kickstart the process and provide a vision. This is where the country faces its biggest challenge, the challenge of dissonance between the political vision and effective implementation.

Published in Business Standard on May 11, 2015. To know more